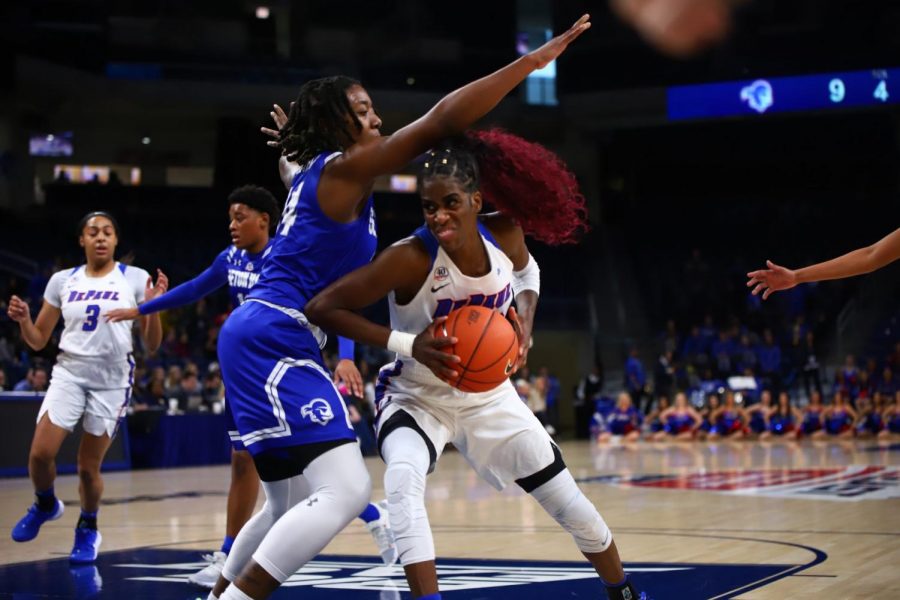 DePaul always knew that they’d get every team’s best shot down the stretch of the grueling Big East tournament. When they got that, they also knew they would need to respond with their best play. Yet when it gets down to the Big East tournament, teams tend to trade blows back and forth and that’s exactly what happened in their 83-80 gritty semi-final win over Seton Hall on Sunday night at Wintrust Arena.

The first quarter started perfectly for the Blue Demons, who went on a 13-5 run to start the quarter capped by a Lexi Held layup on an inbound pass from Chante Stonewall. From there, Seton Hall began to hit with guard Alexis Lewis hitting from around the floor to help the four seed Pirates get back into the game at 13-13.

Shadeen Samuels got a few post up looks to start the game and the guard/forward delivered a few points but the Seton Hall attack was benefitting off the misses on the DePaul end, who went scoreless for three minutes.

Seton Hall would take a 22-21 lead for their first lead of the game on a hook shot from Desiree Elmore. DePaul would pull level going into the second quarter at 24-24. Kelly Campbell had 11 points on 3-of-4 shooting from deep in the first ten minutes.

The Blue Demons got off to yet another great start in the second quarter, with a 10-0 run giving them a boost to start the second quarter, going up 36-26. Yet once again the Pirates hung around, with Elmore and Alexia Allesch scoring against DePaul’s zone to pull them back within three.

Elmore scored 12 points on perfect 6-for-6 shooting in the second quarter, with all of her points coming in the paint. The junior had 17 points and six rebounds in the first half.

DePaul would extend their lead to 50-41 off a Campbell three-pointer, the senior finished the first half with 16 points to lead the Blue Demons. But Seton Hall kept it within reason at 50-46 after Samuels closed the half with a layup.

Held played the first 8:54 of the game but sat out for the rest of the half after picking up two early fouls. The sophomore guard returned to start the second half, getting the first bucket of the second half for the Blue Demons on a drive and responding with a three on the next two possessions to take a 58-49 lead with seven minutes remaining in the third quarter.

“I knew in the first half, I had to sit because of my fouls so I was just trying to do whatever I could to help my team,” Held said.

Seton Hall freshman Lauren Park-Lane ran the offense for the Pirates, who only turned the ball over seven times against a DePaul team that forces over 21 a game. The 5’6” guard scored on a floater to stop the bleeding from Held’s 8-0 run.

Elmore pulled Seton Hall within seven points after scoring a layup through contact from Deja Church. After an offensive rebound, Elmore scored again to cut it to five. Elmore reached 24 points in the third quarter, as the Pirates kept it within three, with DePaul leading 70-67.

We understood that the fourth quarter is where everything is going to need to be perfect or at least close to perfect, and we knew our shots were going to fall, we play DePaulBall for a reason, so we got to keep shooting,” Stonewall said.

After a Samuels layup, Held knocked down two free throws to keep the Blue Demons up six. Yet Lewis hit a three with a minute left to keep Seton Hall well within the game. With the Blue Demons up by 3, Deja Church traveled to give the Pirates the ball with 7.8 seconds left.

DePaul had four fouls to give and fouled on each ensuing inbound, whittling the clock down to 1.5 seconds left. On the possession out of the timeout, Park-Lane inbounded the ball to Alexis Lewis who air-balled a turnaround three-pointer on the left wing as the clock expired. DePaul came out by the skin of their teeth, 83-80.

Church finished with eight points, 11 rebounds and six assists. “She’s really explosive and once it starts dawning on you that every time you get a rebound from your team it’s worth a point, even though it doesn’t show up as a point in the boxscore, it’s huge,” head coach Doug Bruno said.

The Blue Demons advance to their sixth final appearance in seven years on Monday night at 7 p.m. at Wintrust Arena.