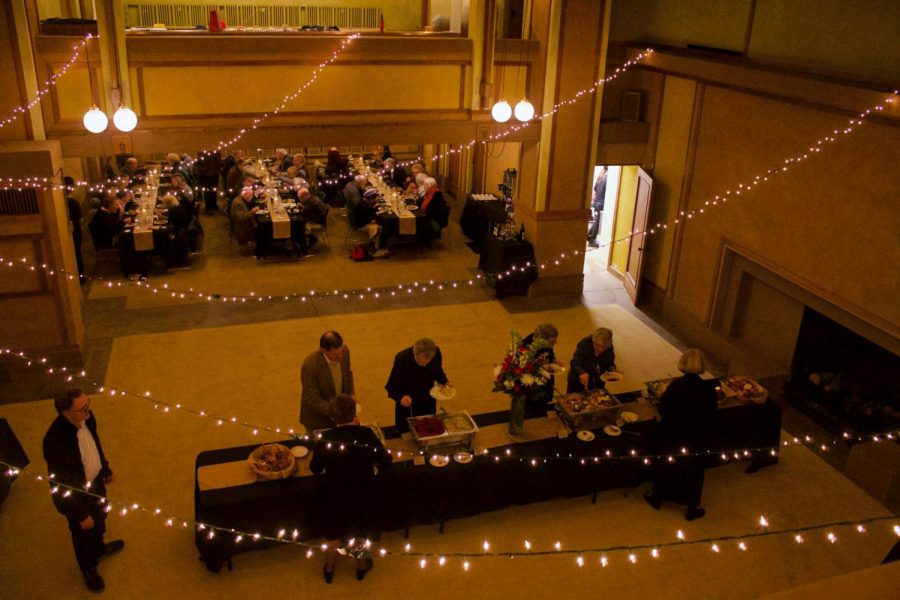 Attendees gathered at the Schubert Festival in Oak Park at the famous Unity Temple.

A Schubertiade is a social gathering with the primary purpose of performing Franz Schubert’s music. Schubert + Festival gathers to do exactly that.

The four-part festival on Feb. 29 started at 2:30 p.m. and continued through 9:30 p.m., which included an Austrian-style dinner. The intermittent breaks between the performances allowed attendees to explore the 112-year-old temple, which is a UNESCO World Heritage site.

The prolific Austrian composer produced more than 600 secular vocal works, seven symphonies, 50 choral works and many piano and chamber pieces, all in a life span of 31 years.

“Yes, he has large scale works, but he wrote a lot of music that was made for a more intimate space, such as this,” said Winston Choi, pianist and professor at Roosevelt University. “His music lends itself to these types of all-day festivals.”

The gatherings usually take place around Jan. 31 to celebrate Schubert’s birthday. The tradition was started by his fans and contemporaries, and it continues today where Schubertiades are housed in multiple venues across Chicago. The tradition became a way to remember and commemorate the composer’s work after his untimely death from syphilis.

“If Shubert lived more comfortably not knowing there was an end in sight, who knows what his music would be like?” Choi said. “Maybe he wouldn’t have gained the same inspiration that one gains when one feels like, ‘This is the end.’”

Filling in for CSO cellist Brant Taylor in the octet was fellow section member Ken Olson who had a concert at Orchestra Hall after the Schubert and Fest performance.

“Schubert is definitely one of my favorites, especially for chamber music,” Olsen said. “The older I get, the more I love Schubert, I don’t know why. Every chance I get I jump on it.”

What started as small gatherings in private homes among friends has expanded to all day festivals fetching international talent.

“It’s rare for me to play only Schubert in a program,” Choi said. “I usually try to mix and match a little bit, so to play that much of it was enriching for me. To go completely into it and be swallowed whole was special for me.”

The Unity Temple maintains the intimacy of traditional Schubertiades. No attendee is further than 45 feet from the pulpit, which makes it so there is not a bad seat in the house. Wright designed the room to fit a large crowd without sacrificing the intimacy or comfort of the space.

“[Schubert Fest] means bringing together people from different walks of life,” said Michael Weeks, president of Unity Temple Choir and production manager of Schubert Fest. “It means celebrating quality talent on a small scale. To bring it here to a local venue is a gift. To get someone of Lawrence Brownlee’s caliber here, that’s a huge gift.”

“They say that your profession, the thing you should be doing, finds you,” he said. “I thought I was going to pursue a career in law. I had a lot of people that encouraged me and pushed me to sing because they thought my voice was special. Now here I am.”

Brownlee said that a central part of being a professional musician is to “be an expressive artist. Feel it somewhere inside, feel it deep. Be someone who is listening but always learning.”

With accolades that would humble even the highest caliber classical musicians, Brownlee has a reputation for being approachable and personable.

“I just fell in love with him.,” Zimmer-Loew said. “He has a certain presence and charm about him. I had to see him again.”

Zimmer-Loew approached Brownlee to express that she was a fan of his singing. Brownlee thanked her: “I don’t have fans, I have friends,” he said.

Each year the festival slots out a select amount of tickets for students and children to attend the festival for free. This is part of an initiative to bring the Schubertiade tradition to the next generation. Schubert + Festival plans to celebrate the colorful body of work again in 2022 with the same energy brought to the 2020 festival.