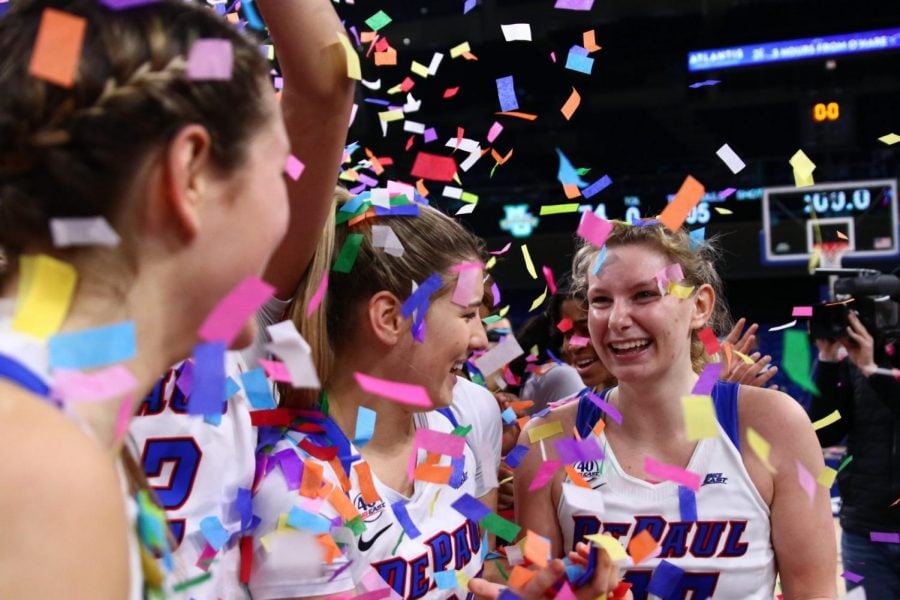 Lexi Held and Dee Bekelja celebrate after the game, both players were a part of last year's championship win over Marquette.

The DePaul women’s basketball team won the Big East Tournament final just like how they had won 27 other games this season, together. It was a balanced attack that saw sophomore guard Lexi Held score 31, as seniors Chante Stonewall and Kelly Campbell poured in 22 and 16 each. DePaul’s all-out defensive and offensive attack was too much for Marquette to handle as they dispatched them 88-74 to win their third straight Big East tournament.

Everything was tight from the start of the first quarter. Marquette forward Lauren Van Kluenen got the Golden Eagles’ offense going with eight points, all coming in the paint where she was guarded by various shorter Blue Demons.

The Golden Eagles slowed the pace down a little bit, forcing DePaul to take tough shots that weren’t falling, as the Blue Demons went 3-for-13 from the field to start the game, trailing 18-12 with 2:11 left in the quarter.

Although matching Van Kluenen’s production was Stonewall, who’s 3-pointer cut the 18-12 deficit to three with 1:22 left. With the clock winding down, Held hit a baseline jumper to cut the game to 18-17 after the first quarter.

“I think they started to feel that the energy defensively was working and they made plays in the quarter court in the second quarter, not just the fullcourt,” DePaul head coach Doug Bruno said.

Some of those plays included Sonya Morris flying in to stop Van Kluenen and get a steal. Morris had a career-high six steals in the first half alone. “She just brings energy, she brings a mojo, she brings a fight to the game that you just love as a coach,” Bruno said.

Selena Lott scored nine points in the second quarter for Marquette, but nobody else on the team could muster up more than 2. DePaul shot 5-for-7 from deep with Held and Campbell each hitting two.

“That’s just how we play, I mean every shot that we shoot we shoot at practice,” Held said. “Having the freedom that we have just really helps.”

The Blue Demons broke the Big East record for 3-pointers in a tournament with 43 over three games.

With the success of the second quarter, the Blue Demons held a 45-33 lead going into the second half.

In the second half, Campbell opened with a three and Held followed up with a baseline jumper to force Marquette coach Megan Duffy to call a timeout. Van Kluenen did not play a minute in the third quarter, even when she had just one foul.

Marquette took just seven shots in the third quarter and Stonewall and the rest of the defense stepped up big time. Stonewall took a charge with 6:25 left in the third quarter while up 56-37 and went down the other end hyped off her play. After that, she dove for a loose ball, getting a jump ball as the DePaul pep band began to chant her name.

Stonewall has played 12 games against Marquette in her career, with some of her best performances against them. “[Marquette] definitely brings the best out of us, like I said it’s one of those games you really look forward too,” Stonewall said. “You definitely get the most competitive game up and down.”

Held’s 31 points garnered her the Most Outstanding Player award for the Big East Tournament.

All the Blue Demons had to do in the fourth was to keep up the intensity they had brought all game long. Van Kluenen scored 12 points to add to her 22-point effort on the night. But DePaul prevailed and with one minute remaining, Stonewall, Campbell, Held, Morris and Maya Stovall checked out as they led 88-71. The DePaul cut of the crowd of 2,340 got on their feet and cheered for a standing ovation.

Once the clock hit zero, DePaul completed a three-peat in the Big East tournament, a feat that only UConn has achieved in the Big East. “It was great to get a standing ovation and really just get a great team win,” Campbell said.

The Blue Demons await their seeding in the NCAA tournament, which will be announced on Monday at 7 p.m.