COLUMN: Coronavirus robs sports fans of their most cherished outlet 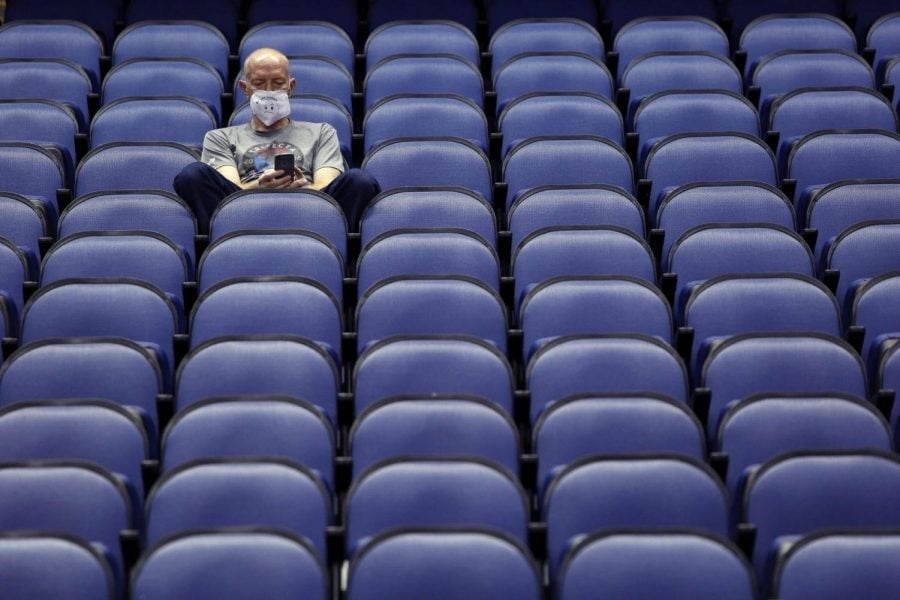 Mike Lemcke, from Richmond, Va., sits in an empty Greensboro Coliseum after the NCAA college basketball games were canceled at the Atlantic Coast Conference tournament in Greensboro, N.C., Thursday, March 12, 2020.

I’ve always tried to imagine a world with no sports. What would we do? Would we like it? What would be our new escape from the real-world problems we face on a daily basis? The answers to those questions led me back to one realization — don’t let this become a reality.

The world that I imagined in my head was scary and boring. For a lot of people, sports is how we cope with our personal issues and it has been unimaginable to think we wouldn’t have that escape anymore, especially in the month of March.

March is the best time of year for so many reasons. Not only is it the beginning of the end of winter, but it’s also the start of the most exciting season of sports. The NBA and NHL regular seasons are coming to an end with the playoffs just around the corner. Spring Training is in full force and Opening Day is just around the corner. For an avid golf fan like I am, March gives us The Players Championship and then the Masters Tournament three weeks later.

This is also the time of year where conference tournaments are being played, and Selection Sunday is a couple of days away, with March Madness set to follow. This is the month every college basketball fan has been waiting for, and every player and coach have worked their entire lives for.

But it has been taken away from us. It’s gone. The season has been wiped away. No conference tournament champions and no national champion. The NCAA announced on Thursday that all winter and spring championships have been canceled because of the coronavirus concerns, with the Big East also canceling all spring sports, effective immediately.

Since I’m the sports editor of The DePaulia this year, I had the privilege to travel to New York to cover DePaul’s run in the Big East Tournament at Madison Square Garden. I fully expected DePaul to lose in the first round against Xavier because it’s DePaul — that’s what they have done in the last six years. But they didn’t lose, the Blue Demons won 71-67 on Wednesday and were slated to face Villanova the next night.

DePaul, however, did not get to face Villanova because the Big East canceled the rest of the tournament on Thursday. The Blue Demons, who started the season at 12-1 and then finished 3-15, had their season end without a chance to show how far they could have gone. It’s just on par with DePaul’s luck these last 16 years.

But Thursday became an unprecedented day in the world of sports, with professional leagues all around the world suspending their seasons due to coronavirus concerns.

Conferences around the country also decided it was better to cancel their tournaments, instead of risking the health and safety of their student-athletes and everyone else in those stadiums. By noon time in New York, almost every high-major conference canceled its tournament, leaving the Big East as the last domino to fall.

Sitting inside Madison Square Garden on Thursday, the arena was eerily quiet. The buzz that the Garden is accustomed to producing was gone because only a handful of fans were allowed into the stadium. With St. John’s and Creighton scheduled to play each other at noon eastern, there was a growing expectation that the game would be canceled. I certainly thought it would, and the rest of the tournament would be stopped. The handful of people I talked to also believed there was no way the Big East would allow this game to start, especially after seeing what other conferences have done just moments earlier.

Wrong. The conference allowed the game to be played into halftime before canceling the tournament. If you asked me what the score was going into the break, I wouldn’t be able to tell you. All I could pay attention to was Twitter and the incoming breaking news.

For the first time in a long time, the game being played on the court was not as important as what was happening outside the Garden.

Even Wednesday night, when there was no restriction on the amount of fans allowed in the arena, there was this feeling of uncertainty in the air. The news about the NBA began flowing in during the St. John’s-Georgetown game, and part of my attention switched to how the Big East would handle this. Even though a lot of my focus was on the DePaul game later in the night, I was constantly refreshing Twitter for all the information that was dropping in real time.

And a part of me felt scared. I was in this big city all alone, and there was this virus that was affecting all of us. It just didn’t feel right to cover DePaul basketball. There were more important things happening in the world, and it was impossible for me to have 100 percent of my attention on what turned out to be a meaningless basketball game.

I was sitting next to someone who covers St. John’s basketball, and all we could talk about was how the coronavirus was impacting the sports world.

When the Big East finally announced they were canceling the tournament, I was both happy and sad. I was happy because the conference was putting the safety of everyone above basketball. And I was sad because the tournament I was looking forward to covering ended after two and a half games.

“This has been the most extraordinary stretch of days I’ve ever had or ever seen in my 30-plus years of working in the sports business,” Big East commissioner Val Ackerman said in a press conference.

Ackerman and the rest of the conference made a mistake by allowing the teams to play. The game should never have happened, even if that means pulling the players off the court with two minutes to go.

“It was our view that we didn’t feel like we needed a dramatic pull-the-players-off-the-court-in-the-middle-of-the-game gesture,” Ackerman said. “Folks were here. We just literally didn’t think that another 15 or 20 minutes of game time was going to make that much of a difference.”

It was a mistake, but the conference eventually made the right decision. With most conferences stopping their tournaments and other sports suspending their seasons, it was just a matter of time until the NCAA brought down the nuclear option: canceling the men’s and women’s basketball tournaments.

A couple of hours later, the news became official. I was on my way to the airport when the notification popped up on my phone, my heart sank into my stomach. I couldn’t believe it, I was shocked they went to this extreme. The best time of the year was taken away from us.

But as much as it hurt to hear that news, it was the right decision. After most of the sports world put a halt into their seasons, the NCAA had no choice but to cancel their tournaments as well. My heart aches for all the student-athletes who have put in countless hours to play in their conference tournaments and then possibly get a chance to participate in March Madness.

Now, they won’t get that opportunity. And we now have to live in a world where there are no sports for the immediate future. It sucks. It stings. It hurts. It’s also the right decision. Our frivolous debates about who we think will win the NCAA Tournament is not important today.

Sports organizations did the right thing, prioritizing health and safety over profits and the wishes of eager fans. Unfortunately, we have to live in a world at the moment where sports just aren’t worth the risk.