What you need to know today about the coronavirus outbreak 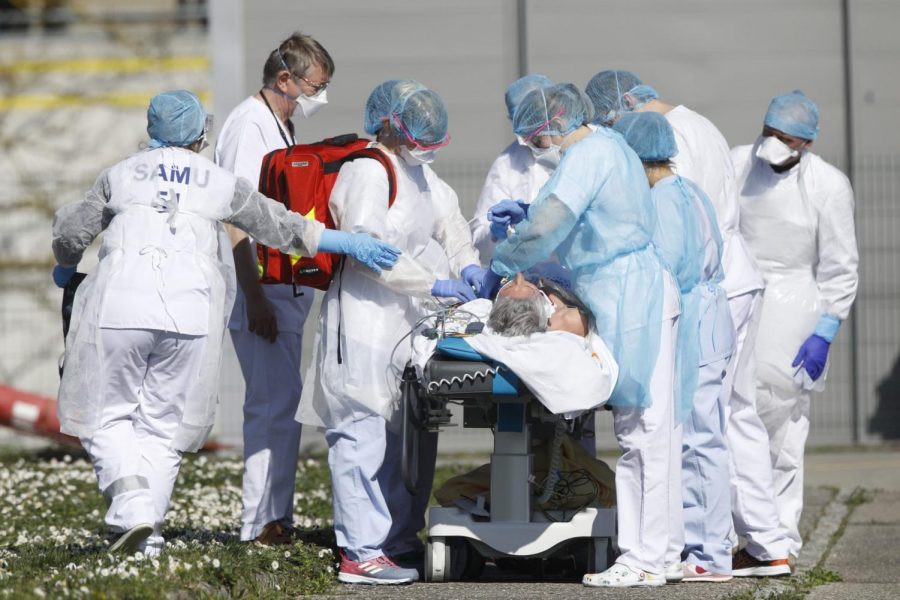 A victim of the Covid-19 virus is evacuated from the Mulhouse civil hospital, eastern France, Monday March 23, 2020. The Grand Est region is now the epicenter of the outbreak in France, which has buried the third most virus victims in Europe, after Italy and Spain. For most people, the new coronavirus causes only mild or moderate symptoms. For some it can cause more severe illness.

The head of the World Health Organization says the coronavirus outbreak is accelerating but insists “we can change the trajectory of this pandemic.” More than 1.5 billion people — one-fifth of the world’s population — were urged or ordered to stay home Monday to try to blunt the spread of coronavirus. The death toll from the global coronavirus pandemic has surpassed 14,600 people worldwide, and it has sickened more than 335,000.

Leaders in the U.S. were hammering out a rescue package that could be worth nearly $2 trillion, while the death toll in Italy soared again.

A surge in infections has caused a critical shortage of medical supplies in many places. The hunt for ventilators and other critical items is consuming Europe and the U.S. Deaths around the world passed the 15,000 mark Monday.

Here are some of AP’s top stories Monday on the world’s coronavirus pandemic. Follow APNews.com/VirusOutbreak for updates through the day and APNews.com/UnderstandingtheOutbreak for stories explaining some of its complexities.

—More than 1.5 billion people have been urged ordered to stay home to try to blunt the spread of coronavirus.

—The coronavirus has arrived in the Gaza Strip and Syria, raising fears that the pandemic may now prey on some of the most vulnerable populations in the world.

—The International Olympic Committee announced it was considering a postponement and would make a final decision within four weeks. Major Olympic nations like Canada and Australia have added pressure by saying they will not send teams if the games are staged this year.

—Those defying social distancing and lockdown restrictions from France to Florida to carry on as normal are coming under fire. One French minister was furious: “Some consider they’re little heroes when they break the rules. Well, no. You’re an imbecile, and especially a threat to yourself.”

—Grieving has become even more upsetting for families in the time of coronavirus. An untold number of burials around the globe now go forward with nothing more than a cleric, a funeral home employee and a single loved one. Others receive what would have once been called pauper’s funerals, buried in the clothes they died in.

WHAT YOU NEED TO KNOW:

For most people, the virus causes only mild or moderate symptoms, such as fever and cough. For some, especially older adults and people with existing health problems, it can cause more severe illness, including pneumonia. The vast majority of people recover.

Here are the symptoms of the virus compared with the common flu.

One of the best ways to prevent spread of the virus is washing your hands with soap and water. The U.S. Centers for Disease Control and Prevention recommends first washing with warm or cold water and then lathering soap for 20 seconds to get it on the backs of hands, between fingers and under fingernails before rinsing off.

You should wash your phone, too. Here’s how.

Misinformation overload: How to separate fact from fiction and rumor from deliberate efforts to mislead.

$300 BILLION: In a series of sweeping steps, the Fed will lend to small and large businesses and local governments as well as extend its bond-buying programs. It’s all part of the Fed’s ongoing efforts to support the flow of credit through an economy ravaged by the viral outbreak.

AP’S MARCH MADNESS: The virus may have canceled March Madness, but the AP is counting down the top 10 men’s basketball games in the history of the NCAA Tournament. We’re counting them down through April 5, along with a host of memorable moments through the eyes of players who were there.

The Associated Press receives support for health and science coverage from the Howard Hughes Medical Institute’s Department of Science Education. The AP is solely responsible for all content.