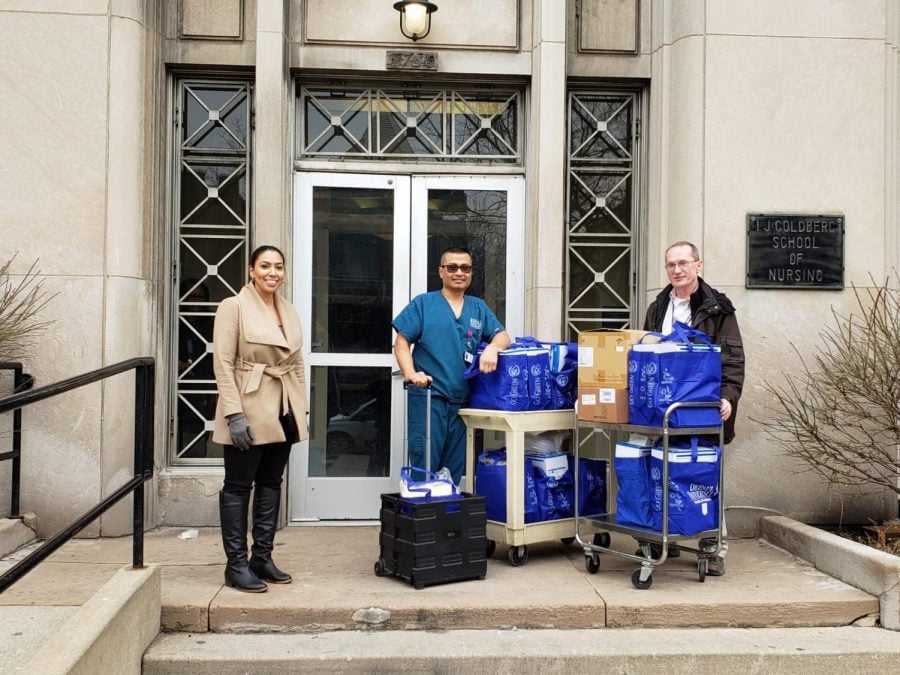 On March 20, Susan Dawson received an email from a staffer at Mount Sinai’s Holy Cross Hospital asking DePaul for help.

“We are in desperate need of masks,” read the email, which asked for other personal protective equipment (PPE), too. “I’m reaching out to our other schools also for anything you can spare.”

But Dawson, coordinator of clinical placements in DePaul’s School of Nursing, informed them that the school was already working on it. By the next day, the School of Nursing had donated all of its PPE — 1,800 sterile gloves, 1,150 examination gloves, 350 biohazard bags, 200 gowns, 150 face masks and 40 face shields.

“Ours was not being used, and there’s people out there that need it very badly,” Dawson said.

In addition to their donations to the Sinai System, the nursing school also gave to Norwegian American Hospital and Vista Health System.

The hospitals were chosen because they serve the most vulnerable and under-resourced communities in Chicago, according to Elizabeth Aquino, associate director of DePaul Master’s Entry to Nursing Practice Program, who helped lead the donation process.

“The Vincentian mission of DePaul University, moreover, the values upheld by the School of Nursing, focus on ‘what must be done’ to help address the needs of society, particularly the most vulnerable,” Aquino said.

“I have a friend who is an emergency medicine doctor at Riverside Medical Center in Kankakee and a DePaul graduate; he had posted on Facebook that he was in need of supplies and I have a lab that’s been shuttered,” said Sarah Connolly, associate professor of health and biological sciences. “… I emailed the faculty and they all told me where they had stashes of gloves. I rounded them up [on March 23] and gave them to the doctor.”

Connolly donated 12,000 pairs of gloves and 50 disposable lab coats from her department — about 95 percent of the department’s total PPE.

Almost all of the Theatre School’s donations came from their production departments, like sets and costumes, according to the school’s spokeswoman, Anna Ables. They donated 2,300 protective gloves, 152 masks, a plastic tub and hospital cleaning wipes to Amita Health, she said.

The donations were made as reports of shortages of protective gear sweep both Chicago and the nation. As COVID-19 cases continue to climb and protection for medical professionals dwindles, fear of a secondary health crisis — an overwhelmed health care system — is increasing among professionals.

“I think because we are about to see some unprecedented pressure in our emergency rooms and in intensive care units, any possible thing that we could do to help with that, we have to do,” Connolly said. “I don’t want to freak people out, but there’s a wave coming.”

That wave may be closer than some think. Dawson said that just a day after donating all the supplies, the Mount Sinai staffer who reached out to her originally asked for more.

“They’re already using what we gave them,” she said. “Now, they’re hoping for more, this time asking for things like thermometers and ventilators.”

Medical professionals who come in contact with the virus daily are already at risk. Without protective gear, that inherent risk is amplified further.

“It is unfair, unsafe, and unacceptable to expose frontline health care professionals to any infectious disease, particularly COVID-19, that we still don’t fully understand,” Aquino said. “One way to protect the frontline is by ensuring they have the proper PPE they need to do their jobs.”

With healthcare professionals out sick and emergency rooms overflowing, an overwhelmed system is all but inevitable.

“Let’s say you have appendicitis and the emergency room is full because of the virus,” Connolly said. “Well, now your appendicitis has become a very serious problem, right?”

“It’s very simple: Stay home, seriously,” she said. “There are people who think it’s not a big deal — ‘I’m young, I’m going to be okay if I get infected.’ — that’s true. You may be okay. But if you’ve infected someone else and they’ve infected someone else, it very quickly, through exponential spread, becomes you being responsible for a large group of people being infected. And some of those people are not going to be okay.”