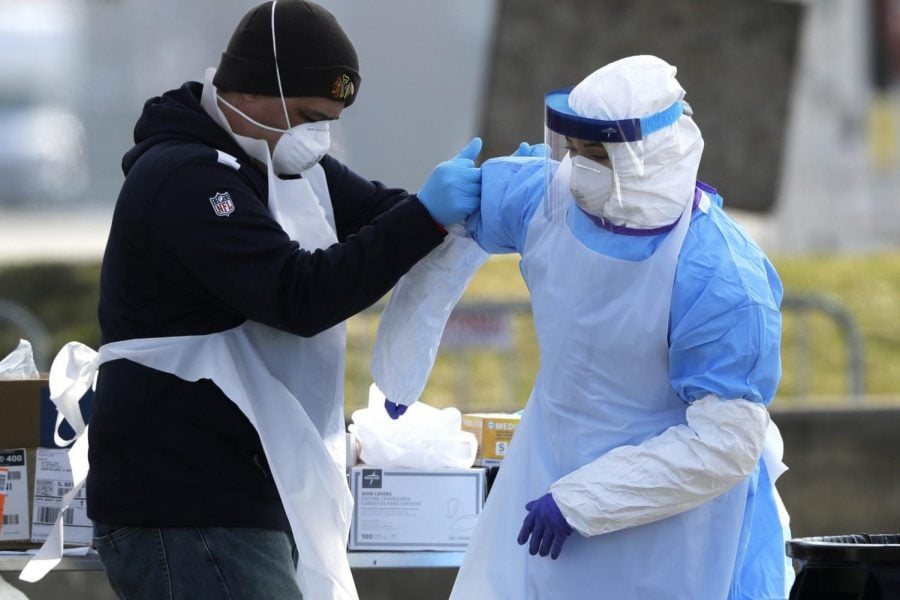 Medical personnel help each other at a federal COVID-19 drive-thru testing site in the parking lot of Walmart in North Lake, Ill., Wednesday, March 25, 2020. The new coronavirus cause mild or moderate symptoms for most people, but for some, especially older adults and people with existing health problems, it can cause more severe illness or death.

SPRINGFIELD, Ill. (AP) — Hundreds of health care facilities in Illinois that largely serve low-income and minority communities are facing financial chaos because they’ve canceled most routine doctor visits in an attempt to stymie the coronavirus pandemic, according to an industry organization’s report.

The internal financial review completed Wednesday for the Illinois Primary Health Care Association found that, without help, the state’s federally established community health centers face losses of $181 million and 4,350 layoffs during the next three months.

Meanwhile Thursday morning, Chicago officials ordered the city’s lakefront trails and nearby parks shut down, hours after Mayor Lori Lightfoot threatened to close the popular spaces if people would not stop crowding the areas.

There are 51 community health centers operating 390 Illinois facilities. According to the review, nearly 40 percent of the centers, required to provide care regardless of ability to pay and often serving low-income regions, would have to close their doors.

Jordan Powell, the organization’s president and CEO, said if the facilities had sufficient personal protective equipment such as masks and gloves — in urgent demand nationwide — they could be key COVID-19 testing sites.

Heartland Health Centers, with 18 sites in the Chicago area along with temporarily closed public school clinics, reduced staff hours by 40% this week, president and CEO Gwenn Rausch said. Most of its 210 employees will work just three days a week to save $400,000 of a $1.2 million monthly payroll.

“Instead of seeing 500 patients a day, to minimize the number of well people coming into health centers who didn’t need to be there, and doing telehealth, we’re reduced to only about 100 patients a day,” Rausch said.

On Thursday, Gov. J.B. Pritzker’s administration announced that seven more Illinois residents had died from COVID-19, bringing total deaths to 26. Coronavirus infections in Illinois rose by 673, a 36% increase from a day earlier, to a total of 2,538.

Also Thursday, President Donald Trump’s Federal Emergency Management Agency approved a major disaster declaration for Illinois because of the pandemic. It frees federal funding for crisis counseling and partial reimbursement to local governments and some nonprofit agencies for the cost of community protective measures.

For most people, the new coronavirus causes mild or moderate symptoms, such as fever and cough that clear up in two to three weeks. For some, especially older adults and people with existing health problems, it can cause more severe illness, including pneumonia, or death. It’s claimed 19 lives in Illinois among 1,865 people infected.

Advocates hoped that a proposed $2 trillion stimulus package negotiated by the White House and Senate leaders and awaiting congressional action would include $3.2 billion for community health centers. But it provides less, $1.32 billion, Powell said.

“This isn’t a temporary problem …,” Powell said. “This pandemic will only increase the number of unemployed and uninsured in communities served by health centers. When this crisis is over, community health centers … will be in greater demand.”

An earlier package signed March 6 provided $100 million for the centers, but that spreads thin nationally and its distribution was just announced Wednesday, with $3.6 million set aside for Illinois.

Dr. Deborah Birx, the White House coordinator for coronavirus response, expressed concern about the rapid increase of COVID-19 cases in Cook County, noting it could become a hotspot of the virus’ spread.

“So we have integrated all of our information to not only look at where the cases are today, but how they’re moving so we can alert FEMA to where we think the next potential hotspot is,” she said. “All of the counties that I mentioned in the hotspots are in urban areas or in the communities that serve that urban area.”

The city also closed a popular paved trail on the North Side and pathways along the Chicago River downtown.

People who violate the closures will get a warning from police. If they continue to violate it, police can issue citations and make arrests, Police Superintendent Charlie Beck said.

People can still take walks in their neighborhood but must remain away from others, officials said.

Lightfoot said modeling suggests that 40,000 people in Chicago could need treatment at hospitals for cases of COVID-19, a number that will “break the back of our healthcare system.”

Emphasizing the importance of limiting the virus’ spread and minimizing demand on healthcare providers, the head of the Chicago’s Department of Public Health said city, state and Army Corps of Engineers officials toured the sprawling McCormick Place Convention Center on the lakefront to plan for “thousands” of beds that could be needed for patients.

“It is part of our pandemic planning but it is not something I have ever wanted to seriously consider doing in Chicago,” Dr. Allison Arwady said. “But we’re talking about it, not in theoretical ways.”

Lightfoot said detailed plans for the convention center had not been finalized.