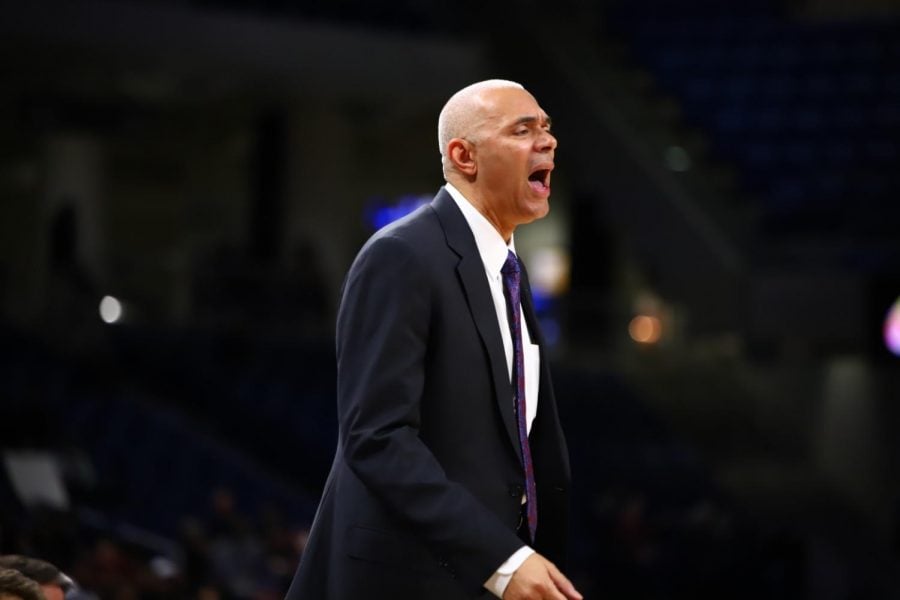 DePaul head coach Dave Leitao yells at his team during their game against Buffalo on Dec. 8,

DePaul University and men’s basketball head coach Dave Leitao have mutually agreed to a contract extension on Thursday, per release. The contract extension will keep Leitao at the program’s helm through the end of the 2023-24 season.

A source told The DePaulia that Leitao’s new contract features no buyout and there is no guaranteed money beyond next season.

Leitao — the university’s highest paid employee, making more than $1 million each year — fell well short of expectations to turn the program around under the contract he signed in 2015. Over the last five years, Leitao’s Blue Demons finished last in the Big East four times, and has yet to notch a winning record through the end of the regular season despite winning 12 of their first 13 games this past season.

“We are happy to reach an agreement to continue the improvement and stability that Coach Leitao has instilled in our men’s basketball program,” Athletic Director Jean Lenti Ponsetto said in a statement. “His vision of academic excellence, athletic excellence and community service mirrors DePaul’s mission in developing outstanding student-athletes and future leaders in our society.”

After an NCAA ruling this past summer, Leitao’s program will face three years of probation for a recruiting violation, for which he also served a three-game suspension. When he returned to the sideline, the Blue Demons popped into the national spotlight with signature road wins over Iowa and Minnesota, and a stunning home victory over Texas Tech. With the Blue Demons in position to return to the NCAA Tournament for the first time in almost two decades, a 3-15 conference record spoiled their chances.

DePaul’s season ended with a win in the opening round of the Big East Tournament over Xavier, and were slated to play No. 11 Villanova in the quarterfinals before the event was cancelled due to concerns of COVID-19.

“I appreciate DePaul athletics director Jean Lenti Ponsetto for her continued support,” Leitao said in a statement. “The process of laying the foundation for sustained success evolved into a strong start to this season before a tough run through the conference schedule. I’m proud of the resilience of our players and staff to finish the season strong before all of our lives were interrupted with the coronavirus outbreak. The response we received from our fans and supporters all season was outstanding and we can’t wait to continue to build excitement at Wintrust Arena in the future.”

Leitao previously coached DePaul from 2002-05 and led the program to their last NCAA Tournament appearance in 2004. After the 2004-05 season, Leitao left to be the head coach at Virginia. After serving four years, the New Bedford, Massachusetts native spent the 2011-12 season as the head coach of the Maine Red Claws in the G-League. Leitao then spent two years as an assistant coach at Missouri before taking the same job at Tulsa for the 2014-15 season.

Leitao’s first three years back at DePaul saw a total of nine Big East wins before winning seven in the 2018-19 season when the Blue Demons finished with a 19-17 record. This was DePaul’s first winning season in a decade, made possible by a run to the championship series of the College Basketball Invitation.

In the 2019-20 season, the Blue Demons went 16-16 and 3-15 in the Big East. Wins over Minnesota, Iowa and Texas Tech bolstered a successful non-conference schedule, which saw the Blue Demons rise up to No. 27 in the AP poll in late December. The start of Big East play, however, saw DePaul lose its first four conference games before defeating No. 5 Butler on Jan. 18 to improve to 1-4.

The Blue Demons would then go on to lose their next eight games before finishing the regular-season at 2-3, but Leitao and his team still went into the Big East Tournament at Madison Square Garden as the 10th seed facing No. 7 Xavier. DePaul, however, was able to knock off the Musketeers 71-67 in the first round on March 11, and was slated to face Villanova the next night until the coronavirus put an end to all NCAA activities.

Leitao’s second tenure has also seen the program get in trouble with the NCAA. Last summer, the NCAA concluded that a former DePaul associate head coach violated the rules when he directed the former assistant director basketball of operations to provide impermissible recruiting benefits to a recruit. As a result, the NCAA suspended Leitao for the first three games of the 2019-20 season for failing to promote an atmosphere of compliance. The Blue Demons’ men’s basketball program was also placed on probation for three years.

After Leitao got suspended and the program was placed on probation, the school announced in September that they were working on a contract extension. But sources told The DePaulia that release was initially for recruiting purposes because Leitao’s last contract was expiring after the 2019-20 season, and recruits were asking the status of his contract.

With the contract extension now official, Leitao will be the Blue Demons’ head coach for the next four years. For the 2020-21 season, DePaul only has one official recruit in Kobe Elvis. But for the 2021-22 season, the Blue Demons currently have the No. 4 recruiting class with two four-star verbal commits in Ahamad Bynum and Keon Edwards.