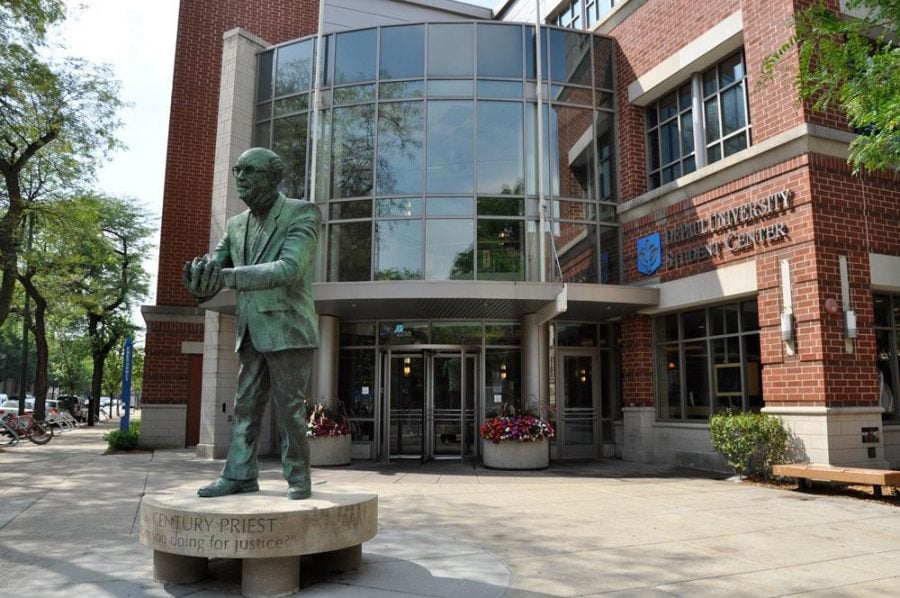 Administrators at some major Illinois universities can expect their phone lines to be busy Friday.

In an effort to support those who have lost work during the COVID-19 pandemic, subcontracted workers and their allies are being encouraged to call the offices of university provosts and presidents at DePaul, Dominican, Northwestern and Loyola University to ask that subcontracted workers — particularly those in food services — continue to have their financial and health care needs met.

The call-in is organized by UNITE HERE Local 1, the Chicago and Northwest Indiana branch of a labor union representing more than 300,000 workers across industries, according to its website. A spokesperson told The DePaulia that they hope the university follows the lead of universities like Harvard, MIT and Pomona College, which have all pledged to ensure subcontracted workers are paid throughout the remainder of the COVID-19 crisis. Those three schools — as well as Georgetown, which also made the same commitment — all have endowments more than three times larger than DePaul.

Since DePaul shuttered campus buildings over the last two weeks, the university’s campus dining services will cease operations for the remainder of the school year. This will leave many familiar faces to DePaul students out of work, as Chartwells, the dining service contracted by DePaul, suspends its service to the university.

“UNITE HERE Local 1 is urging DePaul to work with Chartwells/Compass Group — the worker’s direct employer — to ensure that lost wages for dining and service workers’ on their campus are made up in this time of crisis,” a spokesperson told The DePaulia. “While many workers will be helped by the federal stimulus package, many are not eligible for a variety of reasons, and those who are cannot wait the weeks or maybe months it will take for them to get financial assistance from the government.” 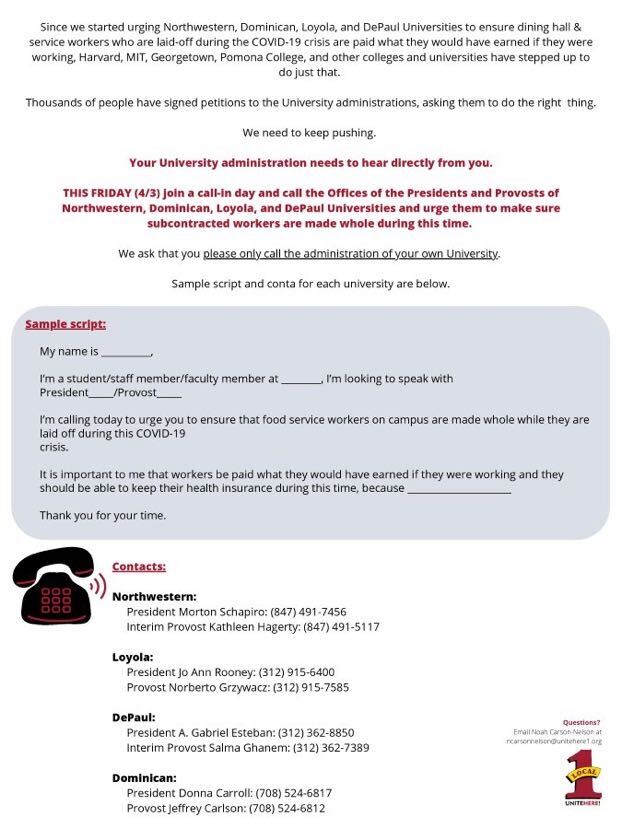 Administrators may also expect to hear from DePaul students like Kelly Garcia who, while not laid off herself, feels compelled to fight for the people in the DePaul community who have been laid off.

“I’m taking part in the call because as a student who has attended DePaul for four years, I know very well how much time and effort the dining hall and service workers put into making sure that this university could properly function for all its students,” Garcia said. “Chartwells workers have consistently gone above and beyond to serve students and as members of our community, I feel it is important we advocate for them.”

UNITE HERE Local 1 is also joining the Catholic Labor Network in appealing to the Catholic missions of schools like DePaul and Loyola. DePaul is one of just a few Vincentian Catholic universities where serving the less fortunate is a closely held value.

In a letter to DePaul President A. Gabriel Esteban, the Catholic Labor Network encouraged the university’s first lay president to serve that mission.

“As Catholics, we believe that we will be judged on whether we had fed, clothed and sheltered ‘one of these least brothers of mine’ (Matthew 25:30-46),” Catholic Labor Network Executive Director Clayton Sinyai wrote in the letter.

Garcia said she was shocked to see how unprepared DePaul was for a global crisis, and put the onus on the school to step up and help those pushed out as a result.

“As an institution that prides itself in being mission-driven, I find it hard to believe that there is no solution to making sure that all sub-contracted workers receive paid leave,” she said. “It’s shocking to me that DePaul (and other universities) seem to be in such a crisis when they should have had a plan in place for when a global crisis like this would occur.”

And while she admits that she is not familiar with the specifics of DePaul’s finances, she said she does know “that if those workers were going to be paid in normal circumstances, then they should be getting paid now.”