India prepares for worst of COVID-19 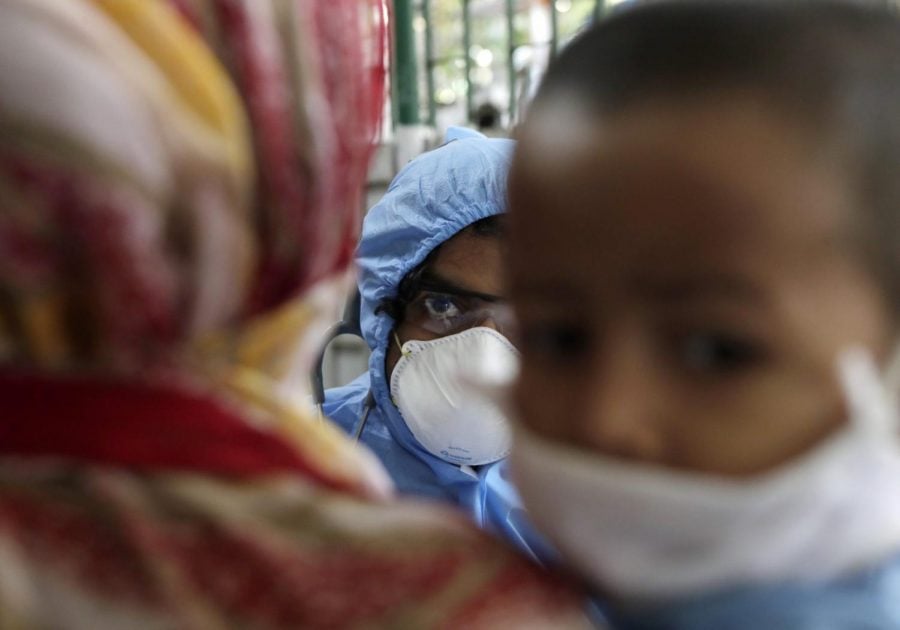 A doctor engages with people at a slum area during lockdown to control the spread of the new coronavirus in Mumbai, India, Tuesday, April 7, 2020. . The new coronavirus causes mild or moderate symptoms for most people, but for some, especially older adults and people with existing health problems, it can cause more severe illness or death.

The global fight in India continues to rise against COVID-19 as fire brigades use powerful hoses to sanitise streets and sidewalks, hurried locals rushing to assist in the relocation and moving of medical beds and supplies,  however, the fear still lingers that the situation might worsen even more.

According to the most recent reporting of COVID-19 cases in India, 4,281 cases have been confirmed positive, 111 have been declared dead and 319 have recovered. According to the dissected statistics, the highest number of deaths are seen in major cities such as Tamil Nadu, Maharashtra and Telangana, where the numbers have surged between 500 and over 700. Doctors worry that as a result of an explosion of cases, it could greatly impact their hospitals on a much greater scale than what is being seen in Italy and the United States.

“India is a hugely populous country. The future of this pandemic will be determined by what happens to densely-populated countries. It’s important that India takes aggressive action at the public health level, and at the level of society to control, and suppress this disease,” said WHO Emergencies programme director Mike Ryan, in his address at the headquarters in Geneva, Switzerland on March 23.

Doctors all over India have been working tirelessly by creating their own homemade hazmat suits with hospitals making their own hand sanitizers to continue avoiding the risk of low supplies, during a time where the more supplies that are given, the faster doctors can accomodate to the treatments of all patients.

Prior to the large surge in cases, a relatively low number of cases were first reported in India with 633 diagnosed cases and 16 deaths out of a 1.3 billion population in India, according to NPR. However, despite the low numbers, Prime Minister Narendra Modi issued the world’s largest lockdown and also made a $2 billion investment to further help the public health systems of India. But doctors are still worried that even such quick implementations of security and financial aid may not be enough to control the cases.

“Personal protective equipment is in short supply, and what’s available is over 10 times the usual cost. So we have innovated. About 7,000 masks have been stitched by our volunteers,” said Dr. John Victor Peter, director of the Christian Medical College Vellore for an NPR report.

Along with strict and urgent measures that medical officials on the frontlines are taking to decrease the number of cases, certain areas in India also have waves of fear coursing through towns as police officers beat locals who step out of their homes, according to an interview with Rukhsana Ghani, who was born in Hyderabad before moving to Saudi Arabia and then migrating to the United States.

“One person is allowed to leave per household for necessities. Many are homeless because workers who came from the villages are stuck in Delhi after everything shut down, so they don’t have public transportation to return to their homes,” said Ghani. “As a result, many of them have been forced to walk back to their villages. They don’t have money [or any source of income] so their situation is really bad.”

Villagers in India have been facing great struggles during this time due to lack of resources such as basic masks to wear, hand sanitizers, clinics for testing, food, clean water and more importantly, proper shelter needed to practice social distancing. Citizens who live on the streets are far more in danger due to the lack of shelter that has been designated specifically for their safety. According to the government of India, there is a doctor per 1,500 citizens while the WHO recommends having a doctor per 1,000 citizens. Additionally, in rural areas, there is one doctor to more than 10,000 citizens. To further compare the number of resources per group of citizens in India, there are 2.3 intensive care beds per 100,000 citizens, however, in China there are 3.6 beds per 100,000 people and and in the United States, there are 35 per 100,000 people.

“One thing I can speak to I guess is the lack of trust in authority and a sincere governmental response to the crisis among so many minority communities. My family speaks disparagingly about Modi’s hasty response. For whatever reasons, people will hesitate to heed necessary measures. This lack of trust, coupled with the density of poor, urban areas, will be devastating,” said Mehdi Baqri, a junior at Yale University.

COVID-19 tests and ventilators are also low in stock, however, the government has not reported exact numbers of ventilators. According to experts, there is an estimate between 30,000 and 40,000 ventilators nationwide. However, organizations and citizens are still doing their part to flatten the curve by working from home. Reliance Jio has now decided to offer basic Jio Fibre broadband services to all new customers and has doubled the services for existing customers. Reliance Industries has also set up the first hospital dedicated to treating COVID-19 patients in Mumbai and has advocated to provide more testing kits and enhance production to produce 100,000 face masks everyday.

“This is a wake up call for the government to improve access to healthcare,” said Shailja Sharma, a professor of International Studies and Refugee and Forced Migration Studies at DePaul University.

Despite the numerous efforts that are being taken by several organizations across the nation of India, the core solution still remains the same even for countries overseas; washing your hands for 20 seconds, keeping a six foot distance, avoiding large gatherings of people and practicing social distancing as much as you can. During this global battle, it is imperative that the community and the government work together to make sure that everlasting change is established to not only flatten the curve, but to also change the course of public health in India.