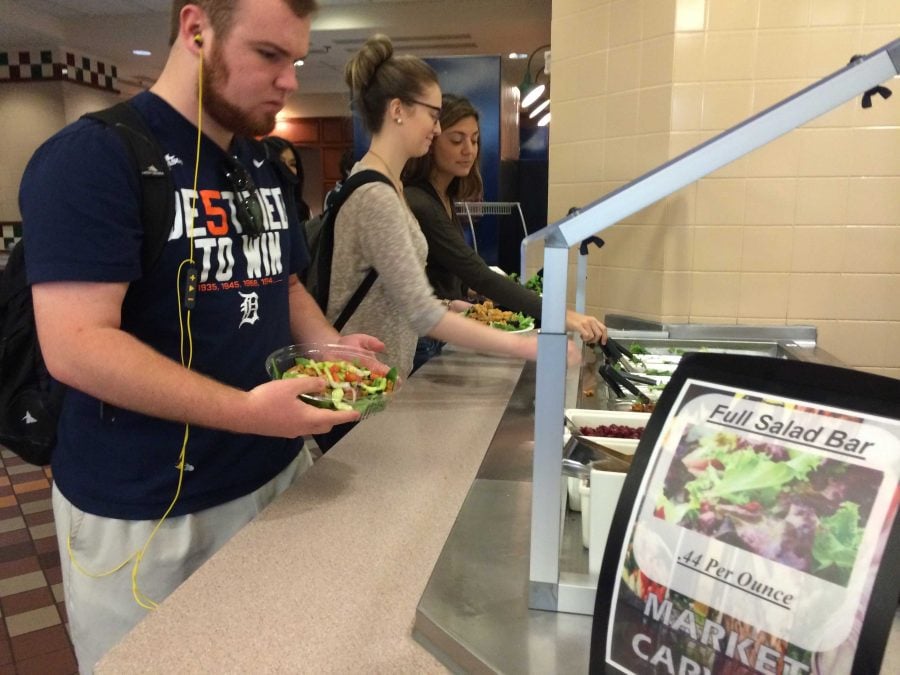 DePaul students get food in the dining area at the DePaul Center in the Loop.

A few weeks ago, Yasmin Vinalay was a cook in the Lincoln Park Student Center, her ninth year working for Chartwells — the dining service contracted by DePaul. She and hundreds of others like her on college campuses across the city were suddenly out of work. As bills become due with four kids to feed, she and her coworkers are still hoping for some type of payment from DePaul.

“I served these students for nine years,” Vinalay said. “I think I deserve better.”

As all operations quickly came to a halt on campus late last month, Chartwells dining service employees were given little communication and little notice before being laid off.

According to Vinalay, Chartwells employees were going day-by-day at the end of March, peppering their supervisor with questions about their uncertain future. As Vinalay and others anticipated a list of essential employees who were to remain at work on campus through April, they were instead told they had been laid off completely, she said.

“I was in shock because I was expecting to work the next week,” she said. “It really affected everyone.”

Vinalay is one of about 90 employees of Chartwells or Compass, their parent company, that is part of the union Unite Here Local 1 which represents 16,000 hospitality workers in Chicago and Northwest Indiana, including those subcontracted to universities like DePaul, Loyola, Northwestern and Dominican.

Now, the union is calling on DePaul to ensure the payment of lost wages for all food service workers.

“Folks are struggling financially because this is kind of an overnight loss of income,” said Noah Carson-Nelson, the union spokesperson. “A lot of folks that I’m talking to don’t know how they’re

going to be paying rent this month and feed their families and keep up with other bills.”

Unite Here Local 1 hosted a virtual rally on Facebook, scheduled for 3:30 p.m. April 7 where “workers and students will urge Loyola, DePaul, and Dominican to work with their subcontracted food service provider — to ensure workers are paid their lost wages,” according to a press release.

So far, neither Vinalay, her coworkers nor the union have received any communication from Chartwells or DePaul.

A statewide call-in organized by Unite Here Local 1 on Friday aimed to encourage administrators at Chicago-area universities to pay subcontracted workers, but some students who called to advocate for Chartwells employees say they did not have their calls answered or returned over the weekend.

DePaul student Kelly Garcia told The DePaulia that she called once an hour for most of the day and was only able to leave a voicemail. She said she heard from 10 others who had the same experience.

University spokesperson Carol Hughes referred all inquiries regarding paying dining hall employees directly to Chartwells. Chartwells has been unable to be reached for comment despite multiple attempts.

Despite the fact that payment requires cooperation between both Chartwells and DePaul, Carson-Nelson said, “At the end of the day, the university has the power to do what’s right and work with that subcontractor to make it happen.”