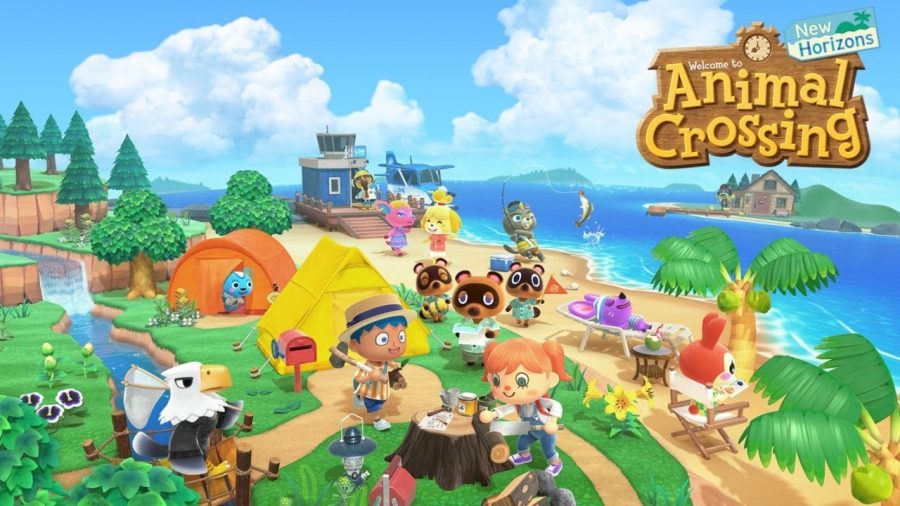 Imagine escaping to an island filled with cute anthropomorphic animals, tasked with doing as much or as little as desired, while relaxing acoustic and cheery bosa nova music plays in the background. Amid the wake of a pandemic, Animal Crossing’s conveniently timed release provides comfort and social connection for players in a time of physical isolation. During a time of social isolation, people are turning to video games to “hang out” with friends and are using Animal Crossing New Horizons to do it.

In Animal Crossing, players are tasked with building a community for its residents. The user gets to customize their town by adding shops, homes and other accommodations. Unlike competitive video games, players can follow their own pace and accomplish easily attainable goals. Additionally, its childlike aesthetics contribute to the games relaxing atmosphere, which is particularly captivating during the stresses of quarantine.

Players can also “hang out” with friends by visiting each other’s islands and are able to replicate social activities, like going outside, that they currently are unable to do in real life. Colton Bell is a chapter coordinator at Tespa, the world’s largest operator of collegiate esports leagues. Colleagues describe Bell as a social butterfly who thrives on community engagement, and he picked up Animal Crossing during quarantine to escape the blunders of social distancing.

“My partner and I had a ‘date’ on the island where we laid out on the beach and listened to waves… it gave us some laughs and reprieve from all of the social distancing,” Bell told The DePaulia.

Like many users, Bell uses the game to do things he’s currently unable to do amid the pandemic. “There are so many cute things to do that it actually gives you some opportunities to feel like you’re doing something more than just playing a video game.”

Animal Crossing not only appeals to gaming aficionados like Bell, but novice players are also taking part in the phenomena. DePaul senior Ashtyn Farrell says, “I’ve had it now for about three weeks and I use it every day.” While Farrell uses the game to pass time, she also says, “it’s a way to connect. You can chat and send gifts which makes it very personal and fun amidst the whole crisis.”

The DePaul community even utilizes the game as a unique way to stay connected away from campus. The DePaul Esports team is creating custom DePaul images, like a DIBS flag, that users will be able to upload to the game to promote school spirit. DePaul senior, Halle Wagner says, “You can send QR codes of designs to people so you can get that design in your game. It’s another engaging aspect of the game.”

All types of people are turning to video games and esports to occupy themselves during an era of isolation. DePaul senior, John Cotter, is a gaming veteran who had long term plans to purchase the new release.

“I’m definitely using it more now than I normally would have because I have the time, and I’m spending more time playing games in general,” Cotter says.

There is a surge in interest around video games as people around the world are quarantining. According to Europe, Middle East, Africa, Asia and Australia market data, New Horizons sales totaled more than all other Animal Crossing releases combined. In addition to record breaking sales, there is a sharp increase in Twitch viewership, a streaming site for gamers, and a rise in the popular gaming software, Steam, as people turn to gaming platforms as alternative social activities.

New Horizons is a prime example of how social video games can be. “Growing up I learned that video games made you a recluse. I finally realized that I had just been taught the wrong way to think about video games,” Bell said. New Horizons is more than a whimsical time wasting game, it’s a way for people to stay connected with each other when they physically can’t.

At a time when there is no end in sight to the current crisis, New Horizons bestows a sense of calmness. It gives players total control over the progression of the game when they have little control over the progression of their own lives. Cotter emulates the relation between New Horizons to the anxieties let on by the Coronavirus, “The game is especially comforting because it feels like an escape from reality.”