5 years after hiring Dave Leitao, DePaul still stuck in the bottom of the Big East 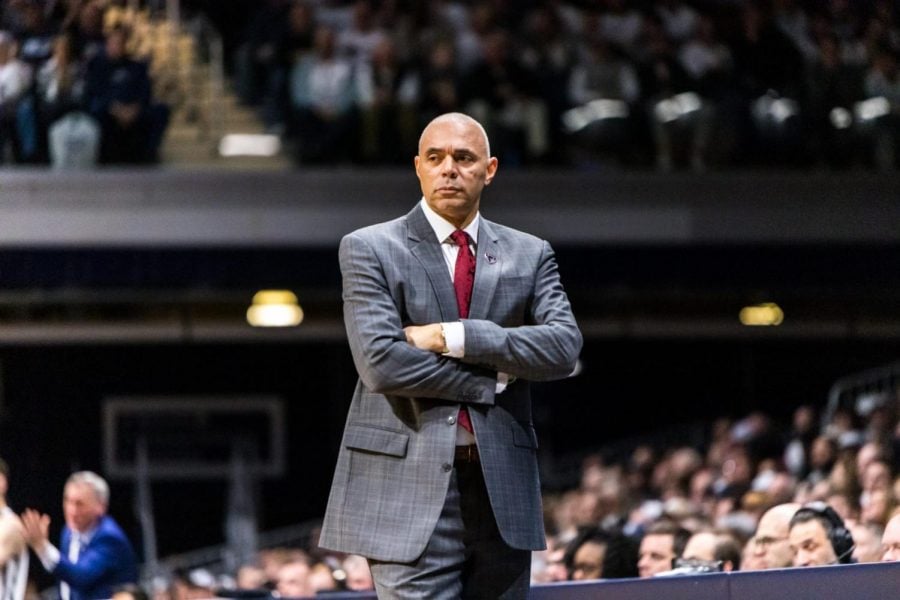 For the past 15 years, DePaul men’s basketball has been stuck in a state of perpetual losing, with no clear end in sight. But after the program achieved a 19-17 record — the Blue Demons’ first winning season since the 2006-07 season — in 2018-19, there was hope DePaul would build on that heading into a crucial 2019-20 season.

With a top-35 recruiting class and junior transfer Charlie Moore making their way to Lincoln Park, head coach Dave Leitao finally had the necessary talent to compete against the country’s best teams. And the early signs during the non-conference portion of DePaul’s schedule pointed to a different team — one that was ready to climb out of the dark and emerge into the light.

A 12-1 start, including wins over Texas Tech, Iowa and Minnesota, had the Blue Demons on the verge of the Associated Press’ top-25 poll for the first time in 19 years. More importantly, DePaul built an impressive non-conference resume for an at-large bid for the NCAA Tournament come Selection Sunday in March.

A poor showing in Big East play, however, put the Blue Demons back into last place with a 3-15 record, and the hopes of making the NCAA Tournament vanished. Even though Leitao has now finished last in the conference four out of the last five years, athletics director Jean Lenti Ponsetto decided to give Leitao a four-year contract extension on April 2.

Now, a month removed from the Blue Demons’ season ending before they got the chance to face Villanova in the Big East Tournament quarterfinals, The DePaulia talked to Lenti Ponsetto and Leitao regarding the state of the men’s basketball program.

“Obviously, there’s a bottom line and I think the outside world understands in this business that winning is a caveat to the determination of success,” Leitao said. “But at the same point in time, and I think [Lenti Ponsetto] will concur with the thought process, when we came here [in 2015], it was about building. And I said that day one during my first conference that we are going to take a little bit of time because, if you go back 10 years, a lot has happened. So, to create something that was going to be worth it, worthwhile and long lasting was going to take a little bit of time.”

When Lenti Ponsetto hired Leitao back in 2015, she talked about this not being a rebuilding process but the goal was to, in her words, “win now.” In five years, however, Leitao has compiled an overall 64-98 record and a 19-71 Big East record, including no trips to the NCAA Tournament and four straight last place finishes in the conference.

“Well, I think the comment about winning now was we were putting in place an infrastructure for us to build on,” Lenti Ponsetto said. “My comment, at the time, was to get some good student-athletes in the program. Coach Leitao was laying the groundwork with the staff he was building. We had some potentially good prospects coming that were yet to be evaluated, but based on their high school results, I think we thought they were going to be contributing factors. So, based on the information we had at the time, I think the expectation is always when you are transitioning, your goal is going to be to win. It’s probably unrealistic on the receiving end. And I didn’t mean we were going to win the next day or win right away, but that we would do our best to build the program.”

One aspect of building a program is bringing stability and recruiting players that will allow DePaul to constantly compete with the best teams around the nation and inside the Big East. But, like the 2019-20 season showed, the Blue Demons are still not in a place where they can challenge the best teams in the conference for the entire 18-game schedule.

Lenti Ponsetto points to the “academic excellence” that the men’s program has achieved under Leitao in five years, but in 2019, the men’s basketball team had the lowest Academic Progress Rate of any program at the school, 959, 20 points lower than the men’s track and field team.

“I think from a basketball perspective, [Leitao] has continued to recruit student-athletes that have elevated our play,” Lenti Ponsetto said. “I think we have become more competitive in the Big East than we had been prior to the time that he was here.”

While DePaul was able to achieve seven Big East wins a year ago, that number fell to only three wins this past season in a more competitive conference. Even though there was no NCAA Tournament in 2020, the Big East was projected to have six or seven teams make the tournament.

The Blue Demons’ struggled this season to hit free throws and 3-pointers, while also having the second worst 3-point defense in the Big East. Even though DePaul had the 56th best defense in the nation, they only had the 165th best offensive efficiency ranking, according to KenPom.

“When we hit Big East play, I think most specifically in some of the things we are trying to address now, is that versus the other nine teams in the league that our ability on the perimeter to make more plays,” Leitao said. “We look at our statistics, we probably didn’t take as many 3-pointers or make as many 3-pointers as our league opponents. We weren’t as productive from the free-throw line for the amount of close games we had, I think that was a very significant part of it.”

While Leitao points to specific issues the team had during conference play as a reason they couldn’t sustain the success from earlier in the season, Lenti Ponsetto keeps pointing to the lack of resources Leitao and his staff still don’t have compared to other Big East schools. Even though DePaul was able to move from Allstate Arena to Wintrust Arena in 2017, which is supposed to give the men’s program a boost in terms of recruiting, Lenti Ponsetto still wants to see improvements with facilities in Lincoln Park.

“From my perspective, what I have the vantage point of is knowing what everyone else in the Big East has and what DePaul has,” Lenti Ponsetto said. “We continue to do the very best that we can with the resources we have been given. We are very fortunate that we have a beautiful facility in Wintrust Arena that we are very fortunate going into our fourth year. But there’s other areas of the program where we are not similarly resourced to other programs in the Big East that we’ve got to continue to get better at to help our coaches and student-athletes be successful.”

Recruiting has seen a slight uptick in the last couple of years under Leitao, with Romeo Weems and Markese Jacobs headlining the No. 34 class in 2019. But the Blue Demons only have one recruit so far for 2020 in Kobe Elvis, while four players have already announced they are transferring — Devin Gage, Flynn Cameron, Mick Sullivan and Sullivan Menard — while junior forward Paul Reed has declared for the 2020 NBA Draft.

With the coronavirus outbreak, however, everyone in the country has had to shift how they recruit players. For Leitao and his staff, which he expects to be fully intact heading into next season, this is a time when they would be finding transfers to fill roster spots.

“So, because we are in this situation where everything is being done over zoom, the phone and facetime there’s a lot of missing pieces,” Leitao said. For us, we spend a lot of time, not just myself and our staff, but [Lenti Ponsetto] and the rest of the university to get to know families. So, it’s been a challenge, but I don’t know if it’s an even greater challenge than anybody else across the country has faced.”

The players that were coming back coupled with the players coming in for the 2019-20 season had fans excited about the Blue Demons’ chances last season. But the story is different for the upcoming season. Not only is DePaul losing key pieces from last year’s roster, but they have yet to add any transfers.

“I’m not even cautiously optimistic, I would say I will be cautiously pessimistic,” Joe Breslin said of the 2020-21 season. “You just know what you are going to get with [Leitao], and it’s not good. There’s nothing this year to bring in you, like there was last year. We will see what will happen in the transfer market to see if we can get someone exciting, but Leitao being renewed, I’m just not excited about the season and future of DePaul basketball.”