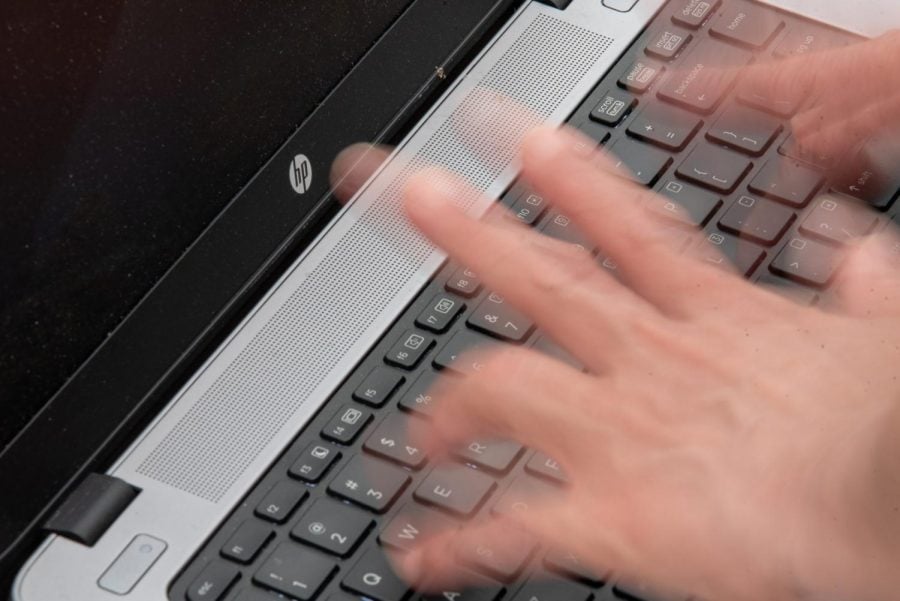 COVID-19 has thrown everything and everyone for a loop. In the span of a few months, the virus has completely changed how we live our lives.

Universities across the world have been forced to switch to an online-only model with professors using video software, such as Zoom, to hold classes. While it offers a way for classes to resume as “normal,” it still leaves professors and students at a disadvantage.

Navigating D2L can be cumbersome depending on the number of classes a student signs up for and if they are holding lessons through Zoom.

“I think the biggest challenge is using D2L for so many classes,” said DePaul senior Matt Beach. “Each class feels organized in a different way which makes it challenging to find everything at first since you have to get used to all of the different layouts.”

Online learning also provides challenges when it comes to motivation. With everyone required to stay at home and days blending into one another, paying attention during a Zoom meeting becomes difficult with distractions everywhere.

“I won’t lie, I’ve definitely missed a few deadlines just because each of my four classes are organized on D2L in completely different fashions,” Beach said. “This has led to certain assignments falling completely under the radar for me.”

I’m taking two classes but only one holds Zoom meetings. Yet, I also found myself struggling with the technology, not knowing which link directed me to the proper meeting place. It can undoubtedly prove a confusing task for someone taking four classes.

Everyone learns differently, and remote learning forces students to teach themselves more of the course material. With no physical setting, any questions or issues can easily be discussed with a professor during or after class as well as during office hours.

With Zoom, raising your hand isn’t as effective because there are a number of students there and the professor can’t have his or her eye on everyone as they could in a classroom. It can also lead to people talking over each other which can discourage someone from speaking up if they think they aren’t going to be heard.

An earlier article featured in The DePaulia stated, “DePaul only offers five online bachelor’s degrees and 20 master’s degrees. Many of those involve data, computers and technology, according to the DePaul website.”

Classes that can, in theory, be taught online, present drawbacks simply because of the way students learn.

“I am teaching three sections of LSP 120 – Quantitative Reasoning and Tech Literacy, which has been taught online in the past,”  said Joanna Deszcz, a Quantitative Reasoning instructor at DePaul. “All the materials were already prepared prior to DePaul moving to remote learning. The class is conducive to online learning but most students prefer to take it in person as it is heavily math and computer skills-based.”

Being on a phone or a laptop has long been a nuisance to professors and impacted how focused a student is. But now we’re being asked to rely on it more than ever to learn.

“One of the big challenges is just the amount of screen time,” said Rob Adler, an acting professor for the DePaul Theatre School. “If you’re in three two-hour classes in a day, as many of my students are, to be in a synchronous class for six solid hours looking at a screen, it’s not healthy.”

He’s had to alter the way he teaches to keep his students engaged and to ensure that they aren’t staring at a screen all day. Other professors, not used to teaching online may take a different approach.

An article in the Hechinger Report stated, “Students at brick-and-mortar colleges say many of their instructors, flummoxed by the abrupt change, have simply sent their classes reading materials or videos, with no interaction at all.”

The digital divide is still something that affects a large number of people despite the Internet and computers becoming a necessity.

A study at Indiana University found that “some students are less likely than others to have consistent access to reliable technology.”

Libraries, who can provide both equipment and Internet access, are leaving few, if any, viable options. The study found that students with less than reliable laptops also had a lower grade point average.

Learning online can have its advantages, but there’s a reason why the traditional classroom setting is still the way to go. People need that interaction with one another and with the professor to stay focused and motivated. As a short-term fix, online learning works but not without its hiccups.

The irony in all this is for so long we’ve been told to pull ourselves away from our screens. To deal with the real world. Now we have to depend on it in nearly every facet of our lives. Some will adjust better than others. People need a separation between life, work and school. With the switch to online learning, we lose that, resulting in consequences that stretch far beyond the classroom.