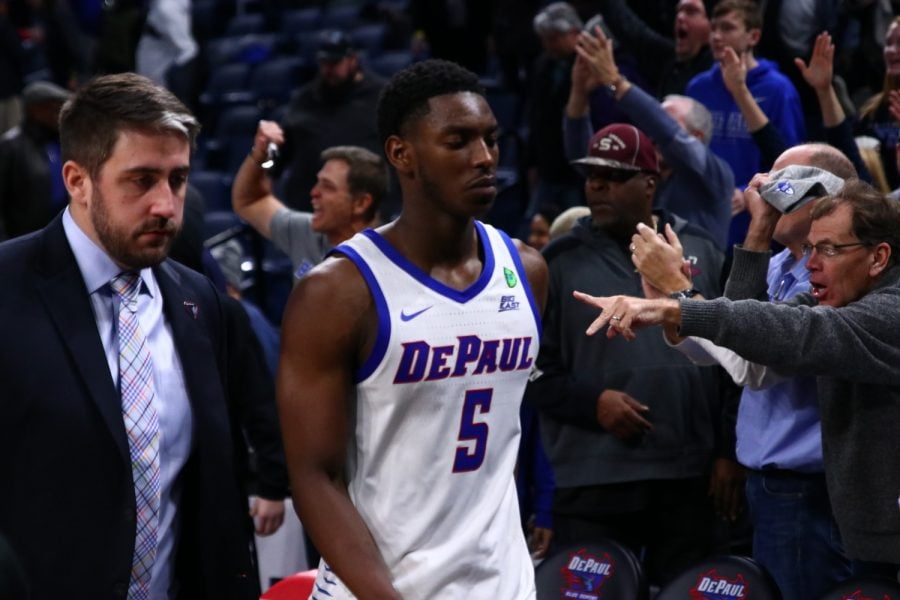 DePaul senior guard Jalen Coleman-Lands walks off the court after a 74-69 loss to Buffalo on Dec. 8 at Wintrust Arena.

In 41 games at DePaul, Coleman-Lands averaged 10.8 points per game per game with 77 3-pointer games. Coleman-Lands was expected to be a starter for the Blue Demons and a vital piece for head coach Dave Leitao, who recently signed a four-year contract extension.

Coleman-Lands began his college career at Illinois in 2015, spending two seasons with the Fighting Illini before transferring to DePaul in 2017. After sitting out the 2017-18 season due to NCAA transfer rules, the Indianapolis, Ind. native made his DePaul debut during the 2018-19 season.

His first season, however, with the Blue Demons was short lived as a broken left ended Coleman-Lands’ season after nine games. As a result, the 6-foot-4-inch guard played in less than 30 percent of the Blue Demons’ games during the 2018-19 season — which allowed the NCAA to grant Coleman-Lands a medical hardship waiver for the 2020-21 season.

During the 2019-2020 season, Coleman-Lands started in all 32 games and averaged 11.1 points per game and led the team with 63 3-pointers. But Coleman-Lands’ shining moment of the season came against Texas Tech on Dec. 4. With the Blue Demons trailing 53-50 with 11 seconds to play, Coleman-Lands knocked down a 3-pointer to send the game into overtime.

In the following five minutes, the shooting guard hit another two 3-pointers to give his team a 61-60 lead, with DePaul hanging on for a 65-60 victory. With the win, the Blue Demons improved to 9-0, giving them their best start to a season in three decades.

DePaul went 12-1 in its non-conference schedule, putting them in a good position to earn an at-large bid for the NCAA Tournament. But a 3-15 conference record and another last place finish ended those hopes, as DePaul went into the Big East Tournament as the No. 10 seed. The Blue Demons were able to upset No. 7 Xavier in the first round before the Big East canceled the rest of the tournament due to the coronavirus outbreak.

With Coleman-Lands being the fifth player to transfer and junior forward Paul Reed declaring for the NBA Draft, the Blue Demons now have five open scholarship spots for next season. So far, the only player that is committed for next season is Kobe Elvis.