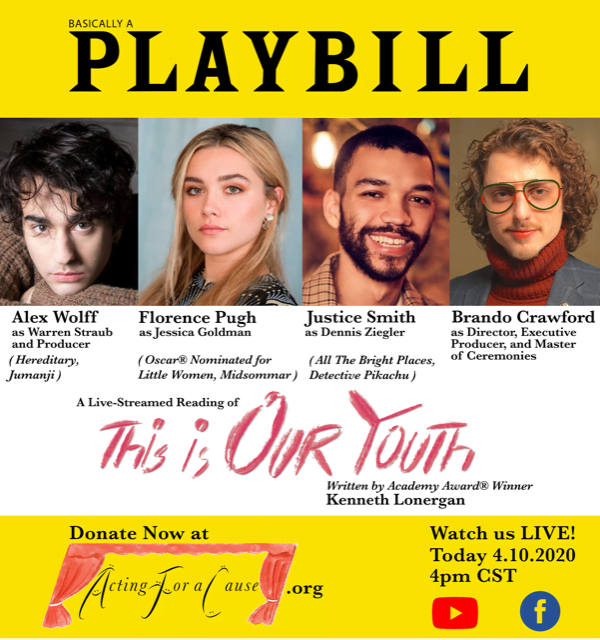 Coronavirus has undoubtedly wreaked havoc on life as we know it, leaving hordes of people jobless and uncertain of the future.

The virus has caused massive blows to the arts community, with musicians canceling or postponing long-awaited releases or tours, summer music festivals are in limbo and theaters are shutting their doors to prevent the spread of the virus.

But amid it all, some creators and producers have taken action into their own hands to keep cultural events alive, while giving back to those in need.

Producer and director Brando Crawford, a native of Western suburb Oak Park, has transformed live theatre into a digital medium, enlisting the help of Hollywood’s hottest young actors along the way.

From the comfort of their living rooms, thousands of viewers were able to tune into live readings of plays “The Importance of Being Earnest” and “This Is Our Youth,” featuring performances from actors Florence Pugh, Alex Wolff and Auli’i Cravalho, among others.

The plays are produced by Acting for a Cause (AFC), a group founded and started by Crawford in high school whose initiative was to raise money for charity.

“We put together the group and we hired a director who was a colleague or a peer of ours in school, and we proceeded to do a six-month rehearsal process for a play, which was a disaster,” Crawford said. “The last week, one of the actors quit because he was mad. It was all drama – teenage drama. But we did raise money for charity… I remember the first show was a thousand something by the third show we raised like three to four thousand [dollars.”]

Crawford said the group initially disbanded because of creative differences amongst each other.

Within the first week Chicago went under quarantine, Crawford sought amongst himself to bring the initiative back and to raise money for families and students in need.

“I was trying to think of a fundraising effort we could do. I thought about our old high school group and I thought how fun it would be to read a play,” Crawford said.

After noticing many actors and performers didn’t have any projects taking place during this time, Crawford said he took it upon himself to contact every publicist of every actor he liked.

“It was like this whole game of ‘well we’ll do it if someone else is involved’,” he said. “So I was finally able to get Alex Wolff for the first read, which was for the “Importance of Being Earnest.”

Crawford explained the process of acquiring actors to The DePaulia. There were many publicists interested in the idea, but the talent themselves were detached or vice versa.

“There were publicists who were not at all interested but once they mentioned it to the talent, I was able to get them to talk to the talent – they were completely on board,” he said.

Actors like Timothee Chalamet were approached for the reading of “The Importance of Being Earnest,” but negotiations with agents made him no longer available. Diana Silvers was also set to appear in the reading but had to drop out of the production.

Crawford partially attributes the project’s success to AFC being one of the first organizations to take live entertainment to a virtual setting.

“Because there was no other organization doing anything like us,” he said. “And everyone’s catching on. We kind of started it beforehand.”

The readings exist in tandem with a GoFundMe page partnered with Mount Sinai Hospital in Chicago. The fundraiser has raised $1,642 of its $1,000 goal at the time of publication.

Crawford said that while he doesn’t believe large public figures have a responsibility to raise funds or awareness for COVID relief, he imagines that many actors are experiencing feelings of fear or trauma amid the pandemic.

“I would say I was disappointed when some actors said no and I thought of it from a maturity perspective that I thought that they could be a little bit more charitable, but again they don’t owe us anything they’re just like us,” he said. “I mean this is generational trauma, I imagine that some actors are just going through trauma and need some space. No one owes anyone anything.”

AFC will continue to hold live readings on Friday afternoons, with upcoming productions including a gender-swapped “Hamlet,” with actors like Madeleine Brewer from “Orange in the New Black” expressing interest in participating, according to Crawford.

Correction: An earlier version of the story incorrectly said the GoFundMe had a goal of $1,600. The story has since been updated to include the correct goal of $1,000.