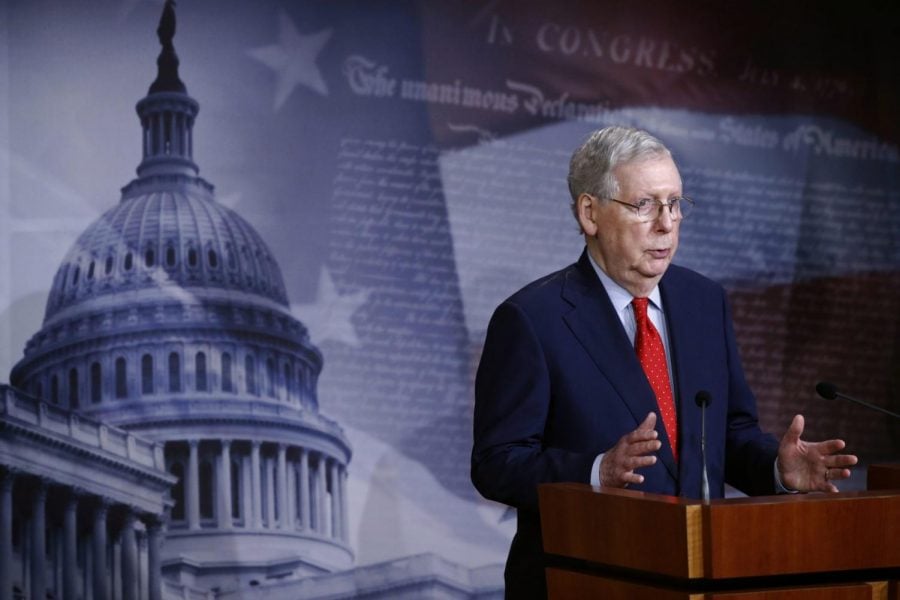 WASHINGTON (AP) — Congress is sprinting to approve the next coronavirus aid package, a $483 billion deal backed by the White House to replenish a small-business payroll fund and pump more money into hospitals and testing programs.

President Donald Trump is urging swift passage this week. The Senate approved the bill Tuesday and the House planned a vote on Thursday.

The bipartisan bill, Washington’s fourth in response to the crisis, is not expected to be the last as lawmakers take unprecedented steps to confront the virus and prop up communities nationwide amid the health crisis.

Most of the funding, $331 billion, would go to boost a small-business payroll loan program that ran out of money last week. There would be $100 billion for health care, with $75 billion to hospitals and $25 billion to boost testing for the virus, a key step in building the confidence required to reopen state economies. There is $60 billion for a small-business loans and grants.

What started as a Trump administration effort with Republicans to bolster the government’s small-business Paycheck Protection Program quickly doubled in size, second only to the nearly $2 trillion coronavirus rescue package that became law last month.

As negotiations dragged on, Democratic demands for additional funds for hospitals and virus testing in the states became more pressing, and eventually gained support from Republicans.

Senate Minority Leader Chuck Schumer said the bill was made “better and broader” by the effort from Democrats.

Of the $25 billion for increased testing efforts, at least $11 billion goes to state and tribal governments to detect and track new infections. The rest will help fund federal research into new coronavirus testing options.

Currently, the U.S. has tested roughly 4 million people for the virus, or just over 1% of its population, according to the Covid Tracking Project website.

While the White House says the U.S. has enough testing to begin easing social distancing measures, most experts say capacity needs to increase at least threefold, if not more.

As announced Tuesday, the centerpiece of the deal remains the small-business payroll program. It provides forgivable loans so shops can continue paying workers while businesses remain closed for social distancing and stay-at-home orders.

Launched just weeks ago, the paycheck program quickly reached its lending limit after approving nearly 1.7 million loans. That left thousands of small businesses in limbo as they sought help.

Controversies dogged its rocky roll-out and Democrats highlighted the number of smaller and minority-owned shops missing out on the aid. A number of publicly traded, big-name corporations also received loans, drawing complaints and Trump’s vow that some will be asked to return the money.

As part of the new agreement, $60 billion or so has been set aside for — and divided equally among — smaller banks and community lenders, a nod to neighborhoods and rural areas underserved by banks.

“This is a significant package,” said Senate Majority Leader Mitch McConnell, R-Ky., ahead of Tuesday’s vote.

The House has asked lawmakers, who have been at home with Congress all but shuttered, to return Thursday for a roll-call vote.

Missing from the package, however, was extra funding for state and local governments staring down budget holes and desperate to avert furloughs and layoffs of workers needed to keep communities running.

Trump said he was open to including in a subsequent virus aid package fiscal relief for state and local government — Democrats had wanted such funding for the current bill — along with infrastructure projects.

At the White House, Treasury Secretary Steven Mnuchin outlined the contours of the next bill, which he said should include the president’s long-promised effort to rebuild roads, bridges and, especially as Americans stay home, broadband.

But facing Republican unease over the White House’s deal-making with Democrats, McConnell indicated he is unwilling to engage in another round of negotiations on his own, without calling senators back for a full vote.

He welcomed the White House plans to start reopening the economy, and signaled similar for Congress.

“Unless we get our economy up and running again, there’s not any way we can spend enough to continue to prop up the country,” McConnell said.

The House planned to vote on a proposal to allow proxy voting during the pandemic, a first for Congress, which has required in-person business essentially since its founding.

“The House must show the American people that we continue to work hard on their behalf,” Majority Leader Steny Hoyer, D-Md., wrote to colleagues.

Many lawmakers are wary of boarding airplanes to Washington and crowding back into cramped offices and meeting spaces. But the landmark rules change met with objections from conservative Republicans.

“Congress should be in session,” said Rep. Clay Higgins, R-La.

Congress is not scheduled to fully resume until May 4, but officials continue to watch virus projections and the District of Columbia remains under stay-at-home rules.