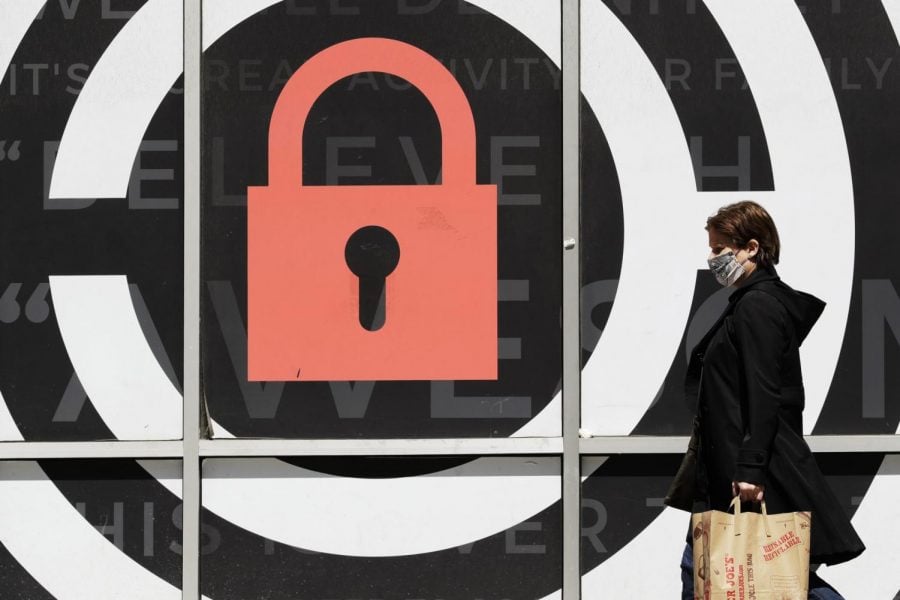 A woman carries a shopping bag as she walks on the sidewalk in downtown Chicago, Tuesday, April 21, 2020. Several major spring and summer events in Chicago have been canceled because of the COVID-19 pandemic.

Gov. J.B. Pritzker on Tuesday said the state wouldn’t hit its highest level of COVID-19 cases until mid-May, weeks after originally projected, throwing into question whether the Democrat will extend his stay-at-home order past April 30.

Pritzker wouldn’t discuss the data he’s using in adjusting the projected peak date, which had been predicted for the latter part of this month. But he said people are abiding by social-distancing rules, slowing the spread of the coronavirus.

“We will be making some changes to the stay-at-home order as it is, but it is true that it is working, so to … remove it entirely is to simply open everything back up to infection,” Pritzker said.

The Democrat’s stay-at-home directive, which urges residents not to leave the house for reasons other than reporting to an essential job or for groceries or medical reasons, is a month old. Last Friday, Pritzker announced that schools, empty since March 17, would continue with remote learning through the semester.

Experts believe a particular area should see declining new-case numbers for 14 consecutive days before re-opening some businesses or relaxing social distancing. Daily counts the last two weeks have been as high as 1,842 and only as low as 1,140.

But President Donald Trump has pushed to “re-open” the the country to salvage a decimated economy and some states are doing so aggressively.

Citizen protests, including small ones in Illinois’ capital, have also been staged and the traditional tensions between Chicago, the state’s COVID-19 epicenter, and downstate are bubbling.

One reporter Tuesday sought Pritzker’s response to complaints that restrictions downstate are “punishment” for a Chicago problem.

It’s true that more rural parts of the state have fewer cases, Pritzker said, but in some areas, the time it takes for the number of cases to double is faster than in urban areas, indicating an aggressive spread. With a case reported in Hardin County, in far southern Illinois, infections have now hit 96 of 102 counties.

“There’s no punishment involved with it,” Pritzker said. “The goal here is to do the right thing for everybody.”

The Cook County Sheriff’s office said Monday that two detainees who died had tested positive for the coronavirus. Officials were awaiting test results to determine if the virus played a role in the death of a second correctional officer.

The sheriff’s office, which operates the jail, said in a separate statement that the body of Antoine Stewart, a correctional officer, was found Sunday in his home in the Chicago suburb of Crestwood. The office said there was no evidence of foul play.

Rivera had most recently worked in the jail’s Residential Treatment Unit and the sheriff’s office said it considered her death in the line of duty.

For most people, the coronavirus causes mild or moderate symptoms, such as fever and cough that clear up in two to three weeks. For some, especially older adults and people with existing health problems, it can cause more severe illness, including pneumonia, or death.