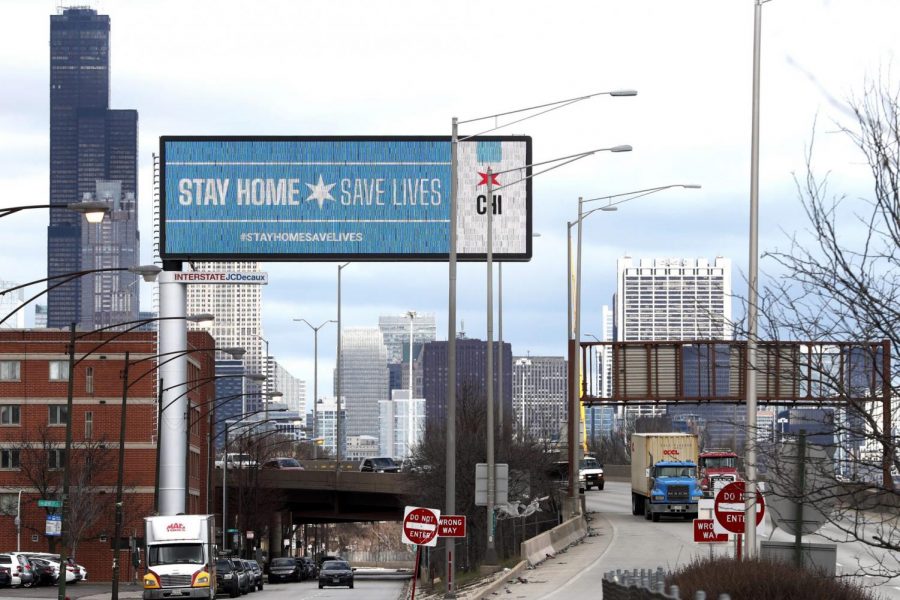 In this March 30, 2020, file photo, a public service message reminding people to Stay Home Save Lives is seen on a billboard near the Dan Ryan Expressway in Chicago. Illinois Gov. J.B. Pritzker on Thursday, April 23, 2020 extended his stay-at-home order through May 30 as the highly contagious COVID-19 continues its rounds. Pritzker's first decree was to expire April 30.

SPRINGFIELD, Ill. (AP) — Gov. J.B. Pritzker on Thursday extended his stay-at-home order through May 30 as the highly contagious COVID-19 continued its rounds.

Pritzker’s decree, which was to expire April 30, was relaxed to allow for some outdoor activities, many previously barred surgeries and medical treatments, and to allow some retailers to reopen to fill online or pickup orders.

While already strongly recommended, face coverings for anyone older than 2 will be required in public, both indoors and outside if the recommended 6-foot social distance can’t be maintained.

“We are in possibly the most difficult parts of this journey,” Pritzker said. “I know how badly we all want our normal lives back. Believe me, if I could make that happen right now, I would, but this is the part when we have to dig in.”

The order is meant to keep people from venturing out and interacting in crowds, an easy means of transmission for the coronavirus.

Experts originally said the number of COVID-19 cases would peak by the second half of April and many predicted the number would be dropping by month’s end. But Pritzker has said the peak won’t come until May, requiring an extension of such efforts to restrict the virus’s spread.

The original order came days after Pritzker closed nonessential businesses and shuttered schools for a period later extended through the end of the academic year. It allowed trips outside the home for reporting to an essential job, trips to the grocery store or pharmacy, medical visits or emergencies. Penalties for violations have been rare.

For most people, the coronavirus causes mild or modest symptoms, such as fever and cough, that clear up in two to three weeks. For some, especially older adults and people with existing health problems, it can cause more severe life-threatening illness, including pneumonia.

In Chicago, Democratic leaders supported Pritzker’s decision, saying while the number of new cases may have flattened, additional protections are necessary until they are on the decline.

“This is a science-based consideration and we want to do everything we can to protect our residents from the terrible impact of this pandemic,” Cook County Board President Toni Preckwinkle said.

House Republicans, eager to have a say in shaping a post-pandemic Illinois, offered their own ideas this week for relaxing the rules to allow parts of the decimated economy to reopen, many of which have been adapted for the new decree.

In a statement, House Republican Leader Jim Durkin of Western Springs took credit for those part of the extended order, which he called “the first step in moving Illinois forward.”

“Working together and implementing smart policy decisions will increase the safety of Illinois residents and allow our economy to begin opening up in an equitable fashion while still protecting employees and customers,” Durkin said.