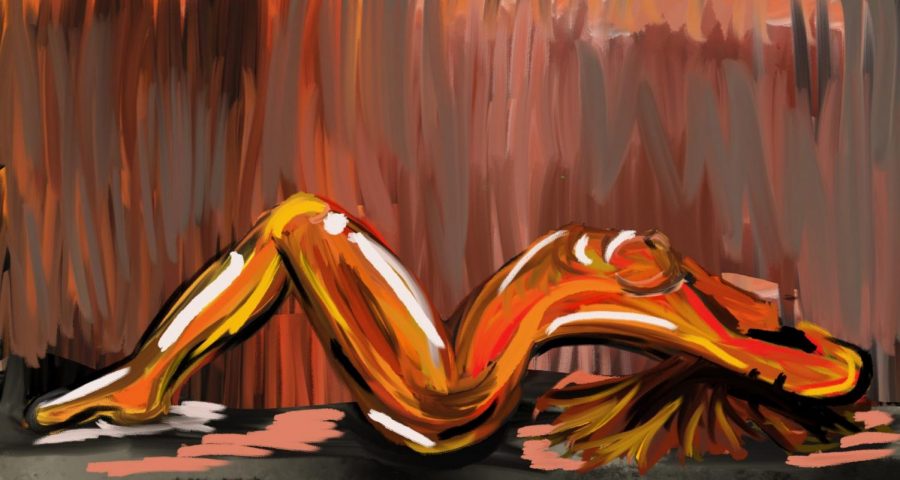 Micah has lived with her boyfriend for three years. She considers herself lucky to be with someone she loves during the lockdown. But her job has started to complicate things — she’s an online sex worker.

Before the statewide lockdown, she made content while her boyfriend was away. Now, that’s not an option — and it’s making things more challenging.

For industry veterans who live with their significant others, the lines between their work and their personal lives have blurred even more than the average worker’s.

Rosemary met her wife in the queer performing scene, so her partner knew what she was getting into when they started dating.

“She fully supports me,” Rosemary said. “She keeps me grounded and she’s like, ‘Okay, you know you can’t show the cats on the cam.’ Security is a big issue, and she’s always on top of it.”

Still, it’s not always easy to manage in the average apartment. Micah has started coping by spending work time in her walk-in closet and staying up all night, making content while her boyfriend sleeps.

Rosemary doesn’t have to go to those lengths to keep her work from bugging her wife, and she’s thankful for not having to hide it.

It’s a sentiment that “out” sex workers — those who don’t hide their profession — sometimes hear from strangers, acquaintances and even friends.

DePaul student Kevin Holechko said he’d happily date someone with an online following, but he would have one concern: their safety.

“Toxic fans are crazy,” he said.

Micah and Rosemary both said their fans are typically well-behaved and supportive. The bad apples are rare, but they’re also inevitable.

Chicago burlesque performer Cruel Valentine, who also does online sex work, said after stay-at-home orders, they’re seeing an uptick in trolls and “time wasters”—people who put lots of effort into making it seem like they’re interested in purchasing content, but never do.

“I had one guy who was like, ‘I still live at home with my parents, I don’t have any money, I don’t have a job, but I really need this! I’m just really lonely and I need you to give me free services,’ basically,” they said. “I was like, a lot of people are really lonely right now. A lot of people are in hospitals and their family can’t come visit them.”

As frustrating as the pity-predators, trolls, and time wasters are, Cruel doesn’t always cut them off immediately—especially if there’s a funny story in the making. Cruel likes to share them on social media, showing fans what they shouldn’t do.

Micah tends to see that behavior more in her social circles than among her fans. Once, a friend on her personal Snapchat account told her, “I wouldn’t marry you, or be with you, or have any interest in you because you have an OnlyFans, but I fully support what you’re doing.”

“Like, why are you telling me this?” she said. “Because one, I have no interest in you, and two, you know what I do.”

DePaul student Matthew Cooper said if he found out a friend or loved-one did sex work, it wouldn’t be that big a deal.

“I’d be lying if I didn’t think there’d be some awkwardness,” he said. “But ultimately, I’d like to think I would support them.”

Micah feels supported by her boyfriend, too, despite the friction between her work and her personal life. That tricky interplay might seem unique to some, but keeping the balance is made difficult by a simple fact nearly everyone can relate to: her job is exhausting.

“Getting ready for hours, background, lighting, framing — there’s a lot that goes into it,” she said. “You’re recording for an hour, and only using five minutes of it.”

Since the shelter-in-place orders began, Micah said she’s spent at least 60 percent more time on her sex work, but not necessarily on making content.

Twitter now claims more of her time than filming and shooting for her OnlyFans page. Sex workers on the social media site form “retweet groups” where each member is expected to retweet each other member to help grow eachothers’ platforms.

“The amount of time spent promoting other girls, in the hopes that they’ll promote you, is insane,” Micah said. “My Twitter has gone from my opinions to just retweets of these other girls. Like, you have to scroll for a minute to find me.”

Shifting to sex work full-time is uncharted territory for Micah, and before the pandemic, Micah did general contracting work whenever she could. Similarly, Rosemary has always had a day job.

“It needs to be your entire life if that’s all you’re doing,” Rosemary said. “It’s possible, just a lot of work… It’s not some quick and easy way to make money.”

CORRECTION: This story has been updated to clarify Cruel Valentine’s approach to dealing with disrespectful fans, or “pity-predators.”