Cuba sends out international aid to ‘protect the Castro image’ 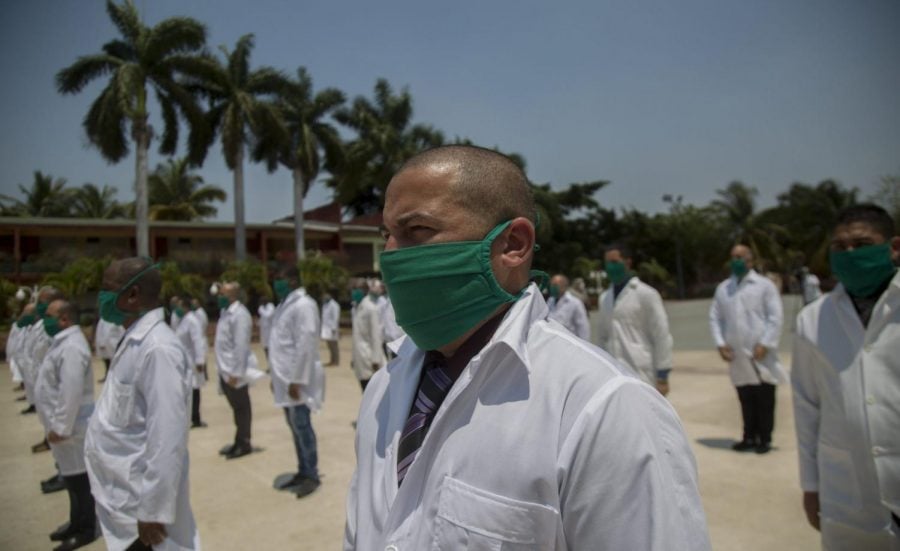 Cuban doctors form up during a farewell ceremony as they get ready to leave for Italy to help with the new coronavirus pandemic, in Havana, Cuba.

The Cuban Healthcare system is reported impeccable with health statistics to support it. Yet, some experts argue that Cuba has a broken health care system with doctor shortages and lack of supplies in hospitals and clinics.

Despite the argument, the country has decided to send out a second round of doctors to Italy to battle COVID-19– aid that may be considered more than just a simple helping hand.

“Cuba is a communist regime,” said John Suarez, executive director at the Center for a Free Cuba. “These types of regimes have other priorities that are not necessarily at the best interest of their respective populations.”

Suarez said currently, the Cuban government is in a desperate situation and their only sources of income are doctors, tourism, oil from Venezuela and even drug trafficking.

But he added since oil prices have collapsed — their one source of income is coming from the exploitation of their doctors and nurses.

“They are getting a propaganda benefit in terms of providing this healing… they’re getting paid…  otherwise, they wouldn’t be doing it,” Suarez added. “Their main sources of income have dried up… we hear complaints from the people on the island that there aren’t enough doctors there on the ground.”

The ideal of ‘exporting communist ideals’ along with the exportation of Cuban doctors is one of the main critics that this mission has received; some of these doctors emphasize that this is a ‘revolutionary duty’ for them as they hold up images of late President Castro with Cuban flags.

Leonardo Fernandez, 68, who is an intensive care specialist, spoke with Reuters and said, “We are all afraid but we have a revolutionary duty to fulfill, so we take out fear and put it to one side… he who says is not afraid is a superhero, but we are not superheroes… we are revolutionary doctors.”

This is not the first time Cuba sends out doctors in order to aid other countries. In fact, Cuba has a history of sending their medical teams to other Latin American countries like Chile and Venezuela.

In 1960, Chile also received medical aid from Cuba after facing an earthquake. Cuba has sent out thousands of doctors to Venezuela in order to exert political control and manipulate voters to continue to support the current regime, according to an article published by The New York Times.

Even with all of the Cuban aid being sent out internationally to combat COVID-19, experts agree that Cuba is still fighting its own crisis.

“If you go to Cuban hospitals you will find out that they’re understaffed,” said Jaime Suchlicki, former director of the Institute for Cuban and Cuban-American Studies in Miami. “A lot of the better doctors are out of the country.”

Suchlicki mentioned Cuba still does not have enough equipment, medicine, or doctors to combat a pandemic and to receive support from the government. Cubans have to show their support for the regime.

“[Cubans] have to say that they are in support of the regime for everything… even if it’s for a can of soup,” Suchlicki said. “Their top priority is economic and second political influence to vote with Cuba and support Cuba’s position internationally.”

Suchlicki said this goes beyond being simple international solidarity in the midst of the COVID-19 crisis– some countries have cancelled their own program with Cuba because of their lack of support for Cuba’s regime.

“Ecuador and Brazil have cancelled the program with Cuba, so all of these doctors came back and now they want to relocate them to other places,” he said. “First of all, there has been change of government in both Ecuador and Brazil and being two governments that are center right in both countries… they do not support the Cuban regime, they are not supporting the revolution, so therefore do not want to have this kind of relationship.”

Despite this, Suarez said that there still may be some positives that can be found within sending some of Cuba’s doctors abroad.

Even though these doctors are sometimes placed in dangerous situations and some argue that they are being overworked and treated as ‘slaves’ — Suarez argues that the communist regime will do anything that can help them maintain a good image, even if it’s fiction.

“They are definitely trying to maintain the fiction of Cuba’s medical superpower and this also serves to benefit it when it exports what appears to be healthcare workers.”