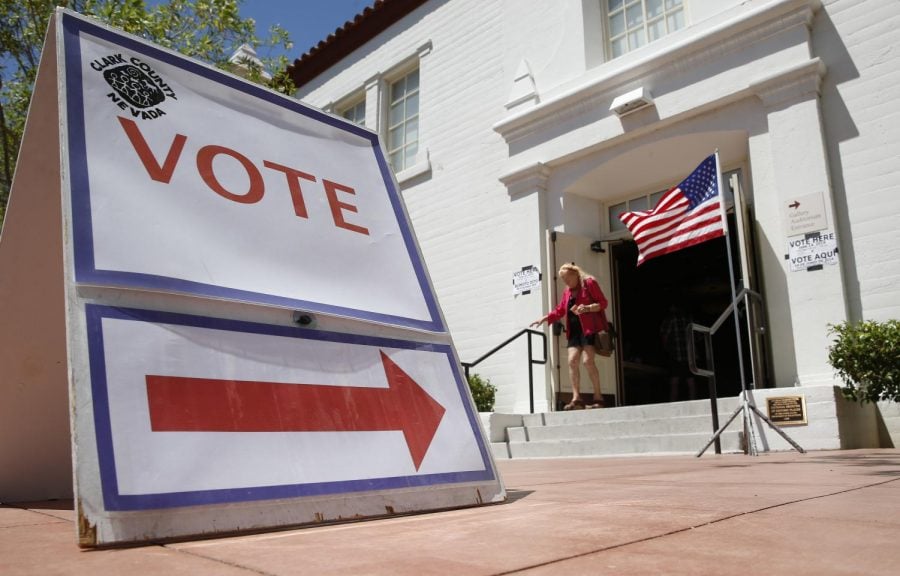 The coronavirus pandemic has caused many publicly favored businesses and hotspots to grind to a halt, whether it be restaurants, bars, clubs, museums, hiking trails — the list goes on. With all of these small businesses shutting down, there’s one event that oddly has not been postponed in some states: primary elections.

Citizens value their right to vote as an essential part of their democracy. However, during a pandemic, voting is the last thing on people’s minds.

In early March, the CDC made social distancing guidelines clear to the public. With many voters standing closely in lines at various polling places, the health of all voters and poll workers should be questioned.

Even with all of the knowledge on social distancing offered to the public, the Illinois, Florida and Arizona primaries still took place on March 17.

“It was kind of weird,” said Annie Noffke, a sophomore at DePaul speaking on her experience voting on election day. “At that point, we knew classes were moved online and things were getting serious, but it was still early enough in March to where it wasn’t sinking in yet… nobody was really wearing masks and gloves.”

This catastrophic result is inexcusable, especially because the states involved had an opportunity to delay these elections. The Ohio primary elections, originally scheduled for March 17, were postponed to April 28 with a large emphasis on mail-in voting. In-person voting will be restricted to a select few who have no other option, according to a report from politico.com.

“[Ohio Governor Mike] Dewine is taking great precautions with the health care system,” said Ava O’Malley, a DePaul sophomore and Ohio resident. “He didn’t get my vote for government, but he’s doing a good job making sure our hospitals are supplied and delaying the election. Forcing people out of their homes during a time like this is not going to make the state government look great.”

DeWine originally pushed for the elections to be held on June 2, but reached a compromise with the state government.

It’s important to question why the governors of Illinois, Arizona and Florida didn’t push harder for the March 17 primaries to be delayed. However, when it comes to state elections and public health concerns, these three are just the tip of the iceberg.

In the weeks before the Wisconsin primary, scheduled to take place on April 7, questions were understandably raised about safety concerns. Gov. Tony Evers attempted to delay the primaries until June, but was blocked with a 4-2 vote by the state’s Supreme Court.

To put this into perspective, Wisconsin’s stay at home order was issued from March 25 to April 24. Why would the state’s supreme court reject the opportunity to postpone the elections, especially when the public is being told to stay inside? Why are the voters being forced to go to the polls?

A photo taken by Patricia McKnight of the Milwaukee Journal Sentinel featured voters in line wearing masks and gloves. The viral photo fixated on one voter holding a sign that reads: “This is ridiculous.”

With the concerns of the virus on their minds, many poll workers didn’t show up to their respective locations. This caused  Milwaukee to go from 180 polling places to five, according to a report from the National Review.

“I definitely don’t think [social distancing] would be easy, considering the amount of polling places that were consolidated,” said Ben Knape, a DePaul sophomore. “Even if you’re following social distancing, there’s still so many things that you’re touching. A lot of risks were just glazed over.”

Not only are these elections a public health concern, but there should also be skepticism about the accuracy of them as well. With many afraid to go outside, wouldn’t there be a skewed turnout?

“Despite all the attention, turnout in Wisconsin was actually down. This is due to a lot of factors, of which COVID-19 was just one,” said Molly Andolina, a DePaul associate professor of Political Science. “Then, of course, there was the issue of long lines in many places, especially in Milwaukee, where the typical number of polling places was cut down to five, and long lines made voting hard.”

At the end of the day, it’s those who are elected to serve the interests of the people that are responsible for those who get sick. With Ohio as a prime example, there’s no excuse why state representatives didn’t try harder to postpone the elections.

“Some states were able to easily postpone their primaries,” Andolina said. “Others forged ahead and tried to use the pandemic as a means of limiting people’s access to the polls. States need to get ready now for the challenges of November. We should always be working to make it easier, not harder to vote.”

As a result of the Wisconsin primary, a report cites at least 40 individuals contracted COVID-19 due to election related activities. Hopefully, with the information about these individuals in the public eye, more states will take more action to postpone their primaries — human lives are at stake.

The justices who blocked the governor’s request have blood on their hands, as well as any other state officials who refuse to do what’s right for the public.