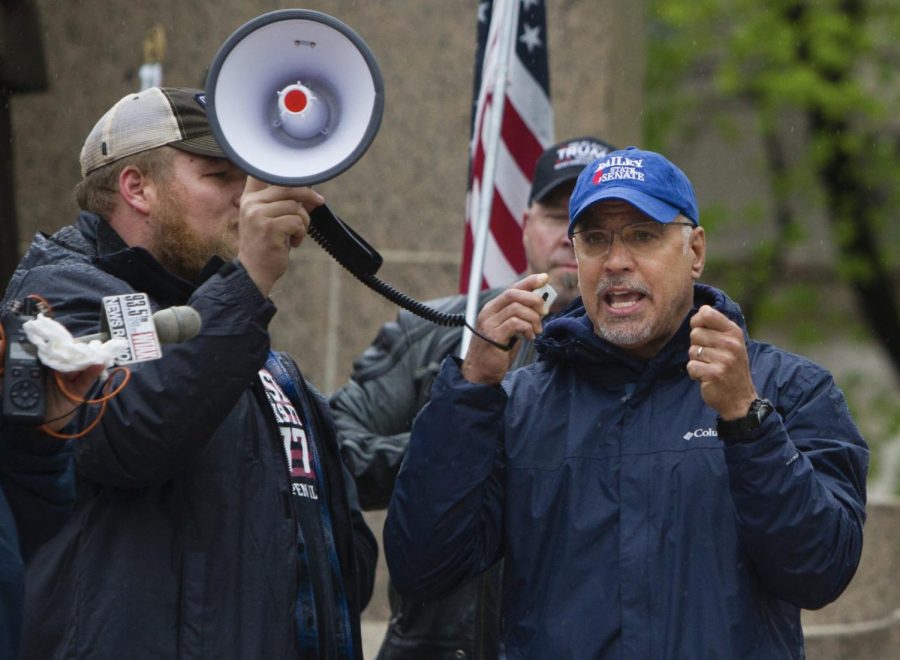 In this April 25, 2020 file photo, Illinois State Rep. Darren Bailey, R-Xenia, right, speaks at a protest against Gov. J.B. Pritzker's stay-at-home order in front of the Capitol building in Springfield, Ill., during the coronavirus outbreak. A judge in southern Illinois ruled Monday, April 27, 2020, that Pritzker's stay-at-home order to stem the spread of the coronavirus exceeds his emergency authority and violates individual civil rights.

A judge in southern Illinois ruled Monday that Gov. J.B. Pritzker’s stay-at-home order to stem the spread of the coronavirus exceeds his emergency authority and violates individual civil rights.

Clay County Circuit Judge Michael McHaney sided with Republican Rep. Darren Bailey, who sought a temporary restraining order against the Democratic governor’s far-reaching executive decree. Pritzker has relied on an April 2 statewide disaster declaration as authority to close schools, shut down nonessential businesses and limit movement by individuals from their homes because of the potentially deadly COVID-19.

Pritzker accused Bailey, a Xenia resident, of being “blindly devoted to ideology and the pursuit of personal celebrity.”

“It’s insulting. It’s dangerous and people’s safety and health have now been put at risk,” Pritzker said. “There may be people who contract coronavirus as a result of what Darren Bailey has done.”

Pritzker promised “swift” action to overturn the judge’s order, which applies only to Bailey but allows other individuals and groups to challenge the movement restrictions while the highly contagious illness circulates. Bailey said he considered inviting a group of taxpayers to join him but his lawyer suggested a decision would come more quickly if he acted alone.

“We continue now to do what we do best: Live safely, respectfully and … to take certain precautions, but not to be limited by government,” Bailey said outside the courthouse.

Pritzker signed an order earlier this month allowing furloughs for elderly inmates or those with health conditions, who are considered “medically vulnerable” to contracting and spreading COVID-19. Roughly 36,000 people are incarcerated in Illinois facilities and civil rights advocates have raised concerns about inmate welfare.

GOP lawmakers contended their requests for details on how release decisions are made and who’s been freed have been ignored.

“Our concern is that the governor and IDOC are using this pandemic as a way to push their political agenda of releasing inmates, rather than actually looking out for the public safety,” said Rep. Avery Bourne of Morrisonville.

State officials have not been specific on the numbers.

Illinois’ prison population has been reduced by about 1,300 inmates, Pritzker said Monday, but he didn’t specify a timeline or breakdown. He said he would gladly provide the necessary numbers and his spokeswoman suggested contacting IDOC for the information.

But in response to an Associated Press public records request for the names of inmates released because of the pandemic, IDOC provided a link to an online document showing all inmates released since March 1. The list of roughly 3,900 inmates doesn’t include the reasons for their release.

For most people, the coronavirus causes mild or modest symptoms, such as fever and cough, that clear up in two to three weeks. For some, especially older adults and people with existing health problems, it can cause more severe life-threatening illness, including pneumonia.