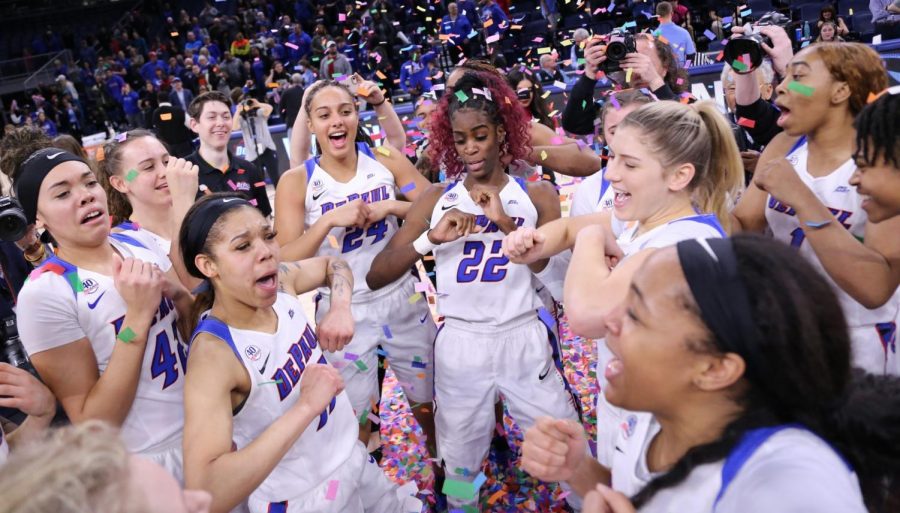 Building a team and building a program are two completely different ideas. These are two ideas that DePaul women’s basketball deals with every season as they continue their 17 straight NCAA tournament streak while retooling each season to adjust for key losses.

Last season, the team graduated Ashton Millender and Mart’e Grays, who combined for 27.5 points in the 2018-19 season. This year, Kelly Campbell and Chante Stonewall filled that senior role while sophomores Lexi Held and Sonya Morris made massive leaps in the scoring department, leading the Blue Demons to a 28-5 record overall.

The team ran the gauntlet of the Big East tournament in 2020, winning their third straight conference title over rival Marquette, but their chances at further glory were abruptly cut off not even a week later when the COVID-19 pandemic forced the NCAA to cancel the tournament.

Now, as players and coaches sit at home awaiting the next season, there’s a burning hunger to get back out on the court when the time is right and add another great team to the successful program.

Seniors Stonewall and Campbell are departing the program, as well as freshman guard Marisa Warren who entered the transfer portal earlier in April. But the team retains Held and Morris as well as Deja Church and Dee Bekelja, all major contributors to last years’ success.

“It’s going to be really hard to replace Chante and Kelly, but that’s what you try to do when you’re building a program, is to make a program sustain based on the growth of the younger players as the older players exit,” head coach Doug Bruno said. “That’s the whole idea of program building versus team building.”

The seniors on the roster next season will be Church, Bekelja, Kiara Dallmann along with graduate transfer Courtney Fredrickson, who is coming over from Wisconsin. Church and Bekelja both started games last season with Dallmann returning in December from an injury that sidelined her from basketball for eight weeks.

Lexi Held and Sonya Morris both averaged over 15 points a game as sophomores last season with Morris winning the Big East Most Improved Player Award. They led the team in 3-pointers made while starting every game they played. The two are the top two most ferocious scorers on the team now that Stonewall has graduated.
Held scored 31 points in the Big East championship game this season, before she got a chance to continue her hot streak into the NCAA tournament, the season was abruptly canceled. Now, Held can only look to what’s ahead.

“It has been a very unusual transition,” Held said. “However, given the circumstances, there is nothing we can do but keep moving forward. It’s very unfortunate that we didn’t get to play the season out, but the best thing we can do is get better for next season. I think the best way to do that is to turn our focus to next season.”

The team has been doing that by meeting on zoom multiple times a week and talking about plenty of non-basketball things during this offseason time.

“We get together on Zoom, as a team, about 2-3 times a week,” Morris said. “We still stay super connected and in touch to keep building team chemistry and bonds off the court.”

Morris’ jump from freshman year to sophomore year garnered her more playing time, more opportunities to make a difference, and the conference’s most-improved award. But she will be the first to tell you there is far more to come.

“I’m just trying to take this adversity and make the most of it in preparation for next season,” she said. “There’s plenty of time and space outside to be running and getting in better shape.”

Held is also hoping to improve on her game through fitness. The sophomore averaged 15.4 points on 42/36/85 shooting splits on her way to being named Big East tournament MVP and an honorable mention all-conference player.

“Strength and fitness is always an area that I can and want to improve on, as well as tightening up my ball handling and becoming a more consistent shooter,” Held said.

Players trying to get exercise in can be difficult during this time. Even though strength and conditioning coaches can send workouts to players, there is nothing that allows programs to make those workouts mandatory, given the circumstances of players not being at school. Regardless, the team is figuring out how to put in the work.

“When [quarantine] ends, we owe it to ourselves and to each other to be in the best place we can be from a fitness perspective,” Bruno said. “Players are doing this through weights if they have them, body-weight exercises and cardio workouts. Ultimately, it’s a personal responsibility. Our basketball might be rusty when we reconvene, but our fitness does not have to be rusty.”

DePaul currently is in the same spot as the other 10 Big East teams with quarantine. The team has won three straight tournament championships and the target on their back has grown even more. This upcoming season, UConn will return to the conference for the first time since realignment in 2013.

“It’s no different for us, we have played UConn and Notre Dame every year,” DePaul athletics director Jean Lenti-Ponsetto said. “So, DePaul is used to playing the upper echelon of college basketball in both men’s and women’s basketball. DePaul has been playing UConn for the last 15 or 16 years, and has been playing Notre Dame for a lot longer than that. Two storied programs in college basketball that have a lot of NCAA Final Four appearances. I think it’s going to be a really competitive league — we welcome UConn and look forward to joining us.”

Bruno hasn’t shied away from the UConn addition, as his team has played UConn in non-conference each season since realignment, but without a win over the best program in division one basketball history.

“Whereas it will be much more difficult to win a Big East championship with UConn in the field, their presence helps the other 10 of us get better against the rest of the NCAA field and that’s what excites me,” Bruno said in July to the Hartford Courant.

But besides their addition, the rest of the conference is expected to get better and more competitive.

“I think it’s safe to say that every single team in the league has gotten better since realignment and they’re only going to continue to do so,” Bruno said.

Joining Fredrickson in the transfer portal is Indiana forward Jorie Allen, who will sit out a year due to NCAA transfer regulations. The team is also adding two freshman guards in five-star recruit Darrione Rogers and three-star recruit Kendall Holmes. Rogers was second in voting for the Illinois Miss Basketball award.

Replacing Campbell and Stonewall on the court is one thing, but off the court is another battle. The two were well-respected leaders for the team while garnering awards for service and academic excellence.

“With Kelly and Chante leaving, there are definitely some roles that need to be filled,” Morris said. “They were great leaders of our team, so myself and the other returners are definitely expected to step up and take on that role.”