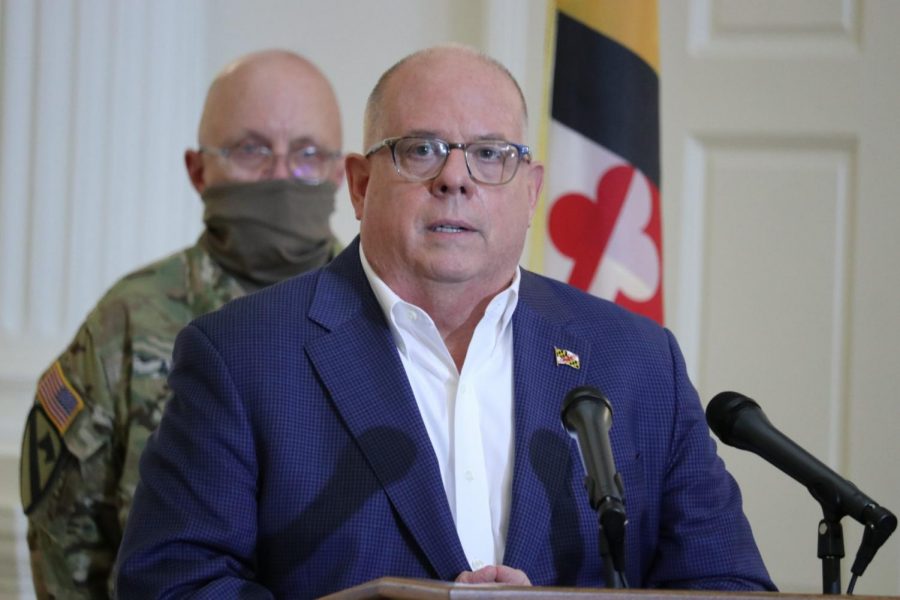 Maryland Gov. Larry Hogan announces that all nursing homes and assisted-living facilities in the state must conduct universal coronavirus testing of all residents and staff, whether they have symptoms or not, during a news conference on Wednesday, April 29, 2020 in Annapolis, Md. Col. Eric Allely, the state surgeon of the Maryland National Guard, is standing behind the governor. Allely has been named a compliance officer to see that nursing homes comply with state law.

As a Maryland native of the past 18 years, I’ve never felt more lucky and confident to live here, especially under Gov. Larry Hogan’s leadership.

The second-term Republican has proven once again that he’s fit for his job, and his handling in times of crisis has only gotten better during the COVID-19 pandemic. And time and time again, he has put the needs of the people over party – even if it goes against the White House – an extremely rare sight in the world of today’s politics.

“This weekend, we took an exponential, game-changing step forward on our large-scale testing initiative,” he said during a press conference last Monday in Annapolis.

The $9 million shipment from South Korea can roughly test one out of every 12 Marylanders, which will ramp up daily testing to 10,000 people. And Hogan isn’t stopping there – he wants to double that number to 20,000 a day while continuing to receive necessary supplies.

“I want to thank Maryland’s first lady – my wife, Yumi,” he said during the press conference.

Out of the 62 governors who’ve held office near the Chesapeake Bay, Yumi is the first Asian first lady in the state’s history, and the only Korean-American first lady of any state in the history of the U.S.

“It’s why we have – and we’re so proud to have – such a special bond with South Korea,” the governor said.

After watching the press conference in full, I could not have been more impressed with how much Hogan – including his wife – handled the pandemic for Maryland.

But I’ve kept a close eye on Chicago, too. A month and a half ago, I was still living in my apartment at the University Center in the Loop, unsure of what to do when the virus began to make headlines across the country. I’m still unsure if I’ll be able to move back in the fall, but I was even more thankful to have the necessary resources to move out and quickly get back home to the east coast.

Day by day, governors are pulling more of the weight of their state’s residents – even Illinois Gov. JB Pritzker has grown sharply critical of President Trump and the federal government’s handling of the virus. The same can be said about Hogan, who, as a Republican, has contradicted the federal government on many levels and took control of tackling COVID-19 as it pertains to his state.

And I told that to my father as well, who has been watching the daily White House briefings every day. This isn’t about party.

There isn’t enough being done on the national scale. Pay attention to what your state officials are doing. They directly impact how you live.

Trump then explains the accessibility of federal testing sites available by state, claiming that Hogan never knew about the labs and could’ve utilized them sooner than later.

“He didn’t understand too much about what was going on, so now I think he’ll be able to do that,” Trump said.

Trump’s comments quickly backfired not long after he made them, as Hogan stated that those federal labs have been inaccessible to the state for the past month, including the ones listed by the White House.

And they were – until after he announced the test kits during last Monday’s press conference.

“I’m really not sure what he was upset about,” Hogan said in an interview with Sandra Smith on Fox News. “We did what he told us to do – which was to go out and get our testing – and we had a great call with his entire team. I don’t think he was on the call and didn’t understand what the discussion was about, but I have no idea what he was upset about.”

The clash between the two Republicans has shown a growing divide between the federal government and the states, who have been forced to largely handle the virus on their own terms with little assistance from the White House.

Even a handful states led by Republican governors have begun to re-open their economies such as Tennessee, Mississippi, Oklahoma and Alaska. But most notably, Georgia lifted stay-at-home restrictions entirely on Friday, even though the order only lasted a total of 21 days.

“It’s unfortunate that we have so few tests and such a failed system for states getting what they need,” said Molly Andolina, an associate professor in the political science department at DePaul. “Certainly, when there are disasters, the federal government works with state and local governments to provide support and assistance.”

But when does that assistance – especially from the federal government – become too little? When does authority cross the line and fail to provide for its citizens?

Those 500,000 additional tests nearly equate to the total amount of testing already completed by four of the top five states in the U.S. combined, according to Gov. Hogan.

Yes, Maryland is at an advantage when it comes to testing, thanks to First Lady Yumi Hogan. But for a state that neighbors with D.C. and prides itself on blue crabs and lacrosse, it should not have been this hard.

Keep in mind: the White House is a 40-minute drive from Annapolis.

The funny thing is, Trump has largely left the governors of each state to handle the virus and figure out testing on their own. And when a governor did just that, he criticized him for it.

Rapid testing needs to be done. Citizens should not have to worry about accessibility and failed leadership during times of crisis. And it should not have taken this long to react, especially on a national scale.

And again, governor Hogan has proven to the country why he’s a leader.

Correction: The headline has been updated to reflect the writer’s argument.