OPINION: Not all Bernie Sanders supporters will automatically back Joe Biden 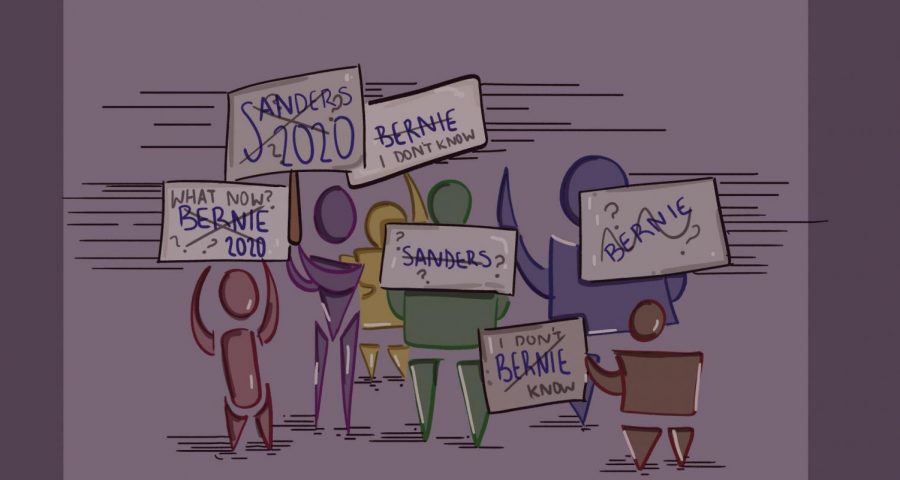 When Bernie Sanders announced the suspension of his campaign two weeks ago, I began to have flashbacks to the 2016 presidential election.

After he dropped out and endorsed Democratic presumptive Hillary Clinton four years ago, many progressive voters felt disheartened for having to cast a vote for yet another moderate Democrat or conservative Donald Trump.

Sanders has suspended his latest campaign to focus on fundraising for coronavirus relief, and endorsed candidate Joe Biden. After a strong Super Tuesday performance, the former Vice President took the lead in the primaries over Bernie when he won 10 out of 14 states. It’s predicted that Biden, another moderate, will be the Democratic nominee.

But for many Bernie supporters, the vote for Biden in the general election is still up in the air. In a poll from March, four out of five Sanders supporters said they would vote for Biden, with 15 percent saying they would cast their vote towards Trump, about the same amount that did back in 2016.

Ethan Jantz is a graduating student at the University of Illinois Chicago and a member of the Chicago Democratic Socialists of America. He shares that often he goes back and forth between his voting decisions for the general election.

“[Biden’s] lack of reaction to anything, his inability to get people motivated and the already clear generational lines between Biden space and Bernie space really shows that there’s just not really much enthusiasm for Biden,” Jantz said.

The 2020 Democratic Primaries initially embarked with a record number of nominees which instilled a sense of hope that the next Democratic nominee could finally be a progressive.

But after that hope dwindled away, progressive voters like myself are stuck repeating the same history of feeling like they may have to choose between the lesser of two evils or not vote at all.

Some Bernie supporters are finding it difficult to find enthusiasm to back a candidate so unlike the one they had their dreams set on, and for good reason.

“Sanders’ supporters fear that the Biden wing, which was the Bill/Hillary Clinton wing, are much too moderate in its support of issues of the military, financial institutions, and corporations,” said R. Craig Sautter, an instructor at DePaul’s school of continuing and professional studies..

As for being a Progressive it does not seem like Biden and the Democratic establishment share many of the same aspirations. Biden does not seem fully on board towards Medicare for All, the complete cancellation of student loan debt, a Green New Deal and Housing for All. All of these issues were heavily focused in Bernie’s campaign.

When it comes to deciding whether to vote for Biden, pencil in another candidate, or to not vote, people need to be cautious as to standing by a decision that will affect them for years. Whatever voters decide, it’s important to proceed pragmatically, but it’s completely ethical to acknowledge your moral principles while doing so.

“It is just very disappointing to feel like having to settle for slightly better,” Veivia said. “I really think people should just do what they think is right. I think that the people need to focus on change.”

As a college student who is yearning for progressive president, I feel morally obstructed as I come to terms with my voting choices for the general election.

“I think the Democratic party is doing the exact same thing with Joe Biden that they were doing with Hillary back in 2016,” Veivia said.“And that is running the most neutral moderate candidate possible in order to appeal to the most people and I don’t really think that is going to be very effective.”

If Biden truly wants to  bridge the gap between Bernie supporters and our progressive aspirations, he has a long way to go and it might be too late.

He already upholds a few progressive policies. To name a few, he supports raising the minimum wage to $15 an hour, the elimination of the private prison system, and the cancelation of student debt – to a degree.

He can engage in more progressive policies that Sanders supported like Medicare for All, but he must do so enthusiastically and resiliently as Sanders did. He could bring on a progressive Vice President, one that can capture a wider audience of progressive voters.

But truthfully, if Biden restructures his policies to be like Bernie’s, it will still be hard for Bernie supporters to be fully on board.

That, and Joe Biden has a sexual assault allegation made upon him.

Frankly, there is just too much we do not know about Biden, especially when it comes to the sexual assault allegations made by his former staffer, Tara Reade.

Throughout his political career, Bernie upheld a platform that energetically focused on bringing attention to survivors and their stories. Biden has a similar history. In 1990, he fronted the groundbreaking Violence Against Women Act, which brought attention to domestic violence and sexual assault towards women.

But Bernie is not the candidate accused of sexual assault.

With this latest allegation towards Biden, it seems that his campaign for so long was fixated towards keeping Tara Reade’s story mitigated as “hush-hush.”

Biden did appear recently coming forth on the “Morning with Joe” show about the allegations by saying “This never happened.”

But he did say that he is requesting that the Secretary of the Senate ask the National Archives to look for any record of the complaint Reade had filed after the assault took place, and make it available to the press.

The Democratic party stood out to believe survivors in the past when it came to Trump’s allegations as well as Associate Supreme Court Justice Brett Kavanaugh’s – to not listen to or apply credibility to Reade’s story would be a critical fallacy of the party’s morals.

Although he spoke up on the matter, it still took over a month for Biden himself to acknowledge the allegations and take action towards transparency.

It feels the Democratic party has given progressive voters the metaphorical middle finger by ousting Sanders once again.  Progressive voters are guilted into the agenda of “vote blue no matter who,” which is morally restraining when the presumptive candidate upholds a platform that veers from your political objectives, has been accused of sexual assault and deferred to be transparent of the incident at hand.

“We need to believe all women,” said Arad Boxenbaum, the creator of the DePaul for Joe Biden Instagram page. “And Tara Reade, her allegations need to be investigated with an unbiased lense, that’s the America we want to have, the America where women are not afraid to come out against the person who sexually assaulted or raped them.”

Boxenbaum shared that it’s understandable for not only Bernie supporters, but other Democrats to struggle to come to terms with Biden as the nominee. But he believes that Biden is the answer for progressives, for the moment.

“There’s a few things to acknowledge about Joe Biden’s campaign,” he said. “One is he’s the most progressive nominee that the Democratic Party has ever had. While he’s not progressive enough in certain categories depending on your opinion. It’s a step in the right direction. We also have to think about what we’re up against. If you want a progressive platform, we’re not going to get that with Trump – at all. And we’re certainly not going to get that for the next few decades, at the current rate that he’s packing the courts.”

It’s unsure of if Biden will uphold policies that are enlightening towards any sort of radically progressive movement. But defeating President Trump seems to be the underlying policy of both political objectives; progressive or moderate, Bernie or Biden.

As a Bernie supporter, it’s extremely hard to come to terms with the end of his campaign, and having to possibly settle for Biden. But it’s important to hold onto the hope that Sanders was not the end of the line for progressive candidates, but the very start.

“I don’t think that Bernie was the be-all and end-all progressive candidate,” Jantz said. “ I think the movement will continue on and is stronger from his campaign having existed.”

Where your enthusiasm lacks for Joe Biden, I recommend those morally conflicted like myself, to find the enthusiasm to keep fighting for a progressive movement in the long run. Whether that means organizing for 2024 or keeping up with your local politics and movements, a progressive change doesn’t end here.

There is very little that can help make our voting decisions feel less morally divisive. It’s understandable for progressives to feel helpless while weighing out your decisions; this may be an election of the lesser of two evils.

But remember that voting is not the final political action and this election is not the end for progressive change.