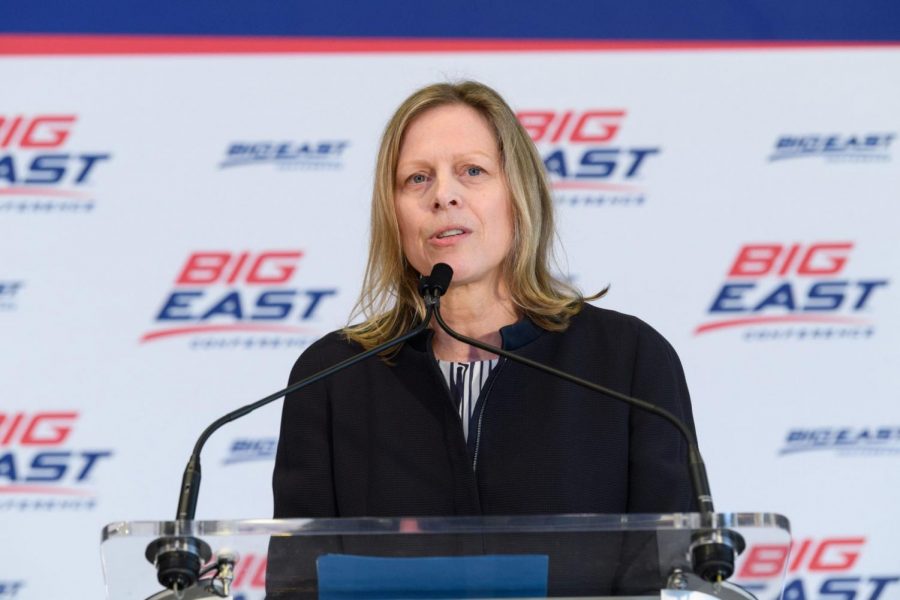 With the coronavirus pandemic altering life for people all over the world, only one thing is certain right now — nothing is guaranteed the next day. In the world of college athletics, there are no guarantees regarding how sports will return to schools for the 2020-21 academic year.

During a media call with reporters on Friday, Big East commissioner Val Ackerman emphasized that the conference has yet to decide what they will do with fall and winter sports. But she did guarantee one thing regarding fall sports — if a school inside the conference isn’t holding in-person classes, then they will not be participating in conference sports.

“If our campuses are not open, we will not have athletes coming back,” Ackerman told reporters.

With multiple Big East schools residing in states that have been the hardest affected by the coronavirus, New York, New Jersey and Illinois, it’s not clear yet when those states will fully reopen and what restrictions will be in place for universities in those areas. However, Ackerman did point out that NCAA conferences could play their fall sports if they have a six-member requirement.

“Any school that’s lucky enough to be back in business should allow their athletes to resume activities,” Ackerman said.

While those decisions have yet to be made by the Big East and schools in the conference, Ackerman did point out that the conference is looking at alternative schedules for the fall. As for sports after the fall, business is expected to go as usual for now.

“We are proceeding right now as if it’s business as usual,” Ackerman said regarding the 2020-21 Big East basketball season.

The Big East shutdown all sports for the rest of the 2019-20 academic year in March due to the pandemic, and cut the men’s basketball tournament short after the first night of play. Due to an NCAA vote, athletes with expiring eligibility at the end of the school year were granted an extra year of eligibility to use next season.

Ackerman noted that the Big East had insurance on the men’s basketball tournament, so they won’t take as much of a revenue hit.

DePaul athletic director Jean Lenti Ponsetto has had to deal with the cancellation of this season, but is looking forward to working on next season. DePaul currently has set June 15 as a tentative date for a decision on if fall quarter will be remote, partially remote, or fully in person.

“Discussions are ongoing in regards to fall sports both here on campus and across the country,” Lenti Ponsetto said in a statement to The DePaulia. “As Dr. Esteban mentioned on Wednesday in his COVID-19 update for the university, planning is ongoing for the fall and an announcement could be made as early as June 15. Athletics will take its lead from that directive for campus operations not only for fall sports, but all programs. In regards to BIG EAST fall sports, we are in constant contact with the conference office and membership as we all move forward in these uncertain times.”

While DePaul is still deciding what they plan to do with fall quarter, Ackerman still believes that the Big East Tournament will take place next March at Madison Square Garden. The Big East is bringing back UConn, who left in 2013 to the American Athletic Conference, and will transition into a 20-game conferenceschedule for both men’s and women’s basketball.

A decision regarding fall sports won’t come down until late June or early July, which is around the same time when DePaul said they will announce if they will be holding in-person classes for the fall quarter.

But a decision for the 2020-21 basketball season won’t be made until around Labor Day, according to Ackerman.