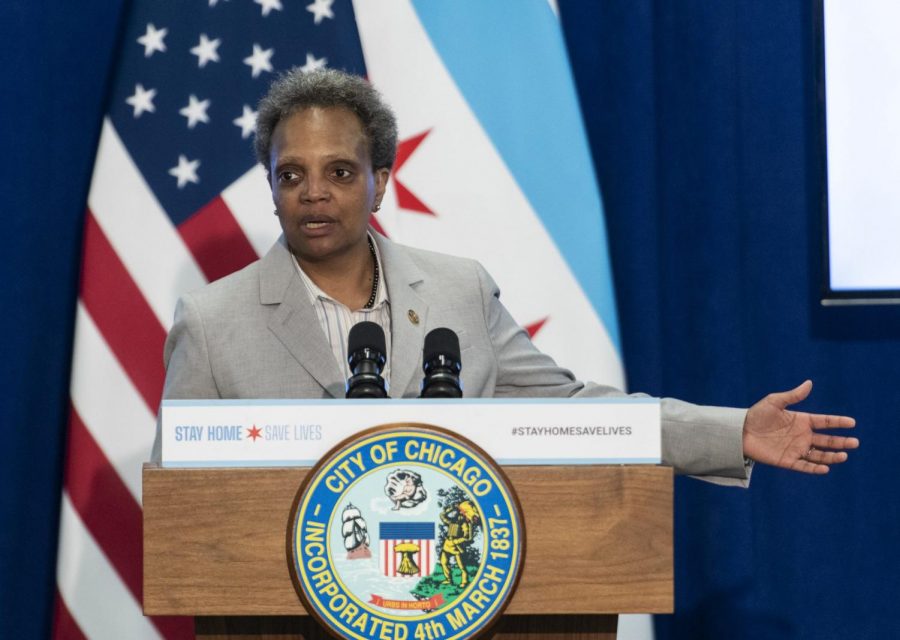 Mayor Lori Lightfoot answers a reporter's question during a news conference to provide an update to the latest efforts by the Racial Equity Rapid Response Team in Chicago on Monday, April 20, 2020.

Chicago Mayor Lori Lightfoot on Friday released the city’s five-step path toward re-opening, which includes some stricter standards than the state plan released earlier this week.

Lightfoot warned that progress is dependent on residents continuing to stay home through the month of May to limit the spread of the coronavirus, which has killed 1,248 people in the nation’s third-largest city.

Lightfoot’s plan projects substantial changes to life in the city even after restrictions start to loosen, including continuing to require people to wear face coverings through the fourth phase. Chicago is in the second phase of the plan, which requires people to stay home except for essential activities or work.

“As hard as it’s been, we are getting through this,” Lightfoot said. “But we must continue to work hard and be diligent. This is truly an experience like none we’ve ever seen before and we have to do it together as one city.”

Illinois Gov. J.B. Pritzker’s plan split the state into four regions that can advance — or be forced to pull back — independently of the others based on certain factors. Chicago is included in the northeastern region along with the rest of Cook County and eight surrounding counties.

The city’s initial plan did not specify the types of industries or public amenities that could reopen at each step, unlike the statewide five-phase strategy Pritzker released Tuesday.

Lightfoot said the city has organized working groups to get input on how different businesses could reopen with safety precautions for workers and customers, and she said more details would be released soon.

The restaurant industry, in particular, has bemoaned provisions of Pritzker’s plan that would likely keep dining rooms shuttered into June.

Restaurants could not resume dine-in service under the state’s plan until their region has a rate of positive COVID-19 tests at 20% or lower, steady admission rates at hospitals for 28 days and medical facilities with enough space to handle surges of new patients. The state plan also set benchmarks for the availability of testing and public health officials’ ability to trace contacts of people who test positive for the virus and help them to self isolate.

Chicago’s plan is centered on similar statistics within the city’s health care system, but its requirements include a decline in new cases and emergency room visits, along with a 15% average rate of positive tests among those performed by health care providers in a 14-day window.

It also requires a 30% average rate of positive tests in nursing homes, jails and other settings that have reported higher rates of the virus.

Pritzker said Friday that he believes those requirements make the city’s plan more stringent than the state’s approach. He said local governments can adopt stricter standards than Illinois will use for its broader regions.