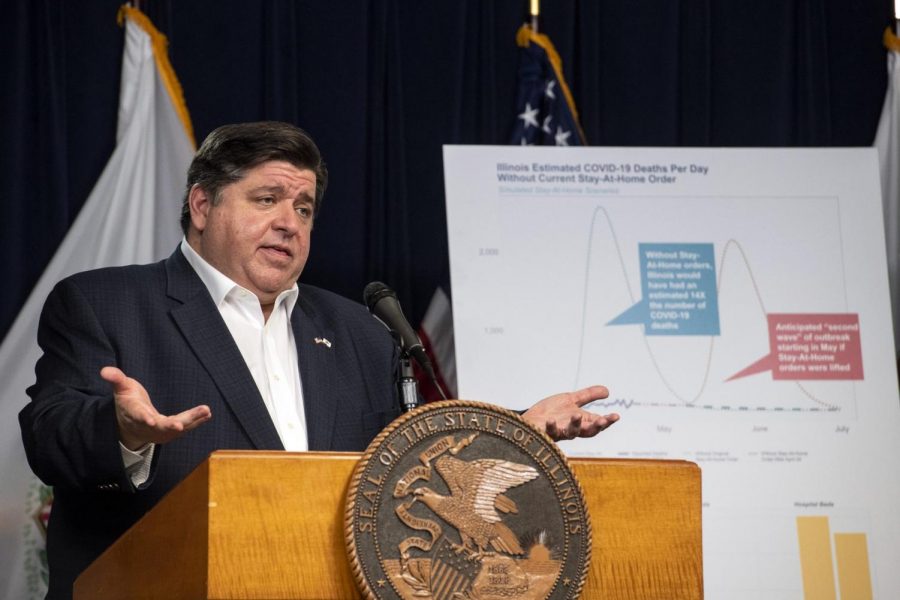 In this April 23, 2020 file photo, Gov. J.B. Pritzker announces an extension of the stay at home order for Illinois as well as a mandatory face covering order at his daily Illinois coronavirus update at the Thompson Center. Illinois State Rep. Darren Bailey, R-Xenia filed suit against the order, and a judge in southern Illinois ruled Monday, April 27, 2020, that the Illinois governor's order to stem the spread of the coronavirus exceeds his emergency authority and violates individual civil rights.

Gov. J.B. Pritzker defended his stay-at-home order and incremental plans to reopen, saying Sunday that Illinois residents have to change the way things are done until COVID-19 is “eradicated.”

The Democrat’s comments on CNN’s “State of the Union” came as he faced a southern Illinois salon owner’s lawsuit, criticism from some Republicans who deem his plans an overreach and a Chicago Tribune editorial accusing him of being “cautious to the extreme.”

“The truth is that coronavirus is still out there,”‘ he told CNN. “It hasn’t gone anywhere. And so we all are going to have to change the way we do things until we’re able to eradicate it.”

While the number of hospitalizations has remained mostly flat, Illinois continues to report a high number of daily cases and deaths. On Sunday, health officials announced 1,656 new cases of COVID-19, including 57 additional deaths. Since the start of the outbreak, 77,741 cases have been reported statewide, with 3,406 deaths. The number of infections is thought to be far higher because many people have not been tested, and studies suggest people can be infected with the virus without feeling sick.

For most people, the coronavirus causes mild or modest symptoms, such as fever and cough, that clear up in two to three weeks. For some, especially older adults and people with existing health problems, it can cause more severe life-threatening illness, including pneumonia, and death.

Pritzker said Illinois has been testing far more than other states, surpassing 20,000 daily tests Friday. The governor first issued a stay-at-home order in March, which has been extended to the end of May with some restrictions eased, including the reopening of some state parks. He released a five-phase plan Tuesday making reopening contingent on meeting certain metrics, with the last phase allowed only if there’s a vaccine or an effective treatment.

The moves have drawn complaints.

“Jobs, businesses, livelihoods and much more are being permanently — and unnecessarily — lost by the governor’s ham-handed approach to reopening Illinois,” said state Sen. Jason Plummer, an Edwardsville Republican, according to The Alton Telegraph.

Pritzker has also faced lawsuits, including one filed Friday in Clay County by salon owner Sonja Harrison. She alleged that Pritzker didn’t have constitutional authority to close her business, Visible Changes. A judge in the same southern Illinois county has already ruled in favor of one Republican lawmaker who claimed the order violated his civil rights. The state has appealed.

Also Sunday, a Chicago church that sued Pritzker over the stay-at-home order became the latest to defy restrictions limiting worship to 10 people. Roughly 70 people attended Elim Romanian Pentecostal Church, according to the Chicago Sun-Times. Masks, gloves and hand sanitizer were made available. Cristian Ionescu, the church’s senior pastor, directed worshipers to stand 6 feet apart inside the church that has capacity for roughly 1,400.

“We feel that we are discriminated against,” Ionescu told the Sun-Times. “We follow the same rules as other places that are also considered essential, and yet we cannot have more than 10 people in a service, which is ridiculous.”

A federal judge rejected another church’s similar efforts. Pritzker has said that his order is temporary and church leaders should make keeping parishioners safe a top priority.