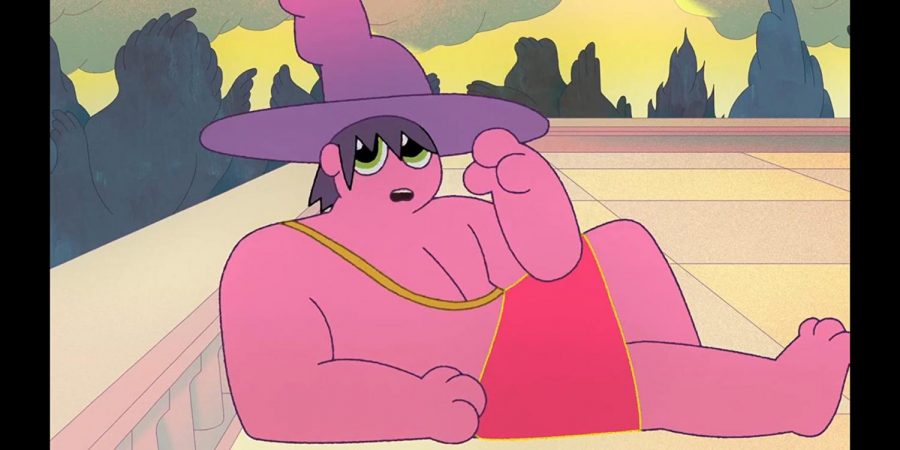 At first glance, “The Midnight Gospel” looks like a show similar to “Adventure Time” or “Ricky and Morty” with an animation style that feels very surreal and psychedelic at times. Once you start watching the show, however, you begin to realize that you are in for a journey of self-reflection and spirituality through thought-provoking and religious discussions of each episode.

Created by Pendleton Ward, the creator of “Adventure Time,” and comedian Duncan Trussell, host of “The Duncan Trussell Family Hour,” the two set off to create a show that both incorporates odd and eccentric animation styles while also deriving real-life discussions from Trussell’s podcast.

The show follows Clancy Gilroy, a pink-skinned “spacecaster,” or video podcaster in space, who travels to different versions of Earth right before they are destroyed by some cataclysmic event, using a forbidden “multiverse simulator.” Clancy visits specific people in these different versions of Earth in various wacky Avatars and asks to interview certain characters for his spacecast named “The Midnight Gospel,”  a podcast that gets sent out in space for the universe to enjoy. The characters in the show he interviews are all people that Duncan Trussell himself has interviewed for his own podcast, with the name of the real interviewee shown in the title card of “Midnight Gospel.”

The show breaks the fourth wall at times with the interviewees accidentally referring to Clancy as “Duncan,” and even splicing some real-life footage of the recording studio. It is this light-hearted banter that adds to the show’s charm, as it frequently acknowledges its own existence as a piece of media.

Even though “Midnight Gospel” has only one season of eight, 30-minute episodes and can seem like a show to binge in a short amount of time, reflection over each episode is vital with the array of themes presented. The show addresses several profound subjects, like death positivity, forgiveness, magic, meditation, drug use, and more, all while presenting it in a creative and light-hearted way, with the help of Trussell’s character, Clancy. Later in the season, though, we see Clancy deviate from going on wacky adventures in the simulator and claiming he has reached enlightenment, to dealing with personal issues he’s faced in his life. We see this in “Mouse of Silver,” the final episode of the season where Clancy comes to terms with the death of his mother. This mirrors Trussell’s own feelings and experiences when he was coping with the death of his mother due to cancer.

Again, while the show presents themes that weigh heavily on some people, the show’s animation and music help add color and playfulness to these serious conversations. This is most notable in “Officers and Wolves” with Anne Lamott and Raghu Markus. Lamott discusses death acceptance and how she has struggled with deaths in her own life and her journey to death positivity and how freeing it is to accept death as an inevitable outcome in life. This discussion occurs while the characters in the show are immobilized on a conveyor belt heading towards a meat grinder in a slaughterhouse run by clowns.

The animation not only adds playfulness to the show’s more serious conversations but also pulls the viewer closer into the themes that are discussed. Some conversations, like the one in “Annihilation of Joy” with Jason Louv, can be tough to digest without any visual aid. In this episode, Clancy visits a prison planet with lost souls that have cut their tongues. Clancy crashes through the prison, unleashing a large scale riot, and gets entangled with a prisoner named Bob, who happens to have a spirit bird named Jason. The themes in this episode revolve around collective consciousness, to which Jason speaks to Clancy about the importance of self-awareness and to accept that all souls are connected and thrive on the belief systems we have set in place. During this discussion, Bob attempts to break out of the prison and murders other inmates or guards, but each time he dies, his “soul” is judged and if it fails to meet certain requirements, Bob is sent back in time to the same moment before he decides to escape. Later in the episode, Bob starts seeing himself in other people, which causes him to act differently. This complements the idea of collective consciousness and helps guide the viewer with what Jason is saying about souls being interconnected with one another.

The music, composed by Joe Wong, adds to the show’s playfulness. Clancy appreciates music and sees it as a healing mechanism, both literally and figuratively. Each episode ends with a unique musical mix, made up of soundbites of the interviews from the show cut up and looped with some sort of beat or musical chords. This ties each episode neatly and on a cheerful note, literally.

This show is definitely a must-watch just based on the conversations had and the different themes that are explored. To really understand the concepts that are addressed, it is essential to give all your attention in the 30-minute span of each episode. The animation may overwhelm you in the first couple of episodes, but the substance in each frame of the animation is carefully constructed to add to the dialogues being had. You may even find yourself re-watching episodes to better understand what is being discussed. If you find the conversations and interviews to be interesting and compelling in their own right, the “Duncan Trussell Family Hour” podcast may be for you, as each interview in “Midnight Gospel” is originally from Trussell’s own podcast.

Catch “Midnight Gospel” on Netflix, and the “Duncan Trussell Family Hour” podcast wherever you get your podcasts. A second season of “Midnight Gospel” has yet to be officially confirmed, although Trussell has said he is interested in exploring the universe he and Ward have created.