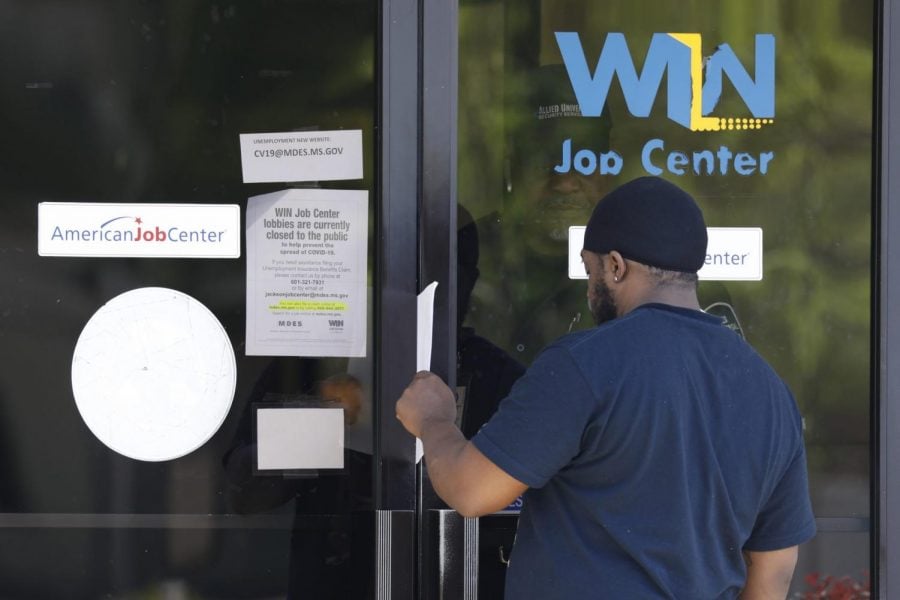 Tyrone Keoton Jr., is handed an unemployment benefit application form by a security guard behind the glass doors of this state WIN Job Center in north Jackson, Miss., Thursday, April 2, 2020. The job centers lobbies are closed statewide to prevent the spread of COVID-19. The agency encourages residents to apply for their benefits on line, however, the system has been stressed by the large numbers of applicants. The local job centers are making paper unemployment applications available and applicants are filling them out and pushing them back through the mail slots or doors as well as they can.

David Mechura spends his shifts at Aldi sanitizing carts and allowing no more than 50 people in the store at one time. He makes sure shoppers are following new guidelines Aldi is practicing in order to keep customers safe.

Mechura, a DePaul senior, has only been working at Aldi for about a month and says his base pay is $14 an hour with an extra $2 an hour until the end of May.

“I feel that my job is ‘essential’ as without all of us, there would be no way for people to buy their food and whatever else they need,” he said. “That being said, I also think that every job is ‘essential’ especially to the person that is relying on that job to bring in money for the family.”

Although Mechura considers his job to be essential, he said if he was approved for unemployment there would be “nothing stopping him from getting money without having to work for it.”

More than 30 million Americans have filed for unemployment since the COVID-19 pandemic broke out in March. When most states issued stay-at-home orders, they closed down nonessential business, leaving many to be furloughed or laid off — and to file for unemployment.

The United States’ unemployment rate increased by 10.3 percentage points to 14.7 percent in April, according to the Bureau of Labor Statistics. This is the largest over-the-month increase in history.

The Coronavirus Aid Relief, and Economic Security (CARES) Act was passed by Congress and signed into law by President Donald Trump on March 27. It provides fast and direct economic assistance for American workers, families, and small businesses while preserving jobs for American industries.

The act includes over $2 trillion for an economic relief package for Americans suffering from the public health and economic impacts of coronavirus. It also includes a weekly increase of $600 for every person who is eligible for unemployment on top of their state benefits.

That means those on unemployment can make anywhere between $2,604 and $5,068 (before taxes) per month depending on what they are approved for.

Mechura could work 40 hours a week at Aldi, making $16 hourly wage, and still not make the minimum that would be received on unemployment.

Many of those who are currently working at remaining essential businesses such as grocery stores or delivery services are still making low wages or state minimum wage. Essential workers face risks like the increased likelihood of exposure to the coronavirus while interacting with customers and packages.

“I think that this was the stupidest thing they could have ever passed or even considered,” Mechura said. “There are already cases of businesses unable to rehire their employees because they are making more money on unemployment than what they were actually making at their job.”

Jose Gonzalez, 21, works at UPS and makes $14 an hour. Despite being “essential,” UPS workers have not seen an increase in their pay since COVID-19 began, but they do have to go into work an hour earlier than normal in order to clean all the stations.

Gonzalez is not able to file for unemployment and although he is making far less working at UPS, he understands that many people need it.

“I don’t have anything against it, considering the fact that there are numerous amounts of families out there who are in need of money to be able to live a stable life, specifically during this pandemic,” he said.

Brian Phelan, an associate professor of economics at DePaul, says there’s no doubt that most of the job loss that’s taking place is amongst the lowest wage workers.

“These are the sectors [leisure, hospitality, retail] that have been hit most and they tend to be, the workers that work there tend to be the lowest wage workers,” he said. “So, those are the types of workers who are least likely to, where the employers are going to fully protect them in the same way that employers of higher paying workers.”

For many essential workers, the liable relationship between employer and employee is what is keeping some at their job.

“Depending upon how important that income is for you, generally having employment – there’s real value in that because you’re maintaining that stable relationship, you might be okay in the short run because of unemployment but unemployment might not be there forever,” Phelan said. “Having that relationship with an employer could be quite valuable to you in six months from now, a year from now whereas people who sort of waited out on the sidelines collecting unemployment may have a much harder time getting a job when unemployment runs out in six months or in a year.”

Phelan said that there is a relationship pertaining to time of unemployment and reintegration into the labor force.

“There is evidence of that when the longer that individuals are unemployed it becomes harder for them to sort of reintegrate into the labor force,” he said.

Even if a current essential worker wanted to leave their job and apply for unemployment, there is little to no chance that they would become eligible for unemployment. According to the National Law Review, generally an employee is disqualified from unemployment benefits if they leave work without good reason, which is disputed by employers.

Minimum wage increases will vary state to state, while unemployment benefits  are constituted by the federal government.

“State governments have to balance their budgets,” Phelan said. “They can’t spend more than they bring in, in taxes. So they’re definitely way more limited in times like these, in terms of how much they can spend.”

It’s unclear if minimum wage will be raised in order to subsidize unemployment benefits.