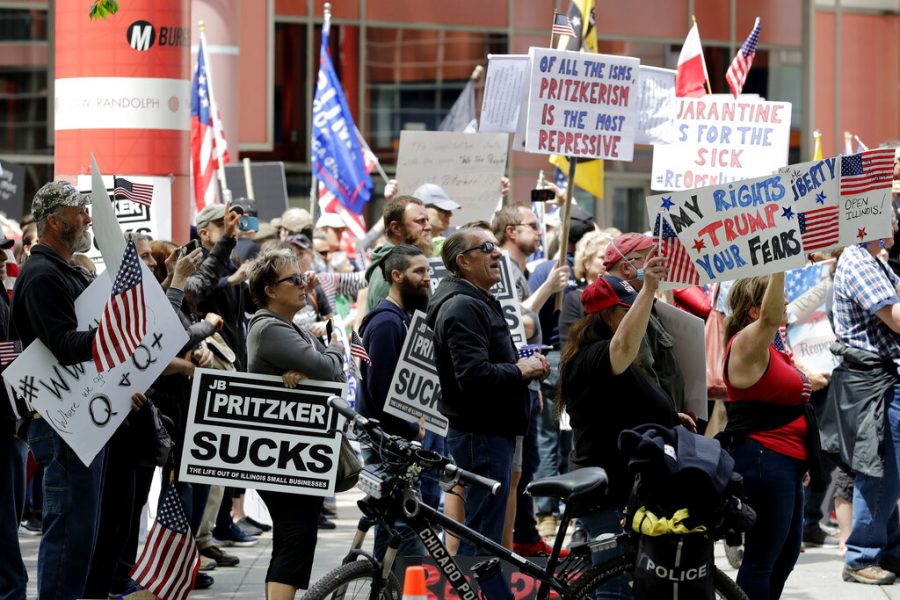 Illinois Gov. J.B. Pritzker has released a five-phase reopening plan for Illinois as states begin to look toward reopening their economies and public spaces as COVID-19 infection rates decrease.

The “Restore Illinois” plan divides the state into four health regions each capable of moving through the phases of the plan independent of other regions. Each phase includes parameters for moving forward or backwards into other phases depending on the progression of infections, hospital usage and available treatments.

According to Pritzker, Illinois is now in phase two of the plan, identified primarily by the stabilization of infection rates and the flattening of hospitalizations and intensive care unit bed usage. Gatherings of 10 people or more and the reopening of retail businesses will commence under phase three, marked by further decline of infection rates and hospitalizations.

All four regions may be able to move into this stage by May 29, Pritzker said.

A return to in-person education, dining and recreation will occur under phase four, with a full reopening of the economy and allowance of large gatherings with phase five. Illinois will only reach this point with the mass availability of testing and treatments.

As Illinois takes a prolonged and cautious approach, other states are moving to reopen soon. This is raising concerns from some experts that they may be reopening too quickly.

“If we skip over the checkpoints in the guidelines to: ‘Open America Again,’ then we risk the danger of multiple outbreaks throughout the country. This will not only result in needless suffering and death, but would actually set us back on our quest to return to normal,” Dr. Anthony Fauci, director of the National Institute of Allergy and Infectious Diseases, said in an interview with The New York Times.

Iowa and Missouri, Illinois’ neighbors, are two of 21 states that did not meet White House and Centers for Disease Control and Prevention criteria before reopening. Their requirements necessitate a decline of Covid-19 cases and deaths over a 14-day period and the ability to treat cases without crisis care before reopening begins.

Officials in some states, such as Georgia Gov. Brian Kemp, have been criticized for reopening businesses and public spaces too quickly. This includes Atlanta Mayor Keisha Lance Bottoms, who has said Georgia’s reopening has been a “massive health experiment,” according to The Atlanta Journal-Constitution.

States have been spurred on by economies increasingly threatened by high unemployment and the permanent closing of businesses. As of May 8, the U.S. unemployment rate has reached 14.7 percent, with more than 20.5 million jobs lost in April.

In total, 29 states have begun to reopen, with another nine states and D.C. scheduled to open in the next week.

The development of a reopening plan in Illinois is a welcome relief to Larmon’s Hair Studio owner Larry Brown. The Chicago shopkeeper has had the hair stylists who work at the studio on his mind since he closed. Many don’t have any other sources of income to support themselves.

“Some are single and living paycheck to paycheck,” Brown said.

While Brown himself has rainy day funds saved up, they won’t last forever. He applied for a small business loan provided through the passing of the federal CARES Act in March, but missed out. He’s since sought out a second round of loans, but says the process is running slow and hasn’t heard back since he applied several weeks ago.

While this time has been hectic and worrying for him, he continues to trust the state and city responses to Covid-19.

“I don’t think they’ll rush it,” Brown said. “If you get sick and you die from it, you won’t be here to work or go to that job you’re so anxious to get back to.”

DePaul University junior Matiah Ninalowo has had to face changes due to the outbreak of Covid-19 as well. She was laid off from her supervising position in Navy Pier’s Pier Park division at the onset of Illinois’ stay-at-home order in March and had to file for unemployment. She now hopes she can return to the pier once restrictions are lifted.

“Hopefully I can go back there,” Ninalowo said. “I don’t want to have to look for another job right now.”

Pritzker has come under criticism from some state lawmakers and business groups for how the plan handles reopening. Businesses adjusting to restrictions aimed at combating Covid-19 have had to deal with a range of concerns, from paying their landlords and employees without revenue, to a heavy drop in traffic, to even having enough funds on hand to reopen once restrictions are lifted.

In a call to action released Thursday, the Illinois Restaurant Association said the plan “underestimates the restaurant industry’s ability to reopen and operate safely with enhanced public health measures in place.”

Illinois House of Representatives Minority Leader Jim Durkin has said the plan gives the governor too much power for too long, according to the Chicago Tribune, saying, “I did not abdicate nor relinquish my elected responsibilities to the executive branch.”

Other lawmakers, such as Illinois House of Representatives Speaker Michael Madigan, said while he’s eager to “return to normalcy,” plans for reopening Illinois and the state legislature “must have the health and safety of all those involved as a top priority.”

In Illinois and other states that have remained closed, protesters and local officials have organized against restrictions.

For several weeks demonstrators in Michigan have called for an end to the state’s stay-at-home order, protesting in the streets surrounding the Michigan Capitol and, at one point, entering the building as lawmakers debated an extension of the order.

California Gov. Gavin Newsom has been accused of upholding “tyranny” in the state by some protesters. The Orange County Republican Party said Newsom had partaken in “targeted harassment” after he closed only that county’s beaches.

Newsom, working from a similar, yet shortened, reopening plan as Pritzker, has allowed some businesses, offices, and retail spaces to reopen.

As Illinois and other states look to reopen, medical professionals such as University of Chicago nurse Chelanja Armstrong advise people to continue practicing social distancing and hand hygiene. Objects people may interact with in public every day, such as seats and standing poles on public transportation and door handles, may harbor Covid-19 on surfaces for more than 48 hours, she said.

“Because of coronavirus, we can’t see or smell it or touch it,” Armstrong said. “People can be asymptomatic, having no symptoms but being a carrier.”

The “Restore Illinois” plan may continue into the near future. A vaccine treating Covid-19 may not be available for more than a year.