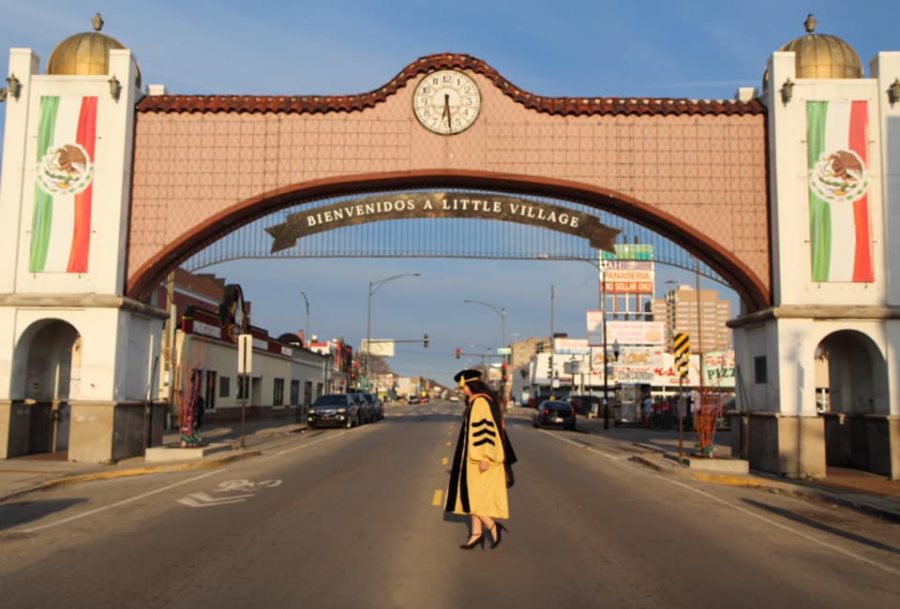 Ana Laura Saavedra poses for a photograph in Little Village

Standing under the Little Village arch in her cap and gown, Ana Laura Saavedra realized that she beat the odds. The 28-year-old daughter of Mexican immigrants just received her doctorate as a Pediatric Nurse Practitioner from Johns Hopkins University, making her part of the less than 1 percent of latinos to obtain that degree.

“You will have people that will expect you to drop out of high school or because you’re a woman you are going to get pregnant,” she said. “Just the fact that you beat those statistics, I just felt my community just made me want to work harder. If it wasn’t for my parents being immigrants and being low income and living in Little Village, I don’t think I would know what it’s like to have resilience, determination and ambition.”

Saavedra was raised in Chicago’s neighborhood of Little Village by her parents who immigrated from Guanajuato, Mexico. She grew up having to fight the academic stigma formed around the Latino community.

Being Latina, a female, and a first generation college student, Saavedra said the feeling is surreal.

“It feels unreal, the fact that my parents came from another country just to provide something better for their family and the fact that I grew up in Little Village where a lot of my neighbors dropped out of high school or joined gangs,” Saavedra said. “Not having a lot of professionals as role models, thinking about all that just seems unrealistic.”

After graduating from Georgetown University in Washington, D.C with a Bachelors in Science of Nursing and after witnessing the health disparity found within the Latino community, Saavedra said she decided to go back to school and pursue a higher education.

Because she had no mentor or professional figure to look up to, Saavedra wants to be the professional role model that she never had for future generations in Little Village.

While attending Georgetown and Johns Hopkins, Saavedra said that at times she felt out of place from her surroundings and as if she wasn’t going to make it after realizing the education disparity she faced growing up.

“A lot of the challenges were feeling like I didn’t belong, because there weren’t many Latinos in those universities; I felt out of place a lot of the time,” Saavedra said.

“Sometimes I felt like I couldn’t do it, I realized how although my community tried to provide me the best education that they could from public school it was not the best compared to other schools my classmates went to,” she added.

Saavedra experienced self doubt from herself and from others around her. But it was her parents’ hard work that drove her to beat the statistics and not become another number.

“There were people who would tell my dad ‘She’s not going to make it far; children of immigrants don’t make it far,’” Saavedra said. “Because of my parents I was determined that I wanted to do this, and this is the only way out to not fall into those same statistics that Latinos are in.”

Catalina Saavedra, mother of Ana Laura Saavedra, said that when she immigrated to the States she thought about the future of her kids and wanted to provide a better education for them.

“One thinks of the future for their family so you can help and support your kids in what they want to do with their life,” said Catalina. “More than anything I want them to prosper. I couldn’t receive an education but that’s why I came to this country so my family can prosper.”

Catalina said she feels nothing but pride towards her daughter’s academic accomplishment.

“I feel [very] proud because [Ana Laura] is a daughter of Latino parents who came to this country undocumented without an education,” Catalina said. “It’s a huge satisfaction that my daughter was able to reach. It’s an honor for our family.”

Saavedra shared her graduation pictures underneath Little Village’s arch and went viral on Facebook. Her pictures have received over 5,000 likes and over 2,000  shares. For parents Saavedra’s pictures are serving as inspiration for other first generation students.

Maribel Alejandra Santin-Zendejas, resident of Gurnee and mother of three, commented on Saavedra’s picture “Mexicana Chingona!!! Congratulations ! You make your parents and your community feel very proud of you. I will show your pictures to my daughter who will be starting high school soon to show her that she can do it too!”

Now back in Chicago, Saveedra hopes to utilize her education and title to work in a clinic in Little Village upon completing her practitioner.

Saavedra feels like her upbringing in Little Village played a part in her accomplishments. She feels like it’s her role as a professional to serve as a role model for others.

“I feel like Little Village is my identity,” Saavedra said.  “I am Mexican-American and 26th St. is known for being predominantly Latino and made of immigrants. Every time I say I’m from Little Village I’m proud because that is where I come from and that is what I relate to.”

Her message to the youth of Little Village is that one’s surroundings do not determine one’s potential.

“I believe that everyone can make it if they put their mind and work, sometimes we might have to work 10 times harder than others but that’s okay because at least we earned it and at least we know what it is to work hard.”