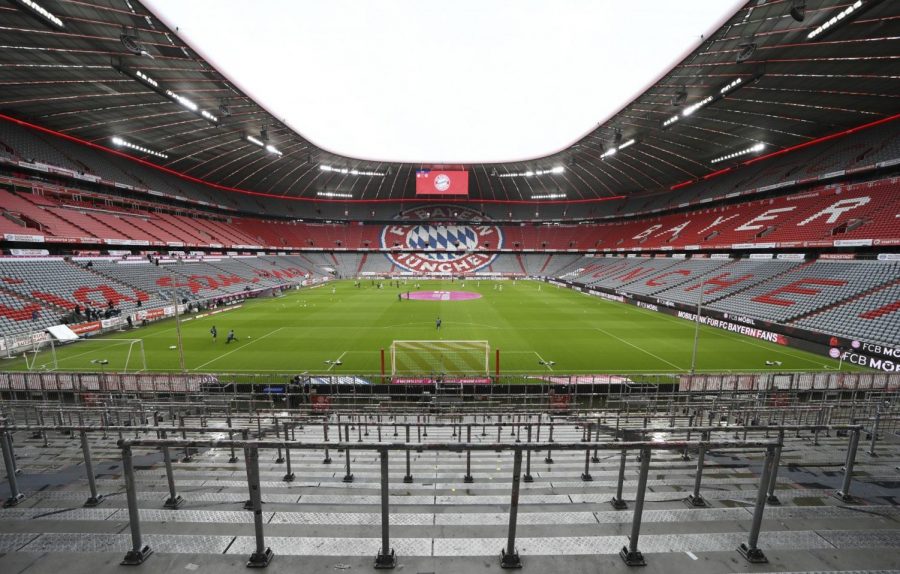 The empty Allianz Arena is seen prior to the German Bundesliga soccer match between Bayern Munich and Eintracht Frankfurt in Munich, Germany, Saturday, May 23, 2020.

UEFA convened a telephone call featuring its major stakeholders back on March 14 to plan European football’s response to the coronavirus.

The governing body’s 55 member associations, the EU Club Association, European Leagues and the international players’ union Fifpro were all represented. Rescheduling flagship tournaments like Euro 2020, the Champions League and also the Europa League were key matters to handle, along with domestic scheduling concerns.

Here, we glance at the key decisions taken and what the ramifications will be.

While pushing Euro 2020 back 12 months looks as if the sensible option, UEFA’s announcement on club competitions appears fraught with potential difficulties.

The Premier League, LaLiga, Serie A and the Bundelsliga are suspended until the start of April with further delays expected, while Ligue 1 is on hiatus until further notice.

The motivation of all involved is fairly clear, given a season stretching beyond June 30 is problematic because that is the date when player contracts typically expire. Keeping the 2019-20 season in an indefinite state of limbo would also bring associated financial pressures and uncertainty for several clubs.

Despite the softening of the situation and the measures taken to combat the same, some supporters around the world seem to be unhappy with the state of the events. Phil Howarth — an international student from Birmingham, who is completing his graduation in Sports Science at University of Illinois at Chicago — has a completely different perspective.

“I think it is a completely bizarre proposition to set deadlines given the current conditions,” Howarth said. “There are still 2,000-plus people dying every single day in the United Kingdom and the league is worried to complete the set matches before June 30? Just imagine the number of matches per week. What is the use of exhausting the players and draining them completely by playing twice the amount of matches they are meant to play?

“The risk of injuries and the prospect of burning out is completely neglected by the Football Association just so that they don’t lose financial support from their investors. The FA is just exploiting the entire situation and expecting the players to magically perform consistently and give it all out so that they can cramp up all the money they can for the remaining season. I’m sick of it.”

Howarth, who has been a lifelong Aston Villa fan states that he has been supporting soccer for more than 16 years now.

“My father was a massive Villa fan and I had to continue the legacy once he passed away,” he said. “For me, Villa is something really dear to me because more than anything, it kind of connects me to my father and the fond memories we have shared when he was alive. Even though Villa is at the bottom of the barrel and is at the risk of relegation, I still follow them religiously and love them passionately because you stick with your team through thick and thin.”

Howarth says that the ideal solution is to be considerate and pick a decision which is in the interest of everyone.

“Just void the league,” Howarth said. “Majority of the teams of the Premier league are in favor of this decision. Just cancel the league like they did with Italy’s Serie A. This is the time the FA can redeem themselves by acting as an example. They have screwed the teams and the players for a long time in this country and I believe they should, for once, uphold the interests of the players rather than their treasure chest. Call the league void and start fresh in September or whenever this pandemic ends. We need to collectively forget that the 19/20 season was nothing but a bad dream and we ought to sleep through it. I think that would be the best possible scenario for the majority of the teams.”

Howarth also states that the big teams in the league should come together and pressurize the FA on making a consolidated decision for the future as the autocracy and using the players for their own personal interest has got to stop.

French Open Postponed For the First Time amid Coronavirus Threat

Within the on-going coronavirus pandemic the clay court major, the French Open 2020 has become the primary slam to be rescheduled. The Parisian major was purported to be held from May 24 to June 7, 2020, but with the increasing toll in Europe, it’ll now happen from Sept. 20 to Oct. 4, 2020.

Roland Garros has taken under consideration the general public health crisis connected with COVID-19. To make sure the protection of everyone involved in making the foremost successful, the authorities came up with the postponement of the French Open 2020.

“We have made a difficult yet brave decision during this unprecedented situation, which has evolved greatly since last weekend. We are acting responsibly. And must work together within the fight to make sure everybody’s health and safety,” said Bernard Giudicelli, president of the French Tennis Federation. The French Open is going to be the last slam of the year 2020.

On Sept. 13, 2020, the US Open will conclude. Within seven days time, the tennis professionals are going to be making their transition from the fast hard-court of Flushing Meadows US Open to slow clay-courts of Roland Garros French Open.

In a nutshell, once the globe is liberated from the coronavirus pandemic and  the tennis tour resumes, the players are going to be having a troublesome time by flying from one corner of the globe to a different one.

“We haven’t had any intention of canceling the event,” – the organizers of French Open 2020 said a few days ago. “There are still some months to travel before the event. For the past few days, we’ve got no intention of canceling the event. The French Tennis Federation will, as is its responsibility, follow the government’s lead when making any such decisions,” French Open organizers stated.

Sticking to their words, the French major remains within the air this year.

Srinivas Suresh, a graduate student from Northwestern University has been following the sport for a while. He expresses his deep despondency about the change of schedule.

“I was really excited for the French Open this year,” Suresh said. “I have been playing and following tennis professionally for more than six years now and the fact that French Open is being postponed for the first time ever, strikes a nerve.”

“For me, Tennis is everything. This is my second year in this country and the first thing I did when I came to Chicago was to become a member of a Tennis club. It is indeed a sad situation to know that my favorite event in the whole circuit is being postponed, and what makes it even worse is the probability of the entire event getting canceled. That will be a huge blow to the whole Tennis circuit.”

The implications of this new date are massive. First, the US Open 2020 is scheduled only one week before the beginning of Roland Garros. Furthermore, it’ll clash with many other hardcourt tournaments usually staged during that point. Hence, the short transition from hard courts and clay courts would be difficult for the players.

Suresh, an international student from India, is pursuing his masters in mechanical engineering. When asked who did he look up to the most in Tennis, he had a pretty amusing answer.

“I know, I’m stating this third or probably the fourth time in this interview, but Rafael Nadal is my God. I have never seen and will most probably never see any player with an inch perfect technique in every shot blended with the rusty graft of arrogance each time the ball hits the racquet. I was indeed looking forward to witnessing Nadal post his injury. His knee had really given him a bad time all throughout 2019, but after the operation he was looking rampant. His comeback has been long anticipated by fans all around the world, but now with all this, it seems that waiting for a few more months is our only option.”

The verdict of rescheduling the event after the US Open surprised many tennis players. However, the tournament organizers reportedly kept the 19-time sweep winner, Rafael Nadal within the loop. Reports also suggest that the organizers tried to contact other players. However, it’s still unclear if they were ready to speak to them.