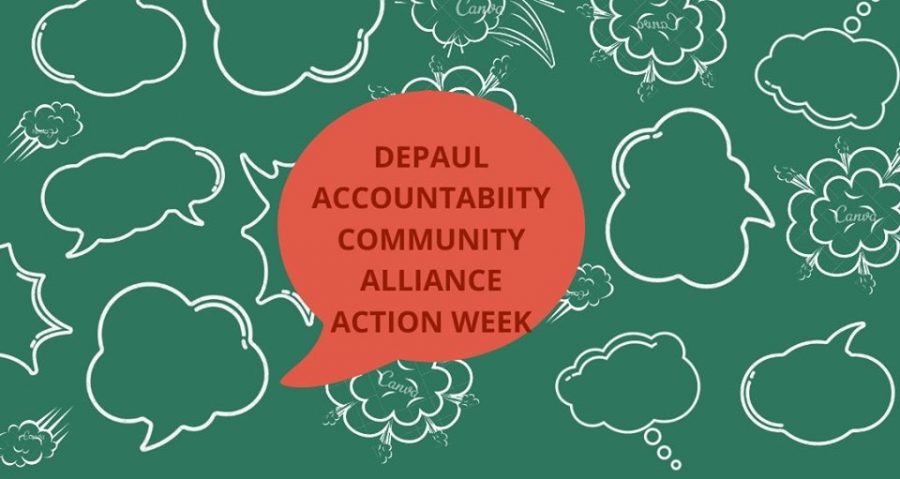 After DePaul announced in March that the university would be moving to remote classes for the remainder of Spring Quarter, students and community members formed the DePaul Community Accountability Alliance in an effort to hold the university accountable to provide resources for its students, employees and faculty.

On their Facebook and Instagram accounts, the alliance states that they are a group of students “calling for accountability and transparency from DePaul University.” Although the alliance has a wide range of priorities, their focus right now is to ensure that Chartwells employees, the dining workers contracted by DePaul, are paid.

Hello! We are the DePaul Community Accountability Alliance. We are a group of students calling for accountability and transparency from DePaul. As you may know, the University has decided to lay-off and withhold pay to the Chartwells and Dining Workers. This leaves workers unable to afford daily necessities and rent. Are you willing to join us in our social media action days to motivate awknowledgement and change from DePaul? We would love your support in our Action Week coming up in the next few days. The schedule will be posted tomorrow! Click the link in our bio to sign up 💖

Earlier today, the alliance announced steps for its action week which will be taking place from May 27 to May 29.

The action week has three phases.

The first phase, to take place Wednesday, calls on students to share and repost videos compiled by Unite Here! Local 1, the union representing Chartwells. These videos highlight DePaul’s laid off Chartwells employees who have not received any kind of payment.

The second phase is alumni outreach — calling on students to reach out to alumni and donors to inform them that Chartwells employees are going without pay with scripts provided by the alliance.

“They may not seem like they’re a significant person but as soon as you get 10 or 20 to stop giving to DePaul, that’s when DePaul starts getting nervous,” said organizer Kelly Garcia on alumni outreach.

Organizers hope that extensive student and community member involvement will convey what they feel to be the injustice of Chartwells workers’ unemployment.

“The thing that’s unique about this week is that it’s born out of the response from the university, which is that they’re unwilling to work with us,” Garcia said. “What we’re doing is that now we’re turning to our donors and our alumni — we’re working to mobilize all parts of our community.”

The third phase is a student call-in and tag-blast which asks students to call the DePaul representatives as well as tag alumni on social media.

Scripts and templates will also be available for students to call their DePaul representatives to demand that Chartwells workers be paid.

Here is our schedule for our Action Week (May 27-29)! We will be posting guides and scripts for each day’s action, hashtags to use and accounts to tag! Please DM us with any questions💖

Although the organizers stress that contact with any alumnus is beneficial, in their promotional materials, they ask for students to tag and message Joe Keery. The 2014 Theatre School alumnus and star in Netflix’s “Stranger Things” is set to speak at this year’s virtual commencement.

Above all, organizers within the alliance want students and community members to know that the alliance is fighting for the rights of members of the DePaul community, which extends beyond students and faculty to employees such as the Chartwells workers.

“They deserve paid leave and the ability to know they’re being covered by their employer,” said organizer Grace Siegelman. “We want to distance ourselves as a student org because it’s impacting so many people who don’t live on campus and are outside of the student body.”

Although the alliance is young, its organizers have no intention of dissipating.

“We seek to advocate for all DePaul community members — students, faculty, and employees alike — well into the future,” said organizer Carolina Aceves. Our current focus, however, is to ensure that dining workers are paid, as they have gone nearly over three months without any sort of payment from DePaul and that is simply inexcusable.”

Throughout their action week and beyond, the alliance plans to continue trying to make contact with the offices of the interim provost, president and executive vice president.

“I think they felt they gave us a hard answer and that we would accept it and retreat but obviously that’s not a case,” Siegelman said.