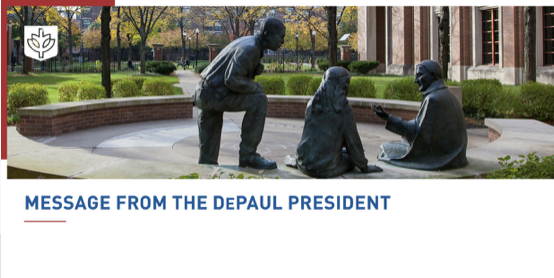 DePaul University President Gabriel Esteban misnamed Eric Garner when listing victims of violence in a statement released to students via email regarding the university’s response to George Floyd’s death and subsequent protests.

“From Trayvon Martin to Eric Ferguson to Ahmaud Arbery and Breonna Taylor, as well as earlier this week in Central Park, we have seen too many deaths and incidents of harassment perpetrated against the African American community,” the statement read.

Eric Ferguson is not a real person. Eric Garner was killed by the New York Police Department in 2014. That same year, Michael Brown was killed in Ferguson, Missouri by police.

“We apologize for the error,” said university spokesperson Carol Hughes when asked for comment by The DePaulia. “University Marketing and Communications, which proofread the text, deeply regret their mistake.”

Students expressed disappointment and frustration about the error.

“I am constantly disappointed, yet not surprised, at the ineptitude and carelessness of the DePaul faculty,” said DePaul junior Phoebe Nerem.

DePaul junior Elyse Flannery said the error was “distressing” given the sensitivity of the message.

“I have a feeling that this was not entirely written by President Esteban, so the fact that an entire team missed this error is a bit embarrassing,” Flannery said. “Ferguson was the name of the city in Missouri where Mike Brown was killed, so I’m not sure who thought Ferguson was a surname. Honestly, this was a fact that someone can check on Google in 10 to 20 seconds and find the correct last name of Eric Garner, so even though the error was small, it makes DePaul faculty seem lazy and apathetic to the situation.”

“I think it was DePaul’s way of being politically ‘woke’ and the president didn’t do his research on the names of people who’ve died at the hands of law enforcement,” DePaul junior Katie Kostelic said. “I think he had the right idea but it was executed poorly.”

The university quickly sent another email issuing a correction saying they “deeply regret the mistake and apologize for the duplicate message.” The correction email did not describe the error that was made.

The President’s message has been updated to indicate that Eric Garner was the name of the man killed.