Op-ed: The Nation’s Grief… Our Response? 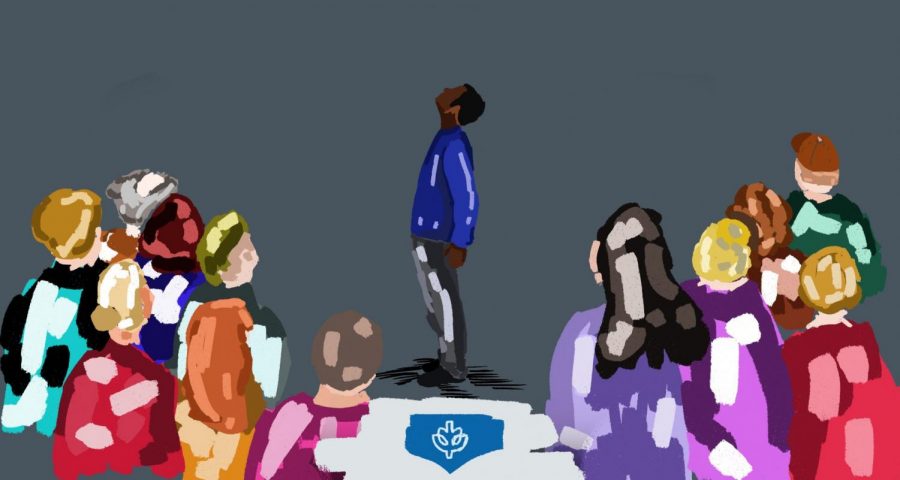 Those who have not experienced American racism may have found a degree of solace in President Esteban’s letter to the university community — “The nation’s grief… and our response.” As an African American faculty who writes and teaches on race, I did not.

For me, it was indicative of the way that racism is broached in our nation and at DePaul. Administrators readily focus on acts of overt racism that happen elsewhere, yet rarely if ever acknowledge the second, and perhaps most virulent face of racism — that which is embedded in institutional practices and behavior.

The racism you don’t see is that racism that is experienced every single day — it’s systemic. It’s the racism that determines who’s a part of the family and who is not — who’s promoted and who is not, and who’s voice is viewed as hostile and aggressive.

The late Terry Smith, distinguished professor of law, is DePaul’s George Floyd. He was brought up on Faculty Handbook charges of “a pattern of extreme intimidation and aggression toward colleagues.” Although he sued and settled out of court, the impact was no less stifling than that experienced by George Floyd as the Minnesota police officer pressed his knee into his neck.

To think otherwise is to be dangerously naive. But, it’s always easy to believe that a black man has done something extraordinarily wrong and therefore deserves the harshest punishment.

I have witnessed all manner of disruptive behavior from white colleagues at DePaul that never even resulted in a slap on the wrist. We need to stop being shocked by the egregious and overt acts of racism, and pay closer attention to the more subtle acts of racism that are embedded in the way we perceive and respond to one another.

There is a double standard at play that many white administrators, faculty, and staff are either unaware of or simply don’t care about.  It’s this double standard that gives rise to the racism we see in the street. It doesn’t occur in a vacuum. It begins in the hearts of those who don’t quite see people of color as they see themselves.

Esteban’s open letter encourages us to “pledge to work for change, to seek reform and to hold each other accountable.” For faculty of color, this is an occupational hazard. Holding white people accountable for racism comes at a hefty cost. And although whites are frequently in a position to use their privilege in service to anti-racism, they rarely do. There is privilege in sitting idly by, but it makes one complicit in the very system that is condemned.

There are those who will view the recent hiring of people of color as proof positive of DePaul’s anti-racism. This point of view is as misleading as the myth of blind justice. For one, it belies the fact that they are qualified — and that their appointments are not acts of benevolence; and secondly, it remains to be seen how they will be treated once they arrive.

It is a fact: DePaul likes its faculty of color to be silent on issues of race. Those of us who are not, are labeled as firebrands, or not considered team players who are worthy of promotion. Well, guess what? That’s institutional racism. It’s similar to the manner in which whites incessantly police the response that people of color adopt toward racism. Even when racism is evident, people of color are expected to stay silent or protest peacefully, when in fact, there’s nothing peaceable about American racism.

There is a lengthy roll call of administrators and faculty of color at DePaul who have either been forced to sue, been pushed out, or have left due to institutional racism. I know faculty of color who never experienced stress-related illnesses until coming to DePaul.  That’s the invisible cost that we rarely see, or even when confronted with it, our colleagues refuse to believe.

“The nation’s grief… our response.” For me, that is the question.