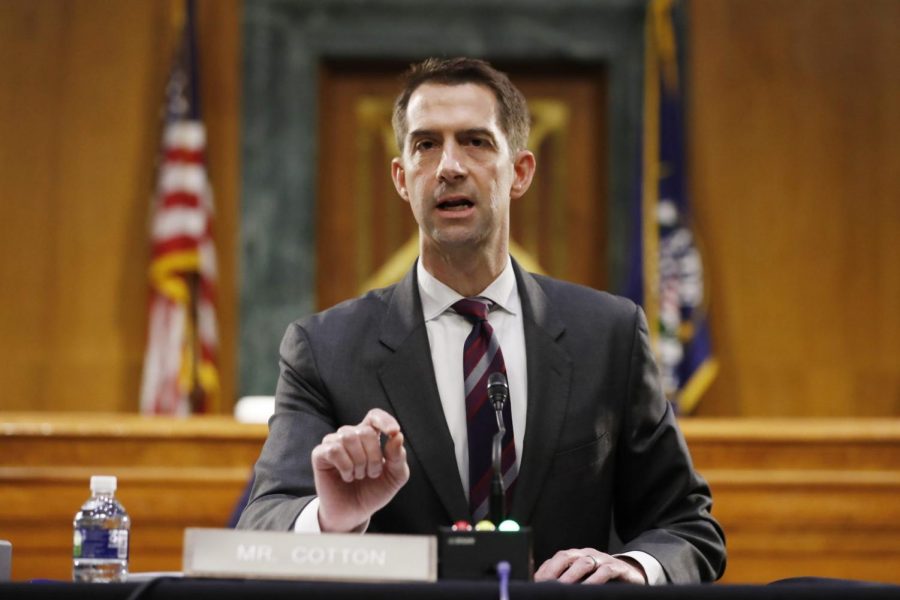 In this May 5, 2020, file photo Sen. Tom Cotton, R-Ark., speaks during a Senate Intelligence Committee nomination hearing for Rep. John Ratcliffe, R-Texas, on Capitol Hill in Washington. Cotton has risen to the ranks of potential 2024 Republican presidential contenders by making all the right enemies. Now, the Arkansas lawmaker is making more by lining up behind President Donald Trump’s law and order recipe for controlling civic unrest.

WASHINGTON (AP) — Freshman Sen. Tom Cotton has risen to the ranks of potential 2024 Republican presidential contenders by making all the right enemies. By lining up behind President Donald Trump’s law-and-order recipe for controlling civic unrest, he’s making even more.

“One thing above all else will restore order to our streets: an overwhelming show of force to disperse, detain and ultimately deter lawbreakers,” the 43-year-old Arkansan wrote this week in a New York Times opinion column.

That infuriated Democrats and liberals, whom he swiped at by writing that protests rocking cities are “carnivals for the thrill-seeking rich as well as other criminal elements.” For good measure, he tweeted Thursday that “liberal arts professors” won’t have to “live with the consequences of chaos and destruction.”

Later Thursday, after the Times released a statement saying Cotton’s essay did not meet its standards, he accused it of “surrendering to the mindless woke mob.”

Taciturn as he strides through Capitol hallways, seldom acknowledging reporters’ questions, Cotton is known for tough stances on issues that thrill Trump’s conservative supporters. He’s been a hard-liner on immigration, Iran and most recently China, including accusing that country of developing the coronavirus in a secret lab. He’s edged away from that charge but asserts he was among the first to warn of “the looming pandemic.”

Cotton’s office declined to make him available for this article. But a person close to him, who spoke on condition of anonymity to discuss the lawmaker’s thinking, said Cotton would consider serving in the Cabinet for a second Trump term if he’s reelected in November and running for president himself in 2024.

An Army combat veteran and Harvard Law School graduate, Cotton’s ambition is no surprise in Washington or Arkansas. Notice has been taken of his unusually high profile for a first-term senator and his frequent appearances on the network of choice for Trump and his followers.

“Cotton is out there every night, and he’s winning the Fox GOP primary for 2024,” said Scott Reed, senior political strategist for the U.S. Chamber of Commerce.

“Everything he’s doing looks like what a very ambitious person who wants to run for president at the next available time does,” said GOP consultant Liz Mair, who says she’s “not a fan.”

Cotton was on Fox again Thursday, saying the outrage about his call for physically overpowering protesters “exposes the hypocrisy of all these woke progressives” who can’t tolerate opinions they don’t like.

And with some protests over police killings of black men veering into violence in New York and elsewhere, Cotton reprised his role as one of Trump’s chief defenders in Congress.

He disputed Defense Secretary Mark Esper’s comment that this week’s turbulence didn’t create an urgent need to use troops in cities, saying that was Trump’s call. And to former Defense Secretary Jim Mattis’ stunning assertion that Trump was dividing the country and violating the Constitution, Cotton said, “He’s wrong on this one.”

None of that went over well with Democrats.

“I’m appalled that anyone, let alone a member of the Senate Armed Services Committee, would advocate for the use of military force to silence dissent,” said Sen. Richard Blumenthal, D-Conn., a fellow member of that panel.

Representing a state that has turned increasingly Republican in recent years, Cotton faces reelection in November with no Democratic opponent. He plans to use some time helping GOP Senate candidates including Bill Haggerty in Tennessee and Joni Ernst in Iowa, which holds each presidential cycle’s first caucuses.

“China is the greatest threat to America’s security and our values,” the announcer says, accusing China of running concentration camps and stealing millions of American jobs. “Career politician Joe Biden is weak on China.”

As the spot ends, it shows a split screen of Cotton wearing his combat fatigues and Trump in a Make America Great Again hat. “Senator Cotton is standing with President Trump to take on China and keep America great,” the announcer says.

“Sen. Cotton has taken the Trump approach of playing to the fears and darkest, most negative things that appeal to Trump supporters,” said Michael John Gray, chairman of the Arkansas Democratic Party. “His ambition’s been bigger than Arkansas from the moment he sought a seat in the House.”

Cotton served six years in the Army in the early 2000s, leading a combat platoon in Iraq and being deployed to Afghanistan. He also spent time in the Old Guard, whose tall, ramrod-straight members keep watch over the Tomb of Unknown Soldier at Arlington National Cemetery just outside Washington.

Cotton grew up on his family’s farm and attended Harvard University and its law school.

While a student there in 1996, he wrote an article in the school’s paper, The Harvard Crimson, lauding the political skills of a fellow Arkansan: then-President Bill Clinton, whom he called “the most sincere campaigner of our time.” He also praised the intelligence of Hillary Clinton, later to become Trump’s vanquished Democratic presidential rival, saying Bill Clinton “would have never made it past county commissioner” without her.

But what Cotton described as Bill Clinton’s “easy-going, affable” style has not seemed to rub off on Cotton’s manner in the Washington.

“He’s definitely accumulated the right national security and foreign policy experience to put him on track to run in 2024,” said Ron Bonjean, a GOP political consultant and former top congressional aide. He added: “He’s not a backslapper. He’s a really serious guy.”

Cotton served one House term before being elected to the Senate in 2014, defeating Democratic Sen. Mark Pryor. Within weeks of becoming a senator, he incensed Democrats.

He drafted an open letter to Iranian leaders, signed by 46 GOP colleagues, warning that a nuclear deal that President Barack Obama was seeking would not be binding and could be dismantled by the next president.