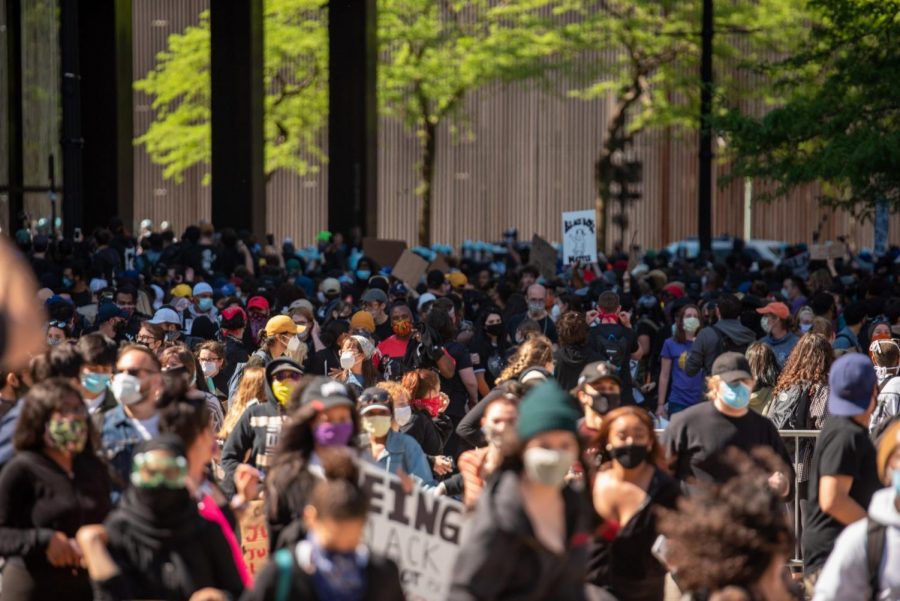 NEW YORK (AP) — With New York City poised to reopen after a more than two-month coronavirus shutdown, officials on Sunday lifted a curfew that was in place amid protests of police brutality and racial injustice. But they also urged that demonstrators be tested for COVID-19.

“Get a test. Get a test,” New York Gov. Andrew Cuomo told people who have been participating in rallies and marches in memory of George Floyd.

He said the state would open 15 testing sites dedicated to protesters so they can get results quickly.

“I would act as if you were exposed, and I would tell people you are interacting with, assume I am positive for the virus,” Cuomo added.

The call is similar to those made in Seattle, San Francisco and Atlanta following massive demonstrations, with free testing for protesters.

New York has been the epicenter of the U.S. outbreak, with black communities hit especially hard.

The Rev. Brandon Watts of Epiphany Church in Brooklyn, was mindful of the pandemic while organizing a “Pray & Protest” march with several other churches. He mandated that protesters wear masks, and he came with boxes of them. He also asked the group to try to maintain social distancing but acknowledged “it’s kind of hard in a protest.”

Attendees also were offered free coronavirus tests at one church.

“COVID-19 hit the inner city harder than anybody else,” Watts said. “And so we have to be very careful. We’re the only ones in a pandemic within a pandemic.”

Brooklyn resident Celeste Douglas attended her third protest in the past week and said she’ll continue until legislation is passed on budgets for police and education.

“I want to tell my children when they ask when this stuff started to change, I want to tell them I was a part of it,” Douglas said, acknowledging being nervous in a crowd during a pandemic but also planning to be tested.

Catherine Corien, a 60-year-old dental hygienist in Brooklyn, said fear of catching the virus prevented her from participating until Sunday. She finally ventured out and stood near the back, wearing a mask and keeping some distance from other protesters.

“I’m very concerned, but at the same time, a lot of people, if they are like me and decided to stay home, nothing would have happened,” she said. “I’m very proud of the people that came out.”

New York City prepared to enter its first phase of reopening after virus shutdowns. Up to 400,000 people are expected to head back to the workplace Monday, with many using a subway system that most New Yorkers have avoided since March because of crowding.

Mayor Bill de Blasio lifted the city’s 8 p.m. curfew imposed for the Floyd protests. The police pulled back on enforcing the curfew Saturday as thousands turned out.

“Last night was the best by far,” de Blasio said. “We had the biggest number of protesters, the fewest arrests, the fewest problems and that convinced me it was time for the curfew to go away. I have no intention of bringing it back.”

Cities imposed curfews amid last week’s spasms of arson, assaults and smash-and-grab raids on businesses. Recent U.S. protests have been overwhelmingly peaceful, as were rallies held around the globe.

Floyd’s body arrived in Texas for a third and final memorial service, said Houston Police Chief Art Acevedo. A viewing is planned for Monday in Houston, followed by a service and burial Tuesday in suburban Pearland.

The 46-year-old out-of-work bouncer died after a Minneapolis police officer pressed his knee into his neck for several minutes even after he stopped responding. His death has drawn new attention to the treatment of African Americans by police and the criminal justice system.

In Washington, D.C., National Guard troops from South Carolina were seen checking out of their hotel Sunday shortly before President Donald Trump tweeted he was giving the order to withdraw them from the nation’s capital.

The D.C. mayor had called on Trump last week to withdraw outside forces amid days of largely peaceful rallies after he ordered guard troops to “dominate the streets.

At the newly renamed Black Lives Matter Plaza near the White House, protesters posed with the street sign and the yellow block lettering painted on the pavement by the city. As ice cream truck jingles mixed with protest chats, the district’s Metropolitan Police Department patrolled in place of federal law enforcement officers and National Guard troops.

On Saturday, a small group of demonstrators toppled a statue of a Confederate general in Richmond, Virginia, the former capital of the Confederacy. Virginia Gov. Ralph Northam has pledged to remove a statue of Gen. Robert E. Lee after days of Floyd protests.

Protesters in Bristol, England , tore down a statue of Edward Colston, a 17th century slave trader, and pushed it into the harbor of the port city in southwestern England.

In other protests outside the U.S.:

— A crowd estimated at 10,000, many in face masks, filled a square in front of the main courthouse in Brussels, holding white roses and signs decrying racism. “You think you are tired of hearing about racism? We are tired of experiencing it,” read one placard held up by a young black woman.

— In Milan, Italy, a few thousand people rallied against racism outside the central train station, many of them African migrants or the children of migrants who want to see reforms making it easier to receive citizenship. One held a sign saying, “I Fight For My Kids.”

— Thousands massed outside the gleaming new U.S. Embassy in London, where student Darcy Bourne said the demonstration was about “more than just George Floyd, more than just America, but racism all around the world.”

— Thousands wearing masks against the virus gathered peacefully in Spain’s main cities, including at the U.S. Embassy in Madrid, to denounce racism and chant: “Police murderers!” and “No justice, no peace!” A protest also was held in central Barcelona.