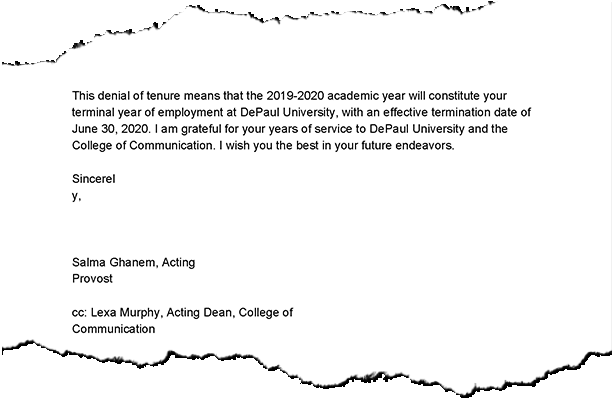 Dr. Lisa Calvente, a communication professor at DePaul, is suing the university on the grounds on racial discrimination, retaliation and breach of contract. Following an atypical tenure denial, her contract was terminated, and her last day at DePaul will be June 30.

Calvente sent a mass email to students on May 29 explaining that she would not be returning to DePaul, as her tenure application and appeal were denied. She wrote in the email that since 2015, her colleagues in the College of Communication have admonished her for challenging her students in her classroom, particularly regarding her teachings on race. She also indicated that she experienced multiple discriminatory aggressions from her senior colleagues in the College.

She further claimed in multiple documents obtained by The DePaulia that both her tenure application and appeal were unfairly evaluated by top administrators at DePaul, including Interim Provost Salma Ghanem, President A. Gabriel Esteban and the College’s interim dean, Alexandra Murphy.

Both the University Board of Promotion and Tenure and the Faculty Appeals Board voted in favor of Calvente’s tenure. The Appeals Board found Calvente was unfairly evaluated at “multiple points.” Regarding one of those points — Calvente’s 2015 formal review — the Board wrote it was “disturbed” by the near “willful distortion” of the facts presented in the review to reach the decision to deny tenure to Calvente.

The lawsuit was filed on June 8 against both the university and Ghanem. A source close to the story said that the College of Communication was not sued because they are a “separate entity.”

Calvente is seeking compensation for “significant abuses” by both Ghanem and the university. She claims in the suit that those abuses were in retaliation for her complaints about racism within the College of Communication and motivated by her race.

Calvente’s attorney, Jerry Bramwell, stated he believes that Calvente was a victim of retaliation from the university, after making complaints about racism within the College of Communication.

“Given that her file was at least as strong as a professor who withdrew her complaint about racism in the College of Communication, and given that the UBPT said that Dr. Calvente should have been awarded tenure, we do not understand how DePaul could deny tenure to Dr. Calvente unless retaliation was at play,” he said in an email.

Bramwell also represented former DePaul law professor Terry Smith, who left the university after filing a civil rights suit against it which claimed he “suffered significant abuses” in retaliation for his outspokenness on racial issues within the law school.

The lawsuit was filed with the United States District Court in the Northern District of Illinois. Calvente is requesting a trial by jury.