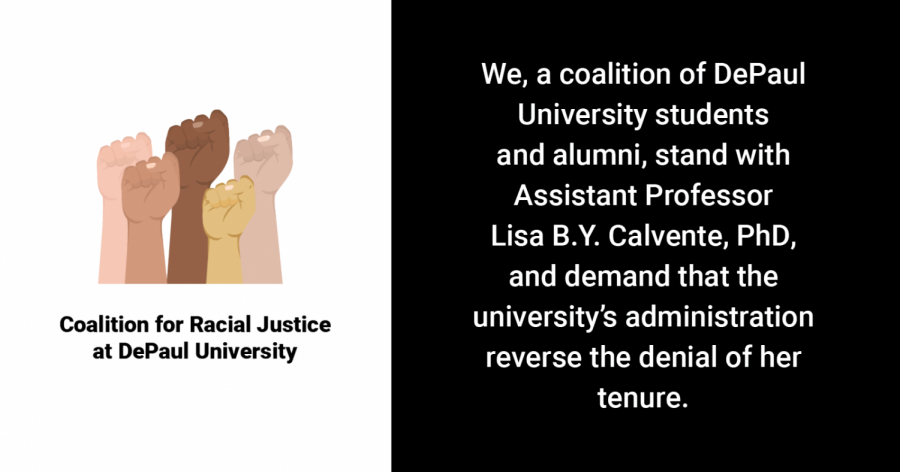 Courtesy of the Coalition for Racial Justice

After DePaul professor Dr. Lisa Calvente shocked the student body with a May 29 mass email detailing her tenure denial at DePaul, student and alumni took matters into their own hands, starting a new group aimed at helping Calvente receive tenure and changing the culture at DePaul.

The Coalition for Racial Justice formed on June 2 in response to Calvente’s denial of tenure, which she claims was based on discrimination, racism and sexism.

After reaching out over email to one another, students made a Facebook group to discuss how to proceed. That page led to a formal Zoom call that would be the start of a group that hopes to change the culture at DePaul for students and faculty to come.

Gabriel Charles Tyler, assistant director of communications at the Center for Community Investment, graduated from DePaul in 2014. He was a former student of Calvente’s and said he was dumbfounded by her denial.

“DePaul as a university says it has values and principles that it abides to, among those being a commitment to institutional diversity, equity and inclusion,” Tyler said. “But what is happening now to Dr. Calvente is educational malpractice and it shows that the university and its administration is not living up to the things they say are the foundation of the institution.”

On June 9, Tyler tweeted that members of the Coalition for Racial Justice are calling for DePaul to reverse their tenure decision. They sent a letter to President A. Gabriel Esteban June 9, and after receiving no reply, followed up June 10. Tyler said they still have not heard back.

Along with the letter, they sent the link to their statement.

“We, a coalition of DePaul University students and alumni, stand with Assistant Professor Lisa B.Y. Calvente, PhD and demand that the university’s administration reverse the denial of her tenure,” the statement reads.

The statement also says that DePaul is not a representation of Chicago — but it should be.

Lauren Gonzalez, a senior at DePaul, said the group has made demands to DePaul about “increasing transparency, having more student oversight and also having a faculty that reflects the diversity of the city.”

Tyler said Calvente had a “profound impact” on her students.

Evangeline Semark, DePaul class of 2014 and lead communications specialist of corporate engagement at Northwestern University, is a former student who believes Calvente’s strong teaching ability is important for everyday life.

“The Coalition is a testament to what so many of us have learned within Dr. Calvente’s classrooms: that we – her current and former students – are agents for change who possess the critical knowledge and skills to question what is thought to be known and to engage in day-to-day acts of resistance,” Semark said.

Surdeep Singh Chauhan, a junior at DePaul, was a former student of Calvente’s and a founding member of the Coalition for Racial Justice. Chauhan felt that an explanation was needed for how DePaul allegedly manipulated student responses and used them against Calvente.

“Once we got the news, it was just a blow that a lot of us weren’t ready for,” he said. “We were now seeing that she had become a victim of the very same discrimination, bigotry, sexism and just racist practices at DePaul herself.”

Many students in the group spoke out against what they claim to be obvious differences in the treatment of faculty based on race, with some mentioning underlying tones of white supremacy within the culture at DePaul.

Tyler said removing Calvente and denying her tenure will result in the absence of courses that “examine Blackness and racism,” given her areas of expertise.

“Dr. Calvente is the only senior faculty member of color within the College of Communications at DePaul, as well as the only tenure line faculty member in the college that specializes in the Black diaspora, anti-Black and anti-Brown racism, and coloniality and decolonization,” Tyler said.

“I believe that with the tragic murder of George Floyd and Breonna Taylor, that in real time, we are witnessing, kind of like the veil being pulled from America, and we’re really seeing how white supremacy has its roots in every institution in this country,” Chauhan said.

“As a coalition of DePaul students and alumni committed to racial justice, we need DePaul to name its legacy of upholding white supremacy and acknowledge the harm that its anti-Black racism has caused for generations of People of Color and especially Black, Brown and Indigenous students, alumni, staff and faculty,” Semark said.

The Coalition for Racial Justice has many long-term goals in the works and points out that this is only the start of the change they want to see.

Abigail Escatel, DePaul graduate student, said while long-term goals are pending, transparency and accountability from the administration will be key.

“It’s been really clear to us that there is a lack of transparency in terms of all the procedural violations that Calvente’s experienced, which are really personal to us,” Escatel said.

The Coalition said it intends to continue asking the university to make substantive changes.

“In our response to the administration, the Coalition focused on profound and meaningful change to current policies, practices, procedures and the academic program that we feel have played a key role in upholding white supremacy and perpetuating systemic racism within the College of Communication and at DePaul,” Semark said.

UPDATE 6/10/20: This story has been updated to indicate that a statement was sent by the Coalition to President A. Gabriel Esteban once yesterday and another time this morning.