Japan falls into recession amid COVID-19 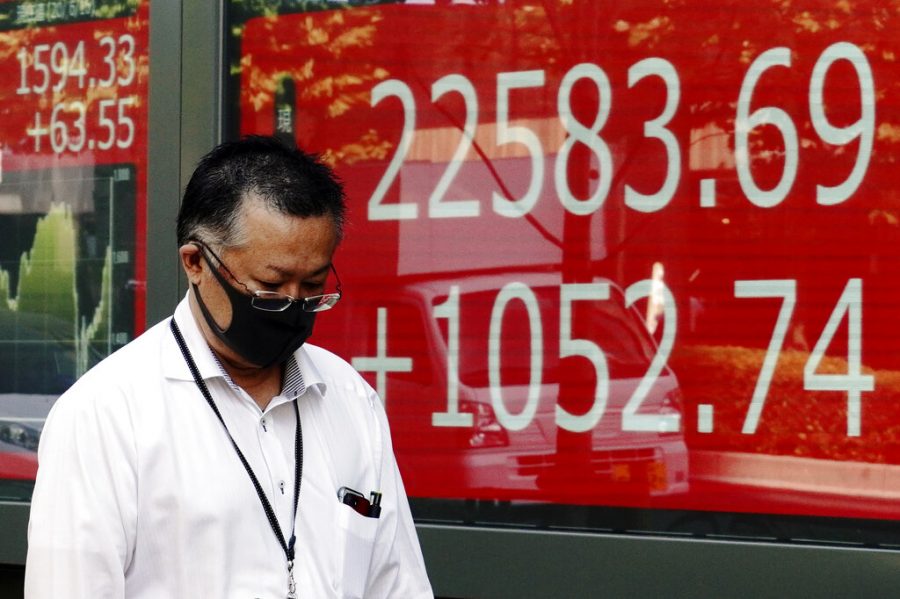 A man walks past an electronic stock board showing Japan's Nikkei 225 index at a securities firm in Tokyo, Tuesday, June 16, 2020. Asian shares have tracked a rally on Wall Street spurred by the U.S. Federal Reserve's latest promise to support markets battered by the coronavirus pandemic. Benchmarks in Japan, South Korea, Australia and China all rose in early Tuesday trading. (AP Photo/Eugene Hoshiko)

COVID-19 has taken a toll on economies around the world as most businesses came to a halt. Consequently, Japan has now fallen into a recession, which has shed a light on the history of these economies.

Japan has the third largest GDP, following the U.S. and China, but as of May 17, the country declared a recession. This comes after two quarters of negative consecutive growth.

Yet, even though the pandemic was a historical downfall for most economies, it’s a symptom for what Japan has experienced for decades.

“Their [Japan’s] economic stagnation has been going on for several ‘lost decades’ due to aging workforce and related shrinking domestic market. The heavy welfare burden of its aging population worsens its economic outlook,” said Kathryn Ibata-Arens, a Vincent DePaul professor of political science at DePaul University.

Currently, the median age population of Japan is 48 years old, making it the oldest of any country. This puts a strain on the economy due to the workforce losing steam.

According to the World Economic Forum, almost a third of its population is above the age of 65 years old, two years older than the current retirement age of 63. Because the country is aging at a rapid rate, its population is shrinking as well. This caused Prime Minister Shinzo Abe to implement Abenomics in 2012, a plan to revitalize Japan’s economy after 20 years of deflation, while keeping fiscal discipline.

In 2013, a big step in Abenomics was executed as the Bank of Japan would buy ¥7 trillion of government bonds every month with electronically created money to bring back demand and increase wages and prices. This momentum saw bare growth and fluctuations in the GDP, but this momentum ended by the October-December quarter of 2019 as the U.S-China trade war and lack of global demand hurt Japanese exports.

“[With] Japan buying government bonds, Bank of Japan (BoJ)’s balance sheet size rose from about 40 percent of GDP in 2013 and reached about 104 percent of GDP at the beginning of 2020. However, this so-called Abenomics did not deliver the hope they had back in 2013, with the economy still struggling to gain momentum,” said Jaejoon Woo, an associate professor of economics at DePaul University and associate editor of the International Economic Journal.

Aside from a struggling economy, Japan is sitting in debt of 250% of its GDP, the highest in the world.

However, this isn’t new for Japan.

In the 1970s, the economy began to take off, and in the late 1980s, it became the envy of the world. The Harvard Business Review said that the model was to be emulated because of its industrial policy, management techniques and product engineering, yet this came crashing down by 1990 as inflation rates soared from real-estate.

This followed into the “Lost Decade”which included 10 years of ongoing stagnation. The 2000s saw some improvement, yet 2009 and 2011 endured negative growth. Even though bare improvement came in the following years, perfection is not always the result after a recession.

“The end of a recession does not necessarily mean a good economic recovery; the last US recession officially ended in 2009, but unemployment stayed high, and wage increases paltry, until just a couple of years ago,” said Animesh Ghoshal, an emeritus economics professor at DePaul.

This is what he predicts what could happen after the pandemic. For 2020, the GDP experienced a growth of -5.16 percent, but in 2021 is expected to rebound by 3.01 percent. Even though economies around the world are going to experience some growth by 2021, Ghoshal said that Japan’s model won’t experience similar growth like Canada, the U.S. and Britain because of its aging population.

He explained how the shrinking labor force makes the supply side diminish as well as a significant amount of people saving for retirement, which decreases demand. However, this comes with an eerie silver lining. As the population shrinks over time, a higher GDP per capita will arise, improving the quality of living.

Yet, the pandemic is still like no other recession seen before.

“This recession is different than any previous one, in that it was caused deliberately, as governments all over the world shut down economic activity. That makes it harder to predict when it might end,” Ghoshal said.

With that, Ghoshal predicted general worldwide outcomes that could arise after the pandemic.

“I expect to see three major changes in the world economy,” Ghoshal said.

First, countries will be more protected and barriers to international trade will strengthen, which is a bad effect. In addition, small businesses may continue to go out, which paves way for large firms to become more powerful. Yet, multinational firms will change their supply chains to get materials from closer to home. This is good in terms of security, but bad with cost.

“After months of online ordering, people may not go back to their previous habits of visiting retail stores, restaurants, etc,” Ghoshal said.

As much work had to be conducted on a software platform during the pandemic, it has played a role in what the workforce could look like in the future. Japan was already using automation as it would help with the labor shortage. The country is also well-known for its production in motor vehicles and electronic equipment, hence Japan’s use of technology was already underway. This could be one of the benefits that has risen from this ordeal, but it’s likely too early to tell.

“In the meantime, there will be winners and losers in the process. Overall, past technological revolution brought the creative destruction, and in the end, led growth, not depression, as loss of jobs can be offset by the job creation elsewhere,” Woo said.

This summer, Tokyo was supposed to host the Olympic Games, but it’s now postponed until 2021. Woo said that Japan assumed that the games would fare well with the economy, while spending a lot as well.

Even though Japan has dealt with economic hardships over the years, Woo said that the country could still remain the third largest economy in the world, but this might be overtaken by younger nations.

“We know that in the long run, India and other economies may overtake Japan, given their relative early stages of economic development, relatively young population and potential for further growth,” Woo said.

Some of Japan’s younger competitors are Brazil, Indonesia and Nigeria as they have median ages that are far below 48 years old. However, Woo also predicted if North and South Korea ever achieve unification, then their economy will be a strong rival for Japan as well as the United Kingdom and France as well as the population. Unified Korea would have a population of 75 million, which continues to grow, and Japan has 126 million, being on the decline. Though Woo, this won’t be the case right now.

“At this point, it is unlikely a peaceful reunification on Korean peninsula,” Woo said.

Correction: A previous version of this story listed Kathryn Ibata-Arens’ last name as”Ahrens.” The story has since been updated to reflect the correct spelling.