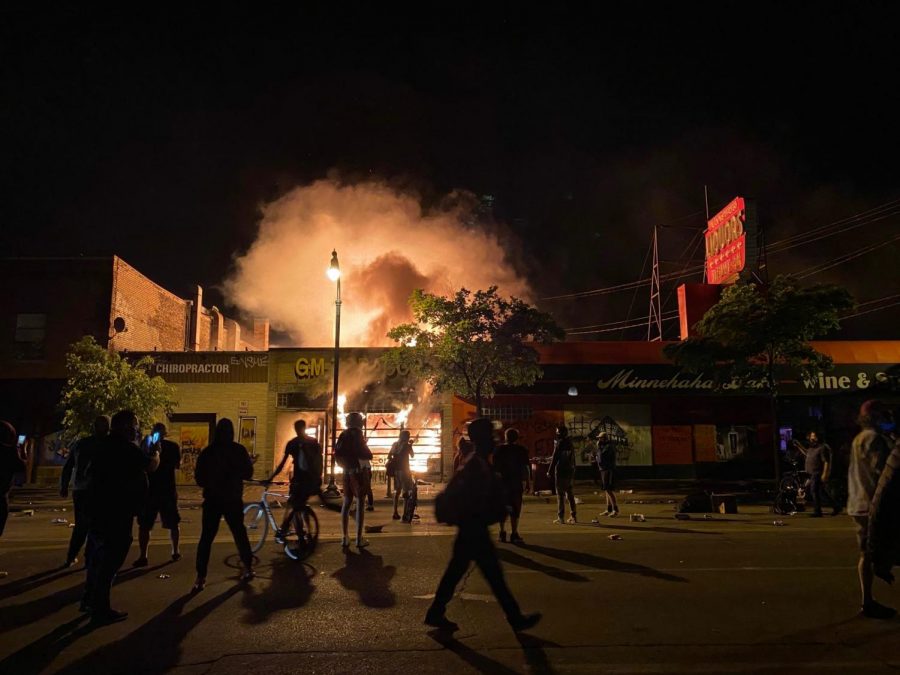 Protesters march across Minneapolis on Thursday May 28 to demand justice in the killing of George Floyd.

The United States of America is experiencing one of the most painful civil disruptions in its history. Just as the country was recovering from the menacing threat of coronavirus and was reinstitutionalizing its economy, the entire country has come together to mourn and protest against the brutal death of George Floyd in Minneapolis.

The incident, alongside the deaths of Ahmaud Abery in Georgia and Breonna Taylor in Kentucky, has kickstarted a protest movement against police brutality and the constant racism by officers toward  African American citizens. The protest, which began as a local event in Minneapolis, soon took root and spread across all 50 states of the country. These protests have severely hampered the country’s economic return to normalcy.

The U.S. economy isn’t in the best condition, as a result of COVID-19. The level of unemployment is almost edging towards the figures during the Great Depression. More than 100,000 citizens have lost their lives during the ongoing pandemic. These huge scale protests and putting its major cities in flames is going to accelerate the already spiraling economy.

According to an Associated Press report, at least 4,400 people were arrested over the weekend of June 1 across the entire country. Additionally, there have also been six states and 13 cities that have declared a state of emergency and the National Guard have been called for service in 23 states, including the capital. The mayors of 26 cities across 16 states have also imposed a curfew on the advice of the Federal Emergency Management Agency. Chicago Mayor Lori Lightfoot imposed a citywide curfew from May 30 but did not consider calling the National Guard.

With Presidential elections around the corner, a significant dip in the economy alongside disconsolate citizens is the last thing the government would wish for. The global financial markets are focusing more closely than ever on the growing conflicts between the U.S. and China, and the current unrest would just be more alarming for investors to venture their funds in an unstable country.

Most of the economists in the country were expecting a punching return in the third quarter, following an estimated 30-40 percent decline in the GDP growth in the second quarter. The country, which suffered significant economic distress in the second quarter due to the pandemic, was looking for a striking comeback to compensate for the semiannual loss. But it is looking extremely unfathomable to meet that goal.

However, things haven’t been all bad in the market.

“The events on the ground rarely seem to affect the activity on the Big Board,” said Daniel Kohn, an investment banker at RBC capital. “Tuesday’s market saw a rapid increase in the S&P 500 by 38 percent from its base. In fact, this period has been the greatest 50-day rally in the history of the S&P 500.”

“It’s very disheartening to see the stock market rising while there are people who protest against the things which hold such gravitas in society. Again, on Wednesday when the expectation was of a significant plunge, the S&P 500 was up by another one percent. I guess that is how heartless and insensitive this market has become.” Kohn added.

This is not the first time Wall Street has been indifferent to unprecedented situations. For instance, on November 23, 1963, a day after John F Kennedy’s assassination, the S&P 500 went down by 2.8 percent, but the impact was short-lived and the market regained all its losses within two days. In fact, the annual gain at the end of that year was estimated to be 19 percent. Similarly, during the Vietnam war, the market remained flat towards the end of 1964 with around 20 percent annual gain, excluding the dividend.

Unfortunately, it is still extremely early to take a sigh of relief. Premature opening of the shops and Memorial Day celebrations were a significant component of the spike in COVID-19 cases. The protests brought people together in large numbers, and while it did unite people to fight a common cause, it also increased the chances of this pandemic spreading further. It is difficult for protestors to effectively social distance as they march shoulder-to-shoulder down city thoroughfares. In the videos of the protests taken, many if not most of the demonstrators appeared to be wearing masks.

The first wave saw a 34 percent decline in the S&P 500 and nearly reduced the global economic growth by 2 percent a month. Several factors, like the withdrawal from WHO, constant tension with China, civil unrest and dipping economy due to COVID-19 have made the U.S. a dangerous place for investors in recent times.

John Smith, a professor who teaches behavioral finance at Northwestern University, said the looting in protests could be an economic detriment for the country and its citizens.

“The looters have been preying upon everything,” Smith said. “Small businesses who have been shut for almost three months now will not open in the fear of vandalism. These small institutions constitute a major backbone of our economy in general, and halting their revenue will only hamper our economy in a cruel way.”

Smith says that people indulging in looting do not understand the long term effects of the market.

“In a capitalistic market, the entire looting will eventually be compensated by all of us,” Smith said. “These major chains which are being robbed will only get their money from our own pockets. Yes, they will incur some loss, but an innocent protestor or a professional at a job is at an even bigger loss because eventually, he will have to pay for the looted commodities through taxes. It is more complex than enjoying free goods”.

The Congressional Budget Office projects that real GDP in the fourth quarter of 2020 will be down 5.6 percent from the year-earlier quarter. Any disruptions, such as protests that linger for weeks and months or find new life going into the November presidential election, will be an added depressant to growth.

The CBO had already marked down its official nominal growth estimates for 2020 to 2030 in May by a cumulative $15.7 trillion, or 5.3 percent, compared with its January projections as a result of the pandemic-related shutdown. In inflation-adjusted terms, the cumulative loss for the decade would be $7.9 trillion, or 3 percent, versus pre-pandemic forecasts.