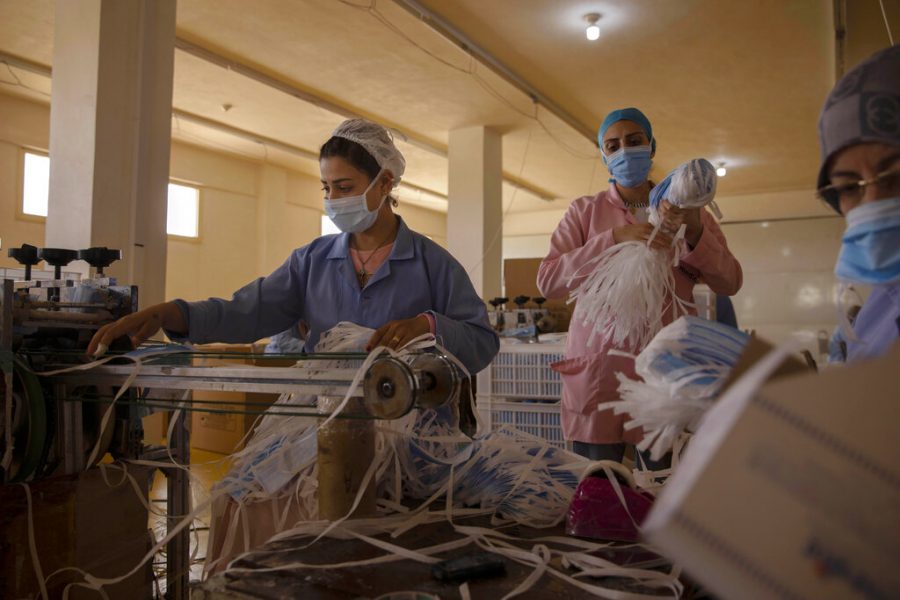 Women working at Medic Egypt for Medical Clothes company make protective face masks to be used to help curb the spread of the coronavirus at a factory in Menoufiya, Egypt, Saturday, June 6, 2020. Egypt has officially ordered its people to wear face masks in public and private transportation, inside government business and offices as it is easing the partial lockdown imposed. Prime Minister Mustafa Madbouly has said violators would be fined as the country has seen a jump of daily reported infections in the past week. (AP Photo/Nariman El-Mofty)

It’s all-but-certain that the end of the COVID-19 pandemic will bring the beginning of an economic recession. But experts say that this one is different: women will be disproportionately affected.

Women made up 55 percent of the 20.5 million jobs lost in April, according to the Bureau of Labor statistics. The unemployment rate for women was at 15 percent compared to 13 percent for men.

Non-white women were particularly affected. Unemployment rates of Black women in April was at 16.4 percent and 20.2 percent for Hispanic women.

This is inconsistent with the Great Recession of 2008, where men were more affected with a 2.5 percent lead on unemployment in 2009.

But the difference doesn’t have to do with men working more than women. Brian Phelan, an associate professor of economics at DePaul said that women’s labor force participation is not much below men’s — a difference of about 10 to 20 percent participation of prime working-age workers. The biggest difference lies in who works where.

“If you want to look at the Great Recession, the biggest area that was hit was the housing industry and the construction sector and the construction, just is, as you know, largely dominated by men in terms of overall employment,” Phelan said. “…There’s still quite a bit of occupational segregation; men and women do work in generally very different jobs.”

Phelan said he thinks this recession will fundamentally change the way the labor force is allocated across sectors.

“What’s different a little bit about this recession, I think, is that it’s not just that businesses will change the way that they make things; it’s also that consumer preferences are really going to change in terms of what individuals want to spend their money on, the types of services that they’re going to demand,” he said.

Before COVID-19 shutdowns, women held more payroll jobs than men — they held 50.04 percent of jobs in December, according to a report by the Bureau of Labor Statistics.

However, these gains aren’t necessarily indicative of women faring better economically. DePaul Women and Gender Studies professor Heather Montes-Ireland noted that this growth and market participation has come largely through undervalued and underpaid service sector jobs like childcare and nursing — jobs that are lower wage, part-time and without benefits.

These jobs are necessary and important, Montes-Ireland said, but women are seen as a cheap labor pool.

A study by Brookings Metropolitan Policy Program showed that in 2019, women accounted for 54 percent of low-wage workers, but 48 percent of the workforce.

“It’s sort of this catch-22 where in the U.S. today there is a system where women are responsible for a huge majority of unpaid labor in our society… [as well as] wage labor,” she said.

She added that there’s often a mentality that women have a partner at home so employers feel justified in only hiring women part-time or without benefits.

The COVID-19 pandemic has offered an interesting juxtaposition, though, as women are also more highly employed in the health care sector.

“It’s kind of a weird careered mix right now; so on one level, you know, there’s incredible demand for certain types of health services — people who are sick with coronavirus — but at the same time, if you look at the job, reports have actually seen quite a bit of a decrease in employment in the health care sector because people are not getting elective surgeries. People are avoiding health care,” Phelan said.

Still, many frontline workers are women. According to a 2019 report by the U.S. Census Bureau, women make up 76 percent of health care jobs and 85 percent of nursing, where they are on the front lines of patient interaction.

“There’s a big push for us to sort of celebrate the frontline workers within this pandemic and so many of those workers are concentrated within things like nursing which are largely feminized fields in the profession,” Montes-Ireland said.

Montes-Ireland said solutions should be driven by changing and rewriting the policy to benefit women of color. Social welfare laws that exist now don’t benefit the most vulnerable, largely immigrant women and working class women of color.

“Our system of social welfare today is so, so deeply racist and deeply oppressive,” she said. “We need to look again at the social welfare system we have which has also been pretty much obliterated.”

Changing this policy will be necessary to bounce back.

“We have to understand what it will take to support the American working poverty class or we will not have a recovery like the kind of recovery we had from the Great Recession — that [recovery] was due to the very working women of color who are working two or three jobs right now for minimum wage… we owe our recovery to that very population.”

At DePaul, Montes-Ireland notes that most adjunct faculty are women and are also the most disposable.

Still, Phelan said low wage workers will still be much more affected than any college educated worker, regardless of gender.

“I mean, maybe college students or people are sort of filling in to get a little extra money until they start their career, picking up a couple extra hours, but these are largely real low wage jobs too, where we’re seeing the job loss,” he said.

“I think it does disproportionately affect women, not just in terms of those that are already in the labor force, but also the hiring process, to the extent that women are going into sort of the more traditional, female dominated occupations, because those are going to be the ones that that aren’t necessarily hiring,” Phelan said.

But experts suggest women might still come out on top. Historically, they have been able to adjust to times of labor hardships more quickly than men.

“There’s a lot of evidence that women have been really adaptable in the labor force,” he said. “They haven’t been discouraged as a group, they haven’t been afraid to move into new jobs and to seek retraining when necessary, and so it certainly speaks to their adaptability as a group.”