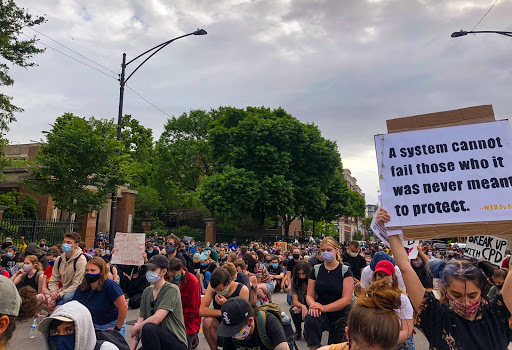 At a June protest calling for DePaul to divest from the Chicago Police Department, protesters take a knee on Fullerton Ave for eight minutes and 45 seconds in honor of George Floyd.

On Wednesday, June 10, DePaul students took the streets of the Lincoln Park campus to demand the university divest from CPD.

Students flowed into the campus’ quad, right off Fullerton Avenue at 5 p.m. according to the Facebook event created by two student organizations, the DePaul Socialists and Students Against Incarceration.

Among divestment from CPD, the students’ list of demands includes the implementation of the Ban the Box campaign, payment of the university’s laid off dining workers, the support of the Boycott, Divestment, Sanctions (BDS) movement and elimination of ICE on campus.

Included in the demand to divest from CPD, the protestors call DePaul to discontinue its current agreement with Chicago’s Federal Order of Police. This agreement gives FOP members a 25 percent discount on tuition, as well as a 75 percent tuition reimbursement from the City of Chicago. If members receive an “A” they are eligible for up a 100 percent reimbursement on courses.

Although the demands are wide-ranging, organizers argue that they are all connected to the Black Lives Matter movement.

The protest’s organizers, who make up a coalition of leftist organizations called the “Left Alliance,” said they want to demonstrate, through the demands, the connection between Black oppression to the struggles of other groups.

“Yes so it’s not necessarily Black lives on face value, but the black struggle is inherently intertwined with other struggles, it’s so interconnected we can’t just reform it, we must divest,” said Fae R. “Since we see how interconnected they are, this shows that the Black Lives Matter movement needs to be a multiracial project, everyone needs to show up.”

Lesser-known yet a cornerstone to the demands, the Ban the Box campaign has been a consistent battle for students.

The campaign was derived from a grassroots organization called All of Us or None started in 2004, which advocates for formerly and currently incarcerated people and their families.

Ban the Box calls for the question on the common application, which students use to apply to colleges, that asks if students have any former convictions, be removed from DePaul’s application.

This comes after other universities including in New York and North Park University in Chicago, have already taken the step to remove the question.

Grace Siegelman is a rising senior at DePaul and a member of the student organization, Students Against Incarceration, which has spearheaded the Ban the Box campaign on campus.

She said that the question deters two-thirds of applicants who have been formerly convicted of even finishing the application.

“We know Black people are incarcerated five times as much as white people in this country,” Siegelman said. “This question is directly impacting people of color.”

As for integrating the campaign into the list of demands, Siegelman said the organizers wanted to include it not only because of the question’s disproportionate impact on Black people but because of how quickly it can be done.

“This is a direct action step that DePaul can take right away,” Siegelman said.

Chris Cook is a rising sophomore at DePaul. When organizers offered the mic to Black students to share their stories, he took the opportunity to give his own reasons for protesting.

Cook’s words resonate with many, including the protest’s organizers who said they see the University of Minnesota ending their contract with MPD as something central to this movement.

“When universities cut ties with the police then that city council feels the pressure to divest from police,” said Fae R.

Although the protest was centered around DePaul, students were not the only ones in attendance.

After sending Facebook event by a friend, Darrius Thomas made the trip from Roseland up to Lincoln Park for the protest.

He said he wanted to be a part of the movement.

“It kinda made me tear up a bit when I got off the train at Fullerton and saw everyone just taking a knee,” Thomas said. “Majority of the faces White, that made me feel like okay, I’m not in this alone.”

Correction: A previous version of this story incorrectly used the word “application,” when intending to use the word “applicant. The story has since been updated to reflect the correct word.