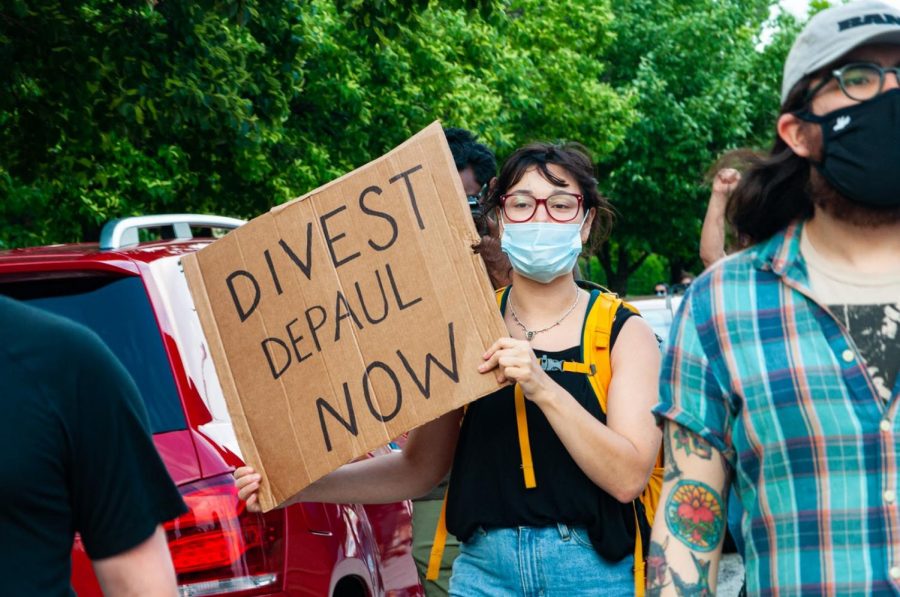 A DePaul student holds a sign at a June protest, calling for DePaul to divest from the Fraternal Order of Police.

Interim Provost Salma Ghanem released a response to calls for the university to end it’s affiliation with the Chicago Police Department (CPD) on Monday via Newsline.

The response, published under Newsline’s “Campus and Community” section, comes after an on-campus protest demanding the university cut ties with both CPD and the Fraternal Order of Police (FOP), among other concerns.

The statement was sent via email from Newsline, although some students remarked they did not receive the message.

“I actually didn’t get the email, I found out from some tweets,” said DePaul junior Sydnie Martin.

d*pauls response to the calls to cut ties with cpd ,,,, & the fact this was clustered into the newsline instead of a formal university wide email ,,,, pic.twitter.com/CMzvkIa32N

Some students were confused by not receiving an email, given the large response garnered in protest of the relationship.

“I thought [the lack of promotion] was kind of strange given that so many students were awaiting a response from the administration,” said DePaul senior Allison Terry.

When asked for the university’s response to the recent protests in addition to why the response was not promoted like previous statements, university spokesperson Russell Dorn stated that the university had “nothing further to add” in terms of a comment.

“We believe the message in Newsline Daily this morning speaks for itself,” Dorn said in an email.

“There is nothing much to add,” she said via email. “Newsline was selected as it is the outlet we use for disseminating information to the entire university community.”

The statement includes excerpts from an email Ghanem said she received from a student in the Police Officer student cohort.

“I hope and pray that these students get to know our stories and our side,” the statement reads. “Besides wearing the uniform I proudly wear, I will always be a Latina, who was once a high school dropout, young mother, and here I am today proudly serving and protecting our city.”

Near the statement’s end, Ghanem remarks that allowing education to CPD officers aligns with Vincentian Values. Students have criticized this approach, saying that Ghanem failed to adequately address the concerns of students.

“We are well aware that some cops are moms or can be nice people but that’s not the problem,” said DePaul senior Fae Robertson. “The problem is that cops have a legal monopoly on violence and that power was founded in slave catching and strike breaking and to this day, at any moment, cops can abuse that power and get away with it. Our university has programs that can “professionalize” them abusing that power.”

Ghanem stated in the response that offering education to CPD officers aligns with Vincentian Values.

“Our university is dedicated to providing students an education imbued with Vincentian values of social justice and transforming society to serve the most vulnerable,” the statement partially reads. “We are called to provide access to high-quality education to all.”

The statement ends with Ghanem expressing solidarity towards the Black Lives Matter movement and remarking on the importance of education in regards to social change. The same quote was used in both stories reported by The DePaulia and 14 East Magazine.

“We know George Floyd, Breonna Taylor, Laquan McDonald and so many others should still be alive,” it reads. “We also know education can be part of making the change we all want to see in police departments. We support all who are working to make police reform a reality.”

Despite the sentiment, students remain unconvinced that the university understands the nuances of the issue.

“The message completely missed the point, no one is asking DePaul to cut ties because of a few bad officers, but because the entire system of policing is rotten to the core and rooted in racism and classism,” Terry said. “That can’t go away just by educating a handful of officers.”