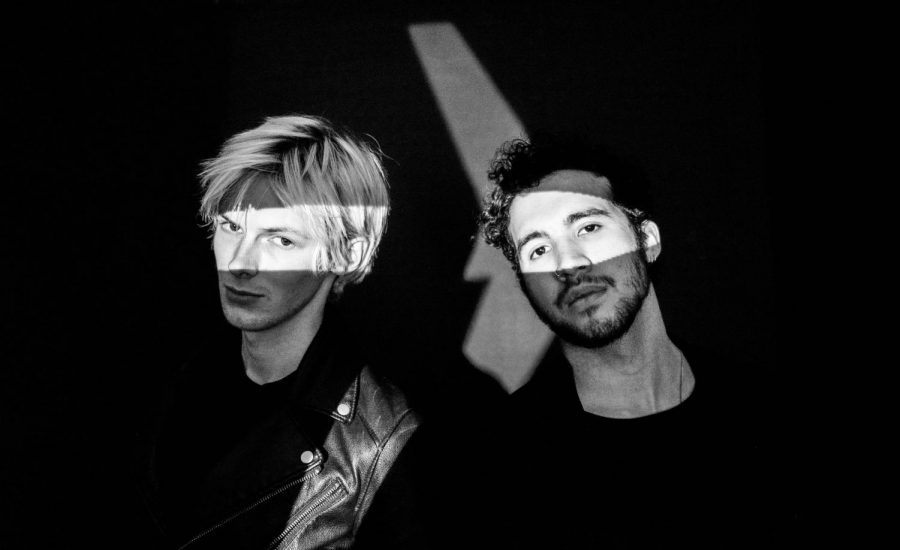 Caleb Hiltunen, lead vocalist for the alt-rock band Friday Pilots Club, took a brief pause before explaining what led to embarking on a path that makes a stop this Friday with the band’s single, “Breaking My Bones.”

“Do you remember the first time you ever listened to a song and you were in the right context?” he asked. “For me it was listening to ‘Evening Sun’ by the Strokes when I was driving down Allisonville Road in Indiana. And there was a feeling there that there was not a word for. I think that is what made me want to do music seriously.”

A few years later at Columbia College, Hiltunen met Drew Polovick and invited him to play a show for their band shortly after a member moved back to California. An hour later, Hiltunen said, he realized Polovick needed to be on full-time, and the two began writing music together in 2017.

Polovick, like so many other artists, including Hiltunen himself, grew up surrounded by music; his mother played piano and sang, his sister sang and his father played him the sounds of Pink Floyd and The Who. He said he became particularly drawn to rock music after seeing School of Rock in first grade and dipped his toes into several forms of music — playing, quitting and returning to the guitar, middle school orchestra and doing musical theater. Running the whole entire gambit, Polovick went to Columbia to study production and audio engineering, and the seeds of Friday Pilots Club, the band he’d be guitarist of and production-wizard for, were sewn.

As the band grew in stature, they caught the ear of Jon Freedman, who is now at Universal Music Group and has helped lead the release of “Breaking My Bones.” She’d been a fan before joining UMG and jumped at the opportunity to help in releasing their song.

“I found them on Spotify Discover, Discover Weekly, and thought they were fantastic,” said Freedman. “And so I followed their social media… I DM’d them and I let them know that I felt really strongly about their music, I thought they’d be going big places and I’ve just kind of been following their journey over the past two or three years.”

The true description of “alternative music” is hard to nail down, and like alternative music, describing what Friday Pilots Club is also can be difficult to nail down. They are alternative in the truest sense of the word, existing beyond just the box of one sound. They can put out an upbeat song like “End of It,” accompanied by a fun, 4:3 music video with grainy footage, but also put a lot of weight on a song like “Glory,” a sonically-intense song that shows how one reconciles the inevitability of death.

“We all want to push each other and challenge each other,” said Polovick. “And it’s so easy to go in and make a record and you’re like ‘Alright I’m going to use the same guitar chord for 12 songs.’ We want to really push ourselves and continue to innovate.”

Hiltunen describes Friday Pilots Club as “a venture of curiosity,” and that venture has led them to this Friday, when they will release “Breaking My Bones.” The single details the inescapable pressure of having to be somebody you’re not, particularly online. The fabricated version of yourself is put to the forefront of peoples’ perception of you, inducing a struggle to maintain it.

“It’s kind of like the user’s guide from hell,” said Hiltunen. “To how to completely contort yourself to where you receive all your validation from the way that people you don’t know interact with you online. And then the end is sort of coming back down to Earth and being like ‘Man, I don’t want to live this way, I don’t want to do this.’”

“Breaking My Bones” goes from a soft beat to a heavy one, with Hiltunen’s voice played by Polovick’s audio production. The sonic changes in the song, in Polovick’s eyes, represent the changes a person has to make in their lives to keep up an image. It’s a song that has been in the works since last April and has taken on several identities in becoming what it is now.

“This song went through so many versions and we finished it early February,” said Polovick. “And Caleb had really flushed out this lyrical concept. Which was super cool and, vocally he had never done anything [like that], like I like to say he flows on the beat. Which is somewhat of a new thing for us.”

In a moment of national reckoning over systemic racism in the U.S. and the relationship between police officers and citizens, on top of a pandemic that the country has lost control of, Hiltunen and Polovick understand the backdrop of their single release.

Polovick, whose mother is Black and whose father is white, acknowledges the pressure on him as a person of color in a music scene that lacks in diversity. Approaching the moment with delicacy and empathy has been the crux of their response, speaking out, but also knowing when not to say something and to instead elevate the voices who have a better understanding of what’s unfolded. It’s been a time of education and self-reflection.

Venue shows, in their eyes, are out of the picture through at least the rest of the year, so it will be some time before “Breaking My Bones” will be performed in front of a packed audience. Hiltunen sees masks becoming the norm at concerts, and in what could be a paradigm-shifting moment for the music industry, they’ve moved to streaming concerts online through and connecting with audiences through mediums like Discord or Twitch.

“Breaking My Bones” has been a process in the works since last April, and the various versions of it have led to what will come out this Friday. They plan on releasing another single at the end of the summer and an EP sometime in the fall, but in the meantime, they’ve used this period to reflect on the world around them and to write.

All through quarantine, social media has been the bridge to connect us with one another, and it may be the breeding ground for much-needed, drastic changes made in the country. But like most things on the internet, it can be a double-edged sword, and Friday Pilots Club hopes to make that message clear in their upcoming single.