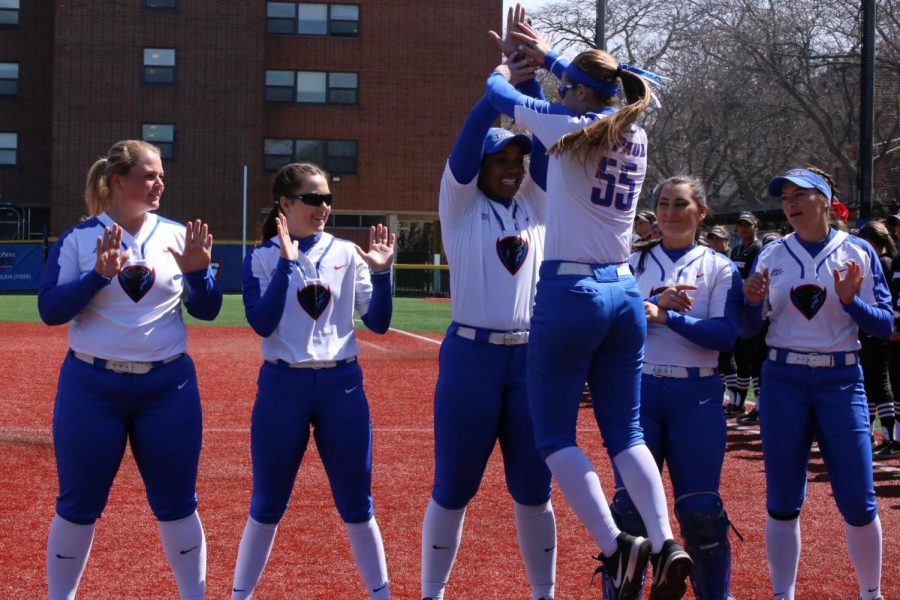 Morgan Greenwood celebrates with her teammates after defeating Providence on April 13, 2019.

Morgan Greenwood, who played for DePaul’s softball team from 2015-2019 and was a captain of the team, reached out to The DePaulia on June 30, saying the allegations against Lenti are “unequivocally false.”

“As one of coach Lenti’s former student-athletes, who was at every practice, home game, away game, and all the team meetings in between, I have an issue with what has been written in these articles,” Greenwood wrote in the email.

“I can honestly say that I was never grabbed, slapped, pulled, (including by my ponytail), punched, or physically assaulted in any other way by Eugene Lenti. I have never been called a f***ing whore nor have I heard him call any of my teammates f***ing whores during my time at DePaul.”

Brianna Viles, who also played on the team from 2015-2019, reached out to The DePaulia Wednesday to echo Greenwood’s claims, saying that it “breaks her heart” to hear of the allegations against Lenti.

“I would first and foremost like to openly deny any and all false allegations that Eugene was physically and verbally abusive to his players and staff,” Viles wrote in an email to The DePaulia. “Eug is a warm-hearted and family-oriented man. He was like a father figure to me and regardless of how I performed on the field, I always knew I could go to him for anything and everything, no matter what! Eug always had his players best interest at heart.”

Greenwood and Viles spent the first three years of their DePaul career playing under Lenti before he retired in the summer of 2018. In their senior year, they played under new softball head coach Tracie Adix-Zins, who also played softball under Lenti and was the 2007 Big East Pitcher of the Year.

Both Viles’ and Greenwood’s remarks directly contradict the accusations laid out by sports psychologist Dr. Jenny Conviser, who sued DePaul in April alleging verbal and physical abuse of players and assistant coaches by Lenti.

Conviser claims that as a mandated reporter of Title IX issues, she shared details of Lenti’s alleged abuse — including calling female softball players “f—–g whores” and punching their bodies — with the athletic department, and the office did not conduct an independent investigation of his behavior. If true, this would be a violation of Title IX, which says that immediate action, independent of law enforcement, must be taken by universities upon receiving notice of sexual violence or harassment.

The DePaulia reported on Conviser’s allegations in April. Read the lawsuit here.

The case is now in federal court after DePaul requested to move venues. DePaul also filed a motion to dismiss all charges in June, but their motion was denied as moot. Since then, Conviser has filed an amended complaint, which puts her more in the center of the case.

Conviser is accusing DePaul of wrongful retaliation under Title IX, breach of contract, defamation and false light, based on her mandatory involvement in reporting that Lenti had physically abused his female assistant coach and abused his female players.

Conviser is alleging that DePaul fired her because she blew the whistle on Lenti’s alleged verbal abuse in 2016 and punching an associate head coach in the face in 2018. In the new complaint that was filed in June, Conviser also said that she was at the heart of taking on athletic director Jean Lenti Ponsetto and taking down Lenti by having him removed from the university for his abusive conduct to his players.

“I can genuinely say that without Eugene Lenti, I would not be the person I am today,” Greenwood wrote in the email.

Greenwood declined an interview request with The DePaulia.