COLUMN: Why I won’t report my sexual assault to DePaul’s Title IX office 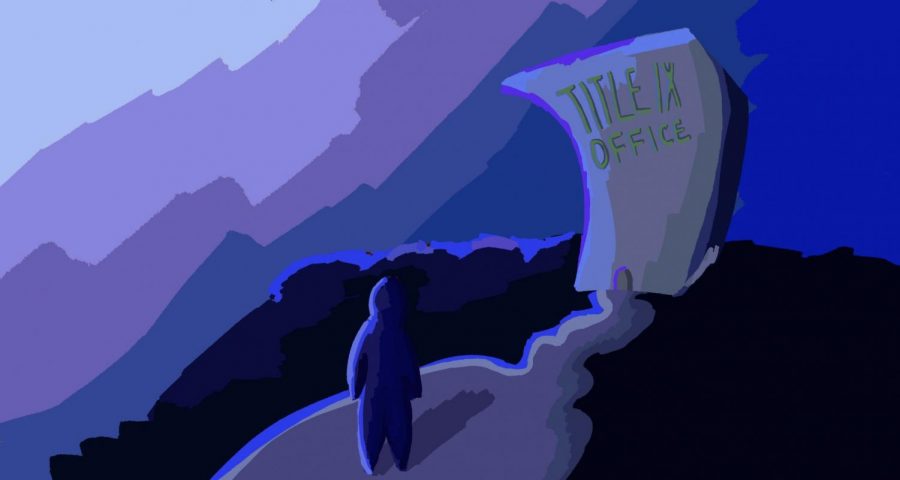 College is a fresh start, or so I thought. To say I was excited to leave my life in Kansas behind is an understatement. Stepping onto DePaul’s campus and immersing myself in this newfound city life was everything I’d hoped for and more.

While I was excited to acquire an education and go through newfound experiences, I was equally — if not more — excited to date around. I had the same high school boyfriend for years, and quite frankly, I wanted to embark on the typical American college experience, or my understanding of it.

I anticipated dating, which included going on romantic dates, maybe a one night stand or two and just straight up connecting with someone else. I was ready to explore romantic relationships in a way I never had before.

During my freshman year at DePaul, you better believe I checked Tinder as frequently as I did the weather app. Most of my relationships, whether it was a partner or simply a fling, stemmed from an online dating app. When I met someone through an on-campus organization and we hit it off right away, I thought this could be something real.

For the purposes of this story, I will call him Alex. Alex and I started seeing each other more regularly, and eventually, we started dating. We reached a point in our relationship where we were intimate.

I felt both physically and emotionally comfortable with him. Alex and I dated for a couple of months and while we were official partners, I asked him if we could keep our status discreet because I wasn’t sure how my ex would react if he knew how quickly I’d moved on.

Yes, we dated, but it wasn’t as public as my prior relationships — as in, we didn’t post about each other on social media. The only people who knew about our relationship were our mutual friends. Even then, not everyone knew.

While we were dating, we decided to go to a party. This was pretty typical for us. We were two college students who like to partake in normal college activities, like a good old fashioned house party, complete with beer pong, flip cup and lots of weed.

At the party, I began to feel anxious because his ex-hookup was there. I’m not an entirely jealous person, but I felt awkward playing a drinking game with my current partner and his ex. I decided to venture off with a friend, watching him converse with his ex from afar.

Soon my anxiety went up a notch, and I decided to deal with it in the best way I thought possible at the moment — I would drink the nerves away. I started taking long pulls and in this moment, I felt safe drinking at the party because I was with a female friend of mine. Soon after, I started feeling tipsy, then drunk, then everything turned blurry and Alex arrived.

Alex and I decided to leave the party. I remember grabbing my belongings and walking to the train station together, and that’s where my mind goes blank. The next memory I have is waking up in bed with Alex the following morning, naked.

When I opened my eyes, I recognized we were in my room, but I couldn’t remember how we got home the night before. I also saw that I was naked, which I wasn’t terribly concerned about. Maybe I just felt like sleeping naked next to my boyfriend, so what?

Then I saw two condom wrappers on the ground. When I saw them, it was like I could finally feel the pain I was experiencing. I was sore between my legs, my chest felt bruised and it really hurt to walk.

His eyes fluttered open and I asked hesitantly, “Alex, did we have sex last night?” He chuckled and said, “Oh you don’t remember? Yeah, we had sex, like a lot.”

My heart sank. Not even at the fact that I was violated. I felt so sad and frustrated because he laughed at my confusion and discomfort.

I asked Alex to describe what happened the night before after leaving the party. He said that once we got to the train station, I passed out on him. When it was time to get off at our stop, he admitted to holding me up and half carrying me home because I couldn’t stand up on my own.

When we arrived at my apartment, he said I couldn’t figure out which keys unlocked the door. Alex had to open it for me and help me to my room. Then Alex said that I asked him to have sex with me.

Violated. Scared. Hurt. Unloved. Those were some of the emotions coursing through my mind as I lay in bed next to my partner, clutching the covers tight around my body. I remember using the bathroom after our conversation, and it hurt so bad I couldn’t go.

I didn’t realize that my boyfriend had assaulted me, that he had raped my unconscious body. I never thought it was possible for someone I trusted to hurt me in the way Alex did. Never did I think I would fall victim to sexual assault on campus.

I stayed silent, and in a way, I still am silent in protecting his identity. I will continue to go to school with Alex, most likely having common classes together. I will continue living around, working with and learning with Alex for the next two years until we graduate.

I can’t stay totally silent any longer. Alex texted me a few weeks ago to “check in” and see how I was doing during quarantine. The most off-putting part of the interaction was the fact that he was being flirtatious, using emojis and it made me feel as if he wanted to potentially rekindle something with me.

I didn’t respond. I haven’t revealed Alex’s identity for a multitude of reasons. Particularly, my biggest fear is revealing his identity to have our mutual friends think I’m lying.

I’m torn because on the one hand, I fear that Alex will do this again with a future partner. On the other hand, I don’t feel emotionally capable of handling the social repercussions of accusing an ex of sexual assault.

It’s taken me a long time to come to the realization that Alex assaulted me. I ignored it for so long because we were dating at the time. I mean, we’d had consensual sex before; therefore, who would believe that this one particular incident was non-consensual?

I’m weary to go through the proper channels of reporting assault. In addition to the social repercussions, stories of other survivors’ interactions with DePaul’s Title IX office are concerning. There are reported accounts from other DePaul students who have tried but failed to receive the necessary support from the very institution that is supposed to protect us.

Another fear is being told that it was my fault I was assaulted. I admit to drinking more than I should have that night and smoking recreational marijuana. No one forced me to drink or smoke, but I was forced to have sex.

I will avoid reporting anything to the school for the time being because DePaul has not proven to me that they would take my case seriously. Particularly, when an anonymous DePaul student reported her sexual assault case, she described the process as belittling. In the same story, another DePaul student recounted a negative experience with a Title IX representative who came to speak to her freshman year class.

I also had a similar experience during my freshman orientation where we had a mandatory lecture on sexual harassment. I recall the presenter opening up the floor for questions. One male student asked sincerely, “If another person and I are both drunk, is it still ok to have sex with them?”

As far as I could tell this was a genuine question from an eighteen year old male, which I’m sure others were curious as to what the DePaul speaker would answer. She said that in instances where alcohol and other substances were involved, it would come down to a case by case basis.

I remember feeling put off by that answer. I exchanged looks with some of the friends I made in my orientation group and could tell we all felt uncomfortable by the presenter’s vague response. What I wish she had said instead was, “If there is any doubt in your mind as to whether something is consensual or not, don’t do it. If it’s meant to be, wait until you’re both sober.”

Most perplexingly, in an interview with DePaul’s then-Title IX coordinator Jessica Landis, she said, “you cannot give consent if you are incapacitated by drugs or alcohol.”

In the same interview, Landis also says the Title IX staff receive trauma-informed training. Despite this information, I am still skeptical of reaching out and working with the school because I fear it will have more negative impacts on my mental health and that ultimately, I won’t receive justice.

Additionally, at the time, all incoming freshmen at DePaul had to complete an online module about consent. Although we were in different orientation groups, Alex sat through the same presentation and completed the same module on sexual assault that I and all other DePaul freshman had to complete.

It’s difficult to say if DePaul had done a better job in educating incoming college students, maybe I wouldn’t be writing this today. There is always room for improvement when it comes to preventing sexual assault. But, I criticize DePaul for being negligent when it comes to talking about sexual assault and the largely insensitive way the Title IX office handles such cases.

Some of my friends at DePaul have also unfortunately fallen victim to sexual assault on campus. While it’s not my place to reveal their stories, they described similar instances including inadequate support from Title IX.

While I am currently staying silent about Alex’s true identity, I hope to arrive at a place where I have the mental capacity to reveal all the details about who he is. I am writing this opinion piece in hopes that he will read it and recognize what he did. Most importantly, I am writing this to urge DePaul to do better when it comes to protecting their students.