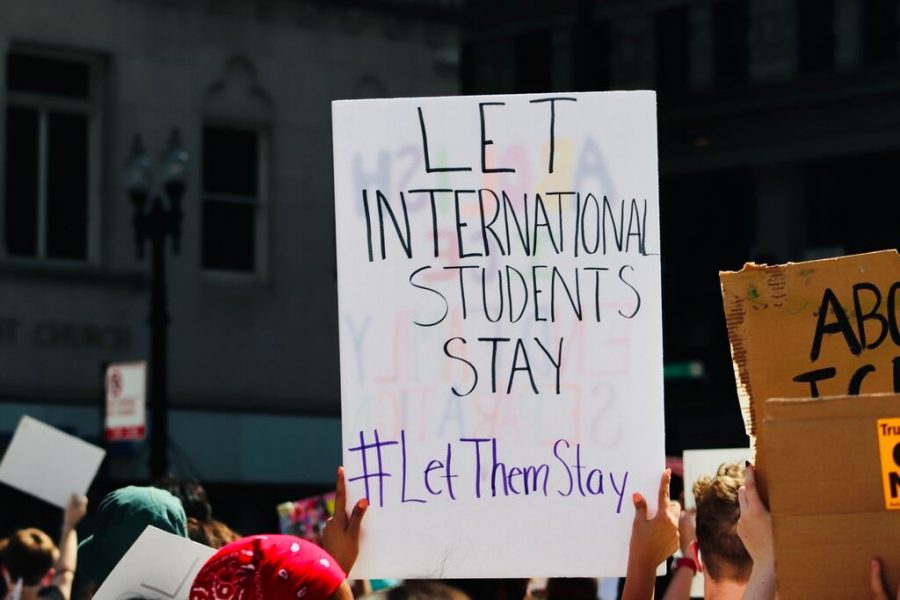 A protester holds a sign outside of Chicago's Immigration and Custom Enforcement center on July 10, 2020.

International students attending college in the United States will soon have to leave the country beginning fall 2020.

Immigration and Customs enforcement announced on July 6 that students cannot take fully online course loads, and may face deportation if they don’t comply. One DePaul student from South Korea was already denied entry into the U.S. on July 8, according to an amicus brief filed July 12.

The brief — which was filed in support of a joint lawsuit by the Massachusetts Institute of Technology and Harvard University asking to block the new ICE rules from going into effect — gained the support of Northwestern University on July 8, and DePaul on July 13.

Earlier today, the top attorneys general from 17 states including Illinois — plus the District of Columbia — filed a lawsuit against the Trump administration. The latest legal action against the ICE ruling seeks an injunction that would block the new ICE ruling.

Students attending hybrid classes may be permitted to stay– affecting over 1.5 million people studying in the U.S. on either F-1 or M-1 visas, with nearly 1500 enrolled at DePaul.

The decision came about as the Trump administration seeks to expand immigration restrictions while facing the ongoing pandemic, which includes the ban of work visas, green card suspensions, and limited authorization of asylum seekers.

“The policy change is unnecessarily punitive and puts our international students at a major disadvantage,” the statement read. “The new ICE rule limits the flexibility we have in determining the best ways to provide safe options for our students, faculty and staff. The potential impact may be devastating to many students who will be forced to give up their studies. Many who leave the United States will not return.”

Many campuses across the country have largely gone online in response to the coronavirus pandemic, while other schools are offering limited in-person courses this fall term.

Still, questions remain as to whether that can be done safely — which is why some fear ICE’s regulations may target international students who have no choice but to take classes online.

Schools like the University of Illinois Urbana-Champaign have said it will continuously test students for COVID-19 throughout the fall semester, using its own saliva test developed in-house.

Others, like DePaul, have only announced mask requirements and additional social distancing rules for foot traffic on campus. DePaul will also offer a mix of on-campus and online courses for the fall.

As for the DePaul’s Office of International Student Services, director Hiwoté Tamrat said that they are still in the process of getting further clarification in regards to the guidelines.

“We share your frustration, and we want you to know that we find the spirit of the guidance unnecessarily punitive,” she said, in a statement. “DePaul recognizes that, as an international student, you have the same needs, fears, and concerns of all other students when considering how to continue your education in the Fall and should be allowed the same flexibility, with your health and safety as primary concerns.”

With limited access to in-person programs, the news release could increase uncertainty and place a new hurdle for immigrants.

Despite this, some professors have said they’ll offer workarounds to affected students.

“Without official action by @NorthwesternU, I will offer an in-person independent study (on any topic of their choosing) to any graduate student of @PoliSciatNU who holds an F-1 visa and needs such a class to remain legally in the United States,” said Northwestern political science professor William Hurst on Twitter.

Other schools, like NYU, Brown, and Columbia, have said they will offer hybrid classes with in-person components to lessen the risk of deportation.

Students at the University of California at Berkeley are taking matters into their own hands, creating 1-credit in-person courses so that affected students can avoid taking all-online courses and not have to transfer.

To date, DePaul has not offered specific solutions to the new ICE ruling beyond its already-planned combination of in-person and online courses.

“We will do what is in our power to do, consistent with our laws and with public health guidance,” the statement from today read. “We urge those in positions of public authority to take any action appropriate to reverse this unwise and unfortunate decision.”

The DePaulia/ La DePaulia will continue to follow-up on this story as it develops.

Update (7/7/2020): The DePaulia/ La DePaulia has contacted the Director of DePaul’s Office of International Student Services multiple times and we have yet to hear a response.

Update: (7/8/2020): The story has been updated to include a response from DePaul’s Office of International Student Services.

Update (7/8/2020): The story has been updated to indicate the filing of a lawsuit by MIT and Harvard asking to block ICE’s efforts. Northwestern University joined an amicus brief late Wednesday in support. It also now reflects the efforts of other universities across the country to mitigate the rule’s effects.

Update (7/13/2020): The story has been updated to reflect DePaul’s joining of an amicus brief in support of MIT and Harvard’s joint lawsuit seeking to block the new ICE rules, as well as information from that amicus brief regarding a DePaul student.